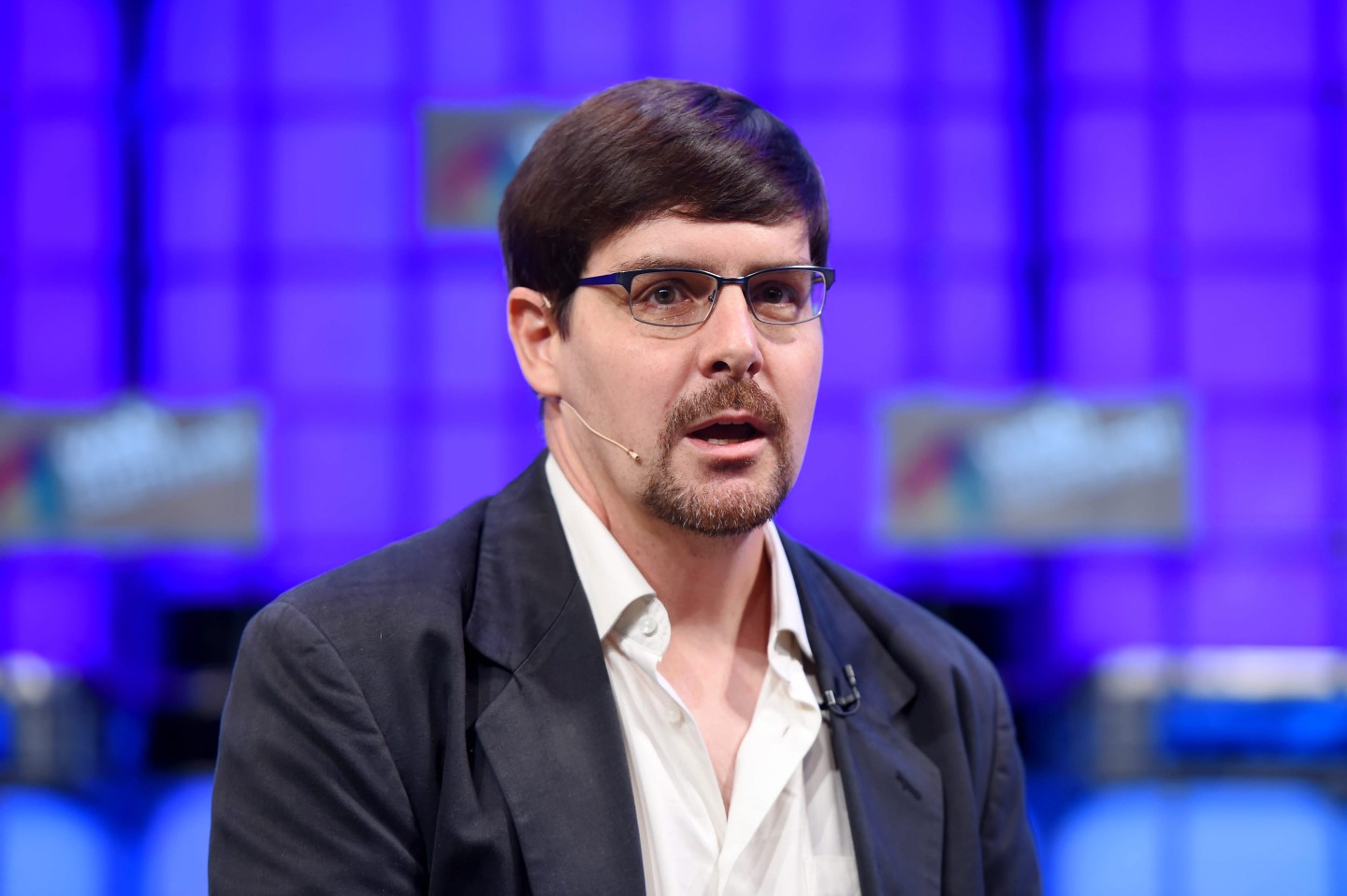 2014 wasn’t a banner year for Bitcoin speculators—its price was down nearly 60%—but it has left the community of developers who support the digital currency more optimistic than ever. New applications, exchanges, products, and uses for the Bitcoin technology are emerging every week.

Unlike large companies such as Apple (AAPL) or Tesla (TSLA), Bitcoin developers operate as an open community—no organizational structure necessary. If there is a single leader guiding the vision, it’s Satoshi Nakamoto, the pseudonymous inventor of the Bitcoin protocol who remains mysterious and mostly silent since a 2011 e-mail that said he’s “moved on” and left Bitcoin “in good hands with Gavin and everyone.”

“Gavin” is Gavin Andresen, the chief scientist of the Bitcoin Foundation. Modeled on the Linux Foundation, Andresen’s organization fosters the success of the Bitcoin technology and supports its community of developers. Fortune caught up with Andresen to ask him about how Bitcoin went from idea to reality and where it’s heading from here.

How did cryptocurrencies emerge, and where do big ideas like Bitcoin come from?

In the ’90s, there was a group of people called the cypherpunks who were pushing to get encryption technology declassified. It used to be you couldn’t create encryption products and ship them overseas because they were classified as a munition and the U.S. government didn’t want you shipping munitions overseas. The notion of software being a munition seemed ridiculous to these people, so they began to change the way that technology was seen and used. It’s thanks to them that we have good encryption that lets things like e-commerce work on the Web.

There was also a lot of talk back then about digital cash and whether there was a way to pay for things that doesn’t require you to trust a government or central authority. They never quite figured that part out. So all the ideas were there, but until Satoshi Nakamoto had this brilliant idea of how to solve the trust problem, it never really took off.

Companies were created and failed, basically because they were single points of failure. In the case of U.S. dollars, we really trust the U.S. government not to screw up our money. But the U.S. government is the single point of failure. I keep a Zimbabwe 100 trillion dollar note in my wallet just to drive home the point to people that this is what can happen if you put your trust in a single entity and it screws up your money.

How much of the early interest in Bitcoin was driven by a desire for a decentralized currency versus people who were just curious about how the technology worked?

It depends on the person. I think there were some people who were interested in digital cash as an interesting problem to tackle. There were academics and researchers. And there were computer hackers who did things just because they could be done—the same reason why people climb Mount Everest: because it’s there. It’s an interesting challenge. There were certainly a lot of people inside the cypherpunks who were interested in privacy—who were trying to keep financial transactions private.

I think that still drives a lot of the Bitcoin world. There are a lot of people not happy with the idea of their entire financial lives being subject to either governments, or even worse, some random hacker suddenly knowing every purchase that you ever made. Sooner or later, one of the credit card companies is probably going to suffer a major breach, and we will probably see everyone’s transactions for some period of time showing up on the Web somewhere. I think that motivates a lot of people to try find a solution where you’re not giving up your privacy to some central organization that you’re forced to trust.

What was it about cryptography that solved a lot of these problems?

The piece of cryptography that Bitcoin uses is something called public key encryption. It’s a piece of technology that makes the secure Internet work well. The idea is that you can keep a secret and then prove that you have a secret piece of information without revealing that piece of secret information, which is really a neat mathematical trick. It turns out that you can use this trick to very securely transfer digital tokens from person to person.

So I can create a digital signature that says I am sending some Bitcoins to another person and transmit that transaction on the Bitcoin network, and everyone can it. You can think of it as a kind of a wax seal that they used to use for sealing envelopes. If you saw that the wax on the envelope had the king’s impression, you could be sure it came from the king because he was the only person who had that stamp.

These transactions on the Bitcoin network work the same way. You sign the transaction using what is called the private key. And through this crypto-math magic anybody can verify that only the person who owns that private key could have authorized that transaction. That’s what keeps the whole Bitcoin transaction network secure. It’s this weird combination of mathematics and also the consent of the governed.

If Bitcoin is designed to work without a central government, what does governance mean in the Bitcoin ecosystem?

When the rubber meets the road, it means: What is the code that is actually running? What is the software that people download and run? Because that’s really what determines what Bitcoin is. So the governance process is convincing the people who write the code—which used to be a small, core group of developers—that this is the way that we all should do things. Then everybody writes their code so that it all talks to each other. And this is essentially the same way the technical parts of the Internet get implemented.

Is there an analogy between what’s happening in Bitcoin today and the early years of the Internet, when the browser made it more user-friendly and people jumped in?

Definitely. I just ordered a hardware wallet for myself from a company called Ledger. It’s a USB device I can plug into my computer and it will store my Bitcoins. One of the big risks of having Bitcoins is having a computer hacked and the Bitcoins stolen. Ledger is an example of an innovation that’s happening that could make it much easier and safer to use Bitcoins. There are other companies working on different form factors and different security models.

All of this is happening as we speak, and it’s exciting. It is like the early Internet where even using e-mail was hard. You worked for university that had an IT department that set up an e-mail account or in time you had a service like AOL. Now we have Gmail and it’s really easy for everyone to use e-mail. Bitcoin is definitely at the beginning of that evolution.

Finance is intensely regulated, and often regulated differently in different countries. How are regulators thinking about Bitcoin?

In the last year, the regulation picture has gotten a lot clearer in the U.S. and most of Europe. And that’s fantastic. I think that’s why you’re seeing companies like Microsoft and Dell accepting Bitcoins. If people pay you in Bitcoins for products and services, it’s clearer now what taxes you owe, how you treat Bitcoins, and so on. In other parts of the world it’s still fuzzy. If I was living in a country where the regulators hadn’t said one way or another how these newfangled cryptocurrencies should be treated, I’d be more worried.

What are some of the bigger challenges that need to be tackled before Bitcoin can begin to reach its potential?

There’s a non-technical chicken-and-egg problem that I’m worried about right now. How do people get Bitcoins in the first place? How do people earn Bitcoins so that they have them to spend? If you have to jump through some hoops—if you have to go to some exchange or buy Bitcoins with a credit card—that makes it a lot less attractive. You really want some natural way for people to get Bitcoins, as part of their paycheck or some other activity so they can turn around and spend them. It’s much better if the Bitcoin economy is a self-contained thing.