Why bitcoin is poised for big momentum in 2015 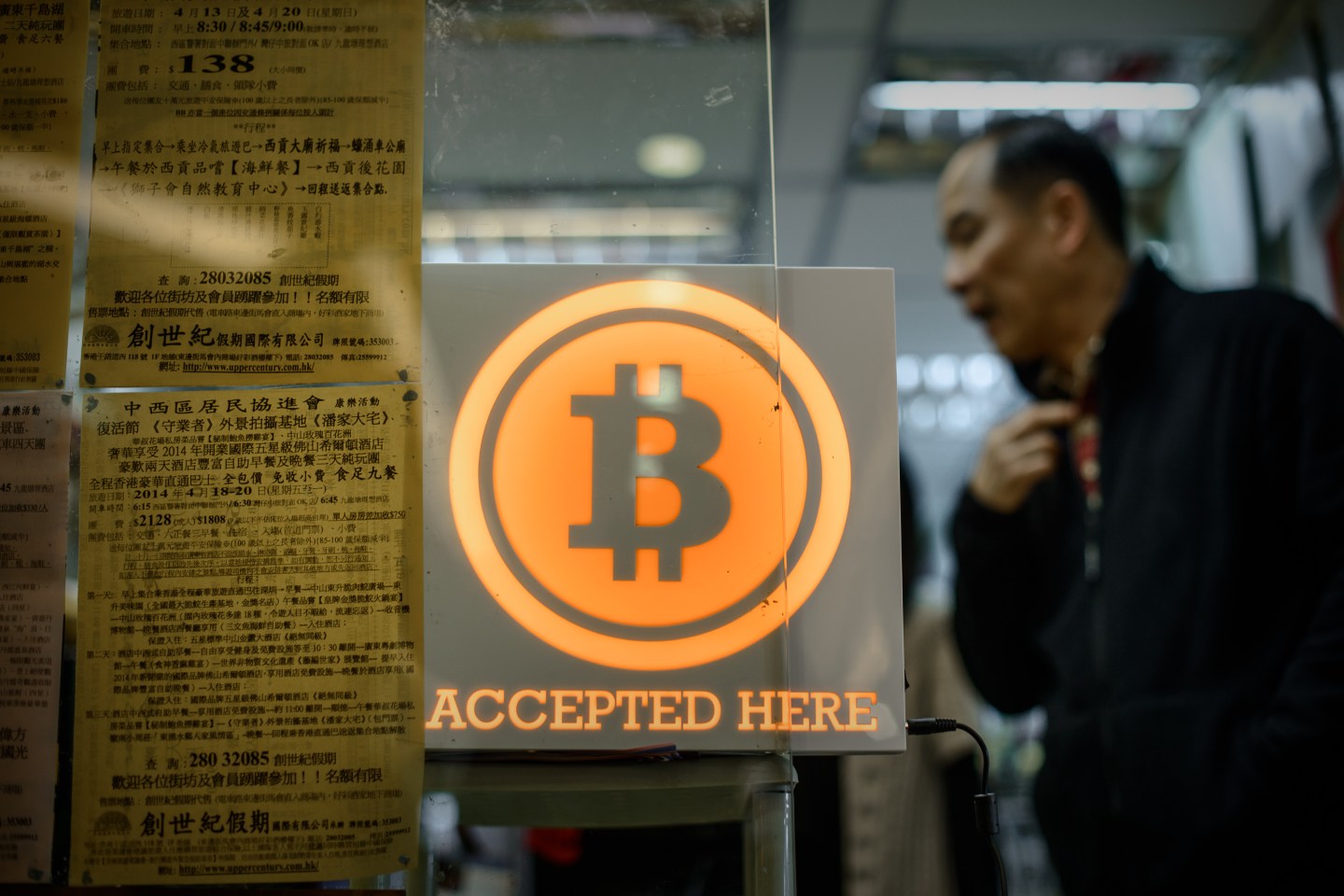 A man walks out of a shop displaying a bitcoin sign during the opening ceremony of the first bitcoin retail shop in Hong Kong on February 28, 2014. Bitcoin was invented in the wake of the global financial crisis by a mysterious computer guru using the pseudonym Satoshi Nakamoto and unlike other currencies, it does not have the backing of a central bank or government. AFP PHOTO / Philippe Lopez (Photo credit should read PHILIPPE LOPEZ/AFP/Getty Images)
Photograph by Philippe Lopez — AFP/Getty Images

It was not an auspicious start to the new year for bitcoin investors.

Over the first weekend of 2015 the second-largest bitcoin exchange, Slovenia-based Bitstamp, was victim of a hack to the tune of some $5 million U.S. dollars’ worth of the digital currency. As the tech press were quick to point out, it was a worrisome start to the year for a digital currency that Quartz had already declared “the worst investment of 2014.” And if you look at its performance between Jan 1, 2014 and Jan. 1, 2015, that’s not wrong: bitcoin ended the year at 39% of the value it started with.

In reality, bitcoin displayed major momentum in the last year as both a technology and a movement, and looks poised to convert more skeptics in the year to come. The metrics in a range of areas prove it: the number of bitcoin-related startups and jobs has boomed; the number of accepting institutions has bloomed; and activity among developers is greater than ever.

For starters, breaches like that of Bitstamp and the much larger (valued at about $400 million at the time) 2011 hack of the exchange Mt. Gox are often misconstrued as security issues with the currency itself. But they are only signs of flaws in those particular exchanges and not a sign of an issue with the underlying technology. And it is the underlying technology behind bitcoin that most excites. As we wrote in the “Shape the Future” package of our January 2015 issue, most of the vocal enthusiasts so bullish on bitcoin—from big-name entrepreneurs like Marc Andreessen to the developers and miners who spend their days refreshing the bitcoin Reddit page—are more interested in the applications that can be built on bitcoin’s “block chain,” the currency’s foundational backbone, than they are in bitcoin as a monetary system. The block chain allows the secure exchange of any form of value between two entities.

One of the most discussed potential use cases of the block chain is as a decentralized Uber. Instead of using an app, customers could order a car and pay the driver directly, cutting out the middleman. (Sorry, Travis Kalanick.) The block chain can be utilized for everything from the storage of secure documents (that is, a decentralized Dropbox, too) to “watermarking,” in which a specific coin could contain, say, the deed to your house. “The block chain is going to spawn decades of innovation,” says Ryan Selkis, director of investments at the Digital Currency Group, created by former SecondMarket founder Barry Silbert. “It could lead to things like frictionless share issuance, title transfers, smart contracts. Collectively these things make up the backbone of the economy. If you wanted to create a decentralized Uber, Dropbox, Facebook, you could reinvent the Internet.”

The block chain has such rich potential that there is an initiative underway to create additional “side chains,” though there is controversy around that idea. Side chains would allow for experimentation apart from the block chain. “We don’t really want to mess with the main block chain right now,” says Adam Ludwin, CEO of Chain, a block chain API that makes it easier to create bitcoin applications. “It works, we don’t want to break it.”

For now, most of the activity around bitcoin is monetary in nature, so it makes sense that its critics point to volatility. Though the value of one bitcoin in U.S. dollars has fallen 67% in the past year, its value over the past two years is up 1,879%, according to the market price chart at blockchain.info. So whether it’s a good investment or a bad one is a matter of perspective.

In the meantime, the sheer total of bitcoin-related startups that launched in 2014 demonstrates bitcoin’s momentum. There is no definitive listing of every single bitcoin startup, but 2014 almost certainly saw the launch of more of them than in any year prior. Data that AngelList sent to Fortune confirms that. In 2011, five bitcoin startups listed themselves on AngelList. In 2012 that number grew to 13. In 2013 it jumped to 193, and last year it exploded to 566. (But not all startups register on AngelList immediately, if at all.) In addition, on January 8 the total number of daily bitcoin transactions hit an all-time high, as Barry Silbert eagerly tweeted.

Developer activity is also at a fever pitch. According to the contributor graph at GitHub, the total number of contributions to bitcoin’s master code in November was the highest it had been since spring 2012. Bitcoin is also the 31st “most forked repository” on GitHub—”forks” are basically proposed or in-progress alterations to core code—out of more than 900,000. In other words, for developers, bitcoin is trending. The number of open jobs currently posted at bitcoin companies also underscores developer interest: it’s at 105, which is close to the all-time high in September of 137, according to Bitcoin Pulse, which monitors such trends.

Academics appear to be more interested in the cryptocurrency than ever before. There were 190 white papers published on bitcoin in 2014, up from 55 in 2013. Authors—amateur or otherwise—have also flocked to bitcoin: Amazon lists 437 books about or involving the term “bitcoin” published in 2014, compared to 143 in 2013. (That is based on a subject search, and thus includes less hard-hitting titles like Bitcoin Bimbo 3: Undercover Cop Science Fiction Erotica.) And sports fans this year may not have been able to ignore the inaugural Bitcoin St. Petersburg Bowl, a college football playoff game between North Carolina State and the University of Central Florida. ESPN quickly converted BitPay’s $500,000 rights fee for the game into U.S. dollars.

Another indicator of bitcoin’s momentum is the number of mainstream businesses that accept it. In 2014, Microsoft (MSFT), PayPal, Dell, and Dish Network (DISH), among many others, announced they would accept bitcoin as payment for a range of products. Those companies joined companies such as Target (which accepts Gyft, which can be purchased with bitcoin), Overstock.com, and WordPress. Even the publisher of Fortune, Time Inc. (TIME), began accepting the cryptocurrency for magazine subscriptions. Yahoo (YHOO) also added bitcoin to its Yahoo Finance tracking site last year, lending the currency additional legitimacy, and Google Finance (GOOG) quickly followed suit. “Adoption of bitcoin is becoming more commonplace, and we feel it is relevant to our industry and to our users,” a Yahoo spokesperson told CoinDesk. Don’t be at all surprised if Yahoo soon goes even bigger on bitcoin—whether by acquiring a bitcoin startup or some other announcement—as part of CEO Marissa Mayer’s ongoing effort to make the stalling search giant more hip.

Rafael Corrales, a partner at Charles River Ventures, believes that the growth in a wide range of fields—from academia to infrastructure to policy—is a sign that 2014 was the biggest year bitcoin has had yet, despite its volatility. “In the short-term, that’s an easy knock from people who don’t understand or believe it can be something,” he says. “It’s the easiest thing for them to go after. In that transition stage, you’re going to have extreme volatility, so looking at its value over one year is kind of silly.” As for occasional hacks, he adds, “There are going to be bumps in the short term, but they’ll be solved sooner than later. And these things are being addressed by a huge community of people. So you have to be really excited, despite small bumps.”

To be sure, that excitement can certainly lead to unrealistic declarations from those in the community. Some bitcoin developers and investors proclaim that within five years, all the major banks will be accepting bitcoin. That’s a stretch, acknowledges Peter Smith, president of the bitcoin wallet Blockchain (not to be confused with the actual bitcoin block chain). “I hear a lot of predictions about how soon the whole world will be using bitcoin, and most of the time, those are unrealistic,” he says. “What we’re trying to do as an ecosystem is incredibly audacious, so it’s going to take a lot of time.”

How much time? And to what extent will bitcoin, in seeking wide adoption as a currency and as a protocol for new applications, face the hurdle of mainstream consumers’ lack of understanding? Adam Ludwin suggests that people don’t need to understand how the technology works to appreciate it. “It has the quality of early Internet,” he says. “People don’t actually know anything about how it works, but they don’t need to know, or care. They just know they turn their computer on and can check email.”

As for bitcoin in the mainstream banking system? “We are still a good year away, in our estimation, from where you can imagine a known financial services company using this,” Ludwin says. “But it’s not 10 years. And when it happens, people will be surprised by how quickly it spreads.”

This article has been updated: it initially stated that the value of bitcoin was up 95% over the past two years; in fact, it is up 1,879%.