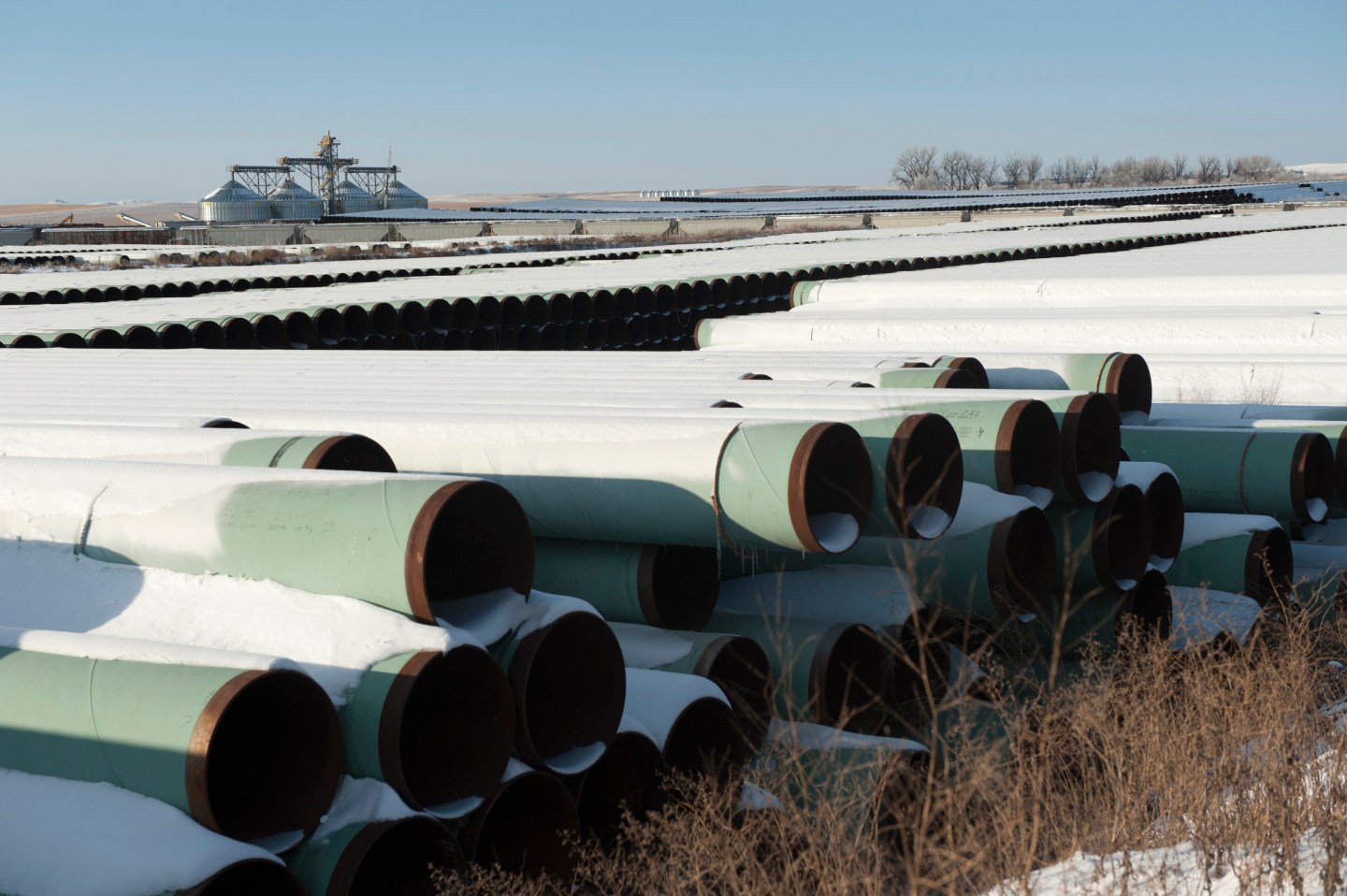 A depot used to store pipes for Transcanada Corp's planned Keystone XL oil pipeline is seen in Gascoyne, North Dakota November 14, 2014. The Republican-led U.S. House of Representatives approved the Keystone XL pipeline on Friday, but a similar measure struggled to get enough support in the Senate and President Barack Obama indicated he might use his veto if the bill does get through Congress. REUTERS/Andrew Cullen (UNITED STATES - Tags: ENERGY BUSINESS) - RTR4E84D
Photograph by Reuters

President Barack Obama will give his annual State of the Union address Tuesday night with energy and climate change as likely talking points. There’s plenty to say, of course.

Gas prices have dropped sharply over the past six months to an average of just over $2 a gallon, according to AAA. Meanwhile, a bill to start construction on the Keystone XL Pipeline, a proposed 1,179-mile long pipe carrying up to 800,000 barrels of oil from Canada to the Gulf of Mexico, is near the top of the agenda for the Republican-controlled Congress.

Two weeks ago, the House of Representatives approved its version of the Keystone bill. The Senate is moving toward a similar vote in the coming weeks after similar legislation failed to pass by a single vote in November.

On Tuesday, the White House reiterated that the president would veto any Keystone the bill. Instead, it said the State Department should be the one to review the proposal and decide whether to allow the project to move forward.

“The bill’s requirements could force agencies to make decisions based on incomplete information or information that may not be available, including potential environmental and community impacts of the proposed pipelines, within the stringent deadlines, and to deny applications that otherwise would have been approved, but for lack of sufficient review time,” the White House said in a statement.

Paul Dickinson, the executive chairman of CDP, a non-profit focused on studying business and the environment, said he “very much” hopes the president will discuss climate change during his address. Dickinson explained that the speech can rally environmentalists and the U.S. public against industry lobbyists who he said don’t have the best interests of the American people in mind.

“I hope that his considerable powers of oratory will make the people of the nation [understand] the severity of the situation,” Dickinson added.

Dickinson said that it’ll be interesting to see how President Obama brings up the Keystone Pipeline, if at all, because its controversial nature and potential harmful impact on the environment.

“The tar sands flowing through the pipeline will result in pollution that causes serious illnesses like asthma and increases in carbon pollution – the main cause of climate change,” said California Democratic Sen. Barbara Boxer, a critic of the bill, recently.

Frank Maisano, an energy specialist with international law firm Bracewell & Giuliani LLP, was confident the president will tackle issues related to energy and the environment. If so, it would be a change from previous addresses in which he said the topic was an “afterthought.” He added that the president probably “won’t get into the nitty-gritty,” however. Instead, Maisano expects him to talk about lower gas prices rather than dive deep into a sensitive issue like the Keystone Pipeline.

“I’m sure he’ll [discuss] gas prices – how it’s lower and the consumer impact – and figure out a way to take some credit for it, which will create more of a consternation among the oil industry,” he said.

President Obama could also speak about his efforts to tackle climate change, including his historic deal in November with China to limit emissions. The deal calls for the U.S. to lower its greenhouse gas emissions 26% to 28% by 2025. China, meanwhile, needs to cap its own emissions by 2030.

The president is expected to ask Republicans for $3 billion for an international climate fund, according to Reuters, which may make the State of the Union address vital to engaging the public’s support.

“Along with other nations that have pledged support, we’ll help vulnerable communities with early-warning systems, stronger defenses against storm surges, and climate-resilient infrastructure,” said Obama about the fund ahead of the start to the G20 summit in November.

But Maisano wasn’t too confident that the president will bring up the deal with China during his speech Tuesday night, especially as it relates to getting the $3 billion needed for the fund.

“It would be a controversial point and, frankly, I would be surprised if he mentioned it because Americans don’t really like giving money away to foreign countries,” said Maisano.

For more, check out Fortune’s recent explainer about the Keystone Pipeline saga.