Smog-choked China cuts a climate deal with Obama, and tries to tame its coal beast 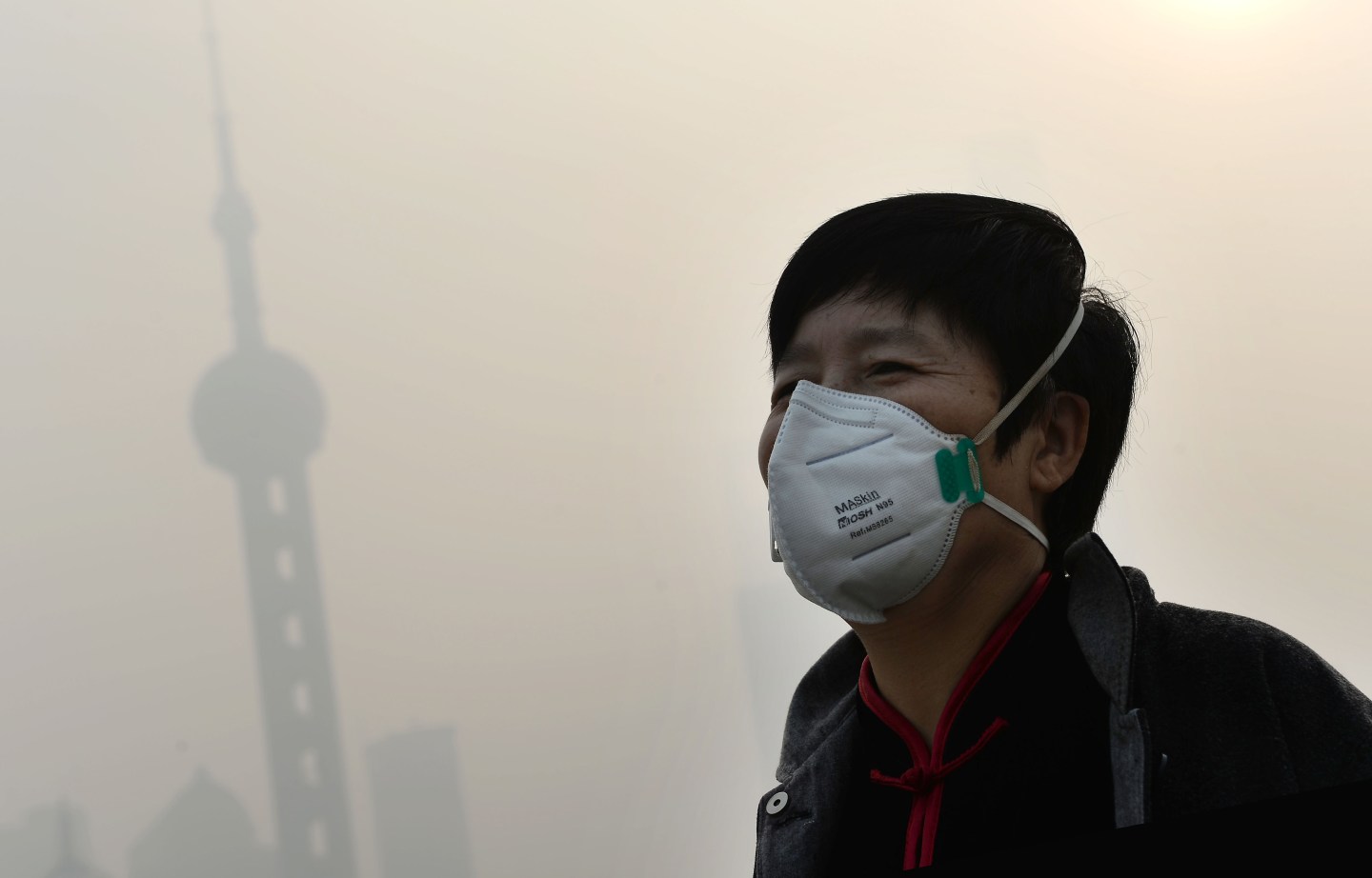 A man wearing a face mask visits the promenade on the Bund in heavy smog in Shanghai, China, 12 November 2014. The heavy pollution shrouded Shanghai Wednesday (12 November 2014) morning as the air quality index peaked at 261 by 9am, the Shanghai Environmental Monitoring Center said. The main pollutant was PM2.5 particles, the density of which surpassed 200 micrograms per cubic meter in the morning, said the center. People with weak respiratory systems are advised to stay indoors.
Photograph by Lai Xinlin — Imaginechina/AP

This week’s landmark agreement between the U.S. and China on limiting emissions of carbon dioxide marks a significant diplomatic milestone in the struggle against global climate change. The fact that the two largest sources of CO2 have finally agreed to do something about it should, in theory, give a boost to next year’s United Nations climate summit. Whether the actual terms of the deal—which calls for the U.S. to reduce its greenhouse gas emissions by 26% to 28%, compared to 2005 levels, by 2025, and for China to cap its emissions by 2030—have a realistic shot at being met is another question.

On the U.S. side, Republicans emboldened by the midterm elections will work to block any attempt to fulfill America’s side of the bargain, which Republican Sen. Jim Inhofe, of Oklahoma, soon to be chairman of the Senate Environment and Public Works Committee, called “a non-binding charade.”

China’s challenge in meeting the terms of the bilateral agreement are not political but structural: simply put, to reduce emissions growth, China must reduce the size of its coal industry, which supplies some three-quarters of China’s electricity. That is no easy task.


But Beijing must take action, because the smog-choked nation can hardly stick with the status quo. The climate deal is part of a larger strategy to address China’s pollution crisis.

The costs of China’s heavy reliance on coal for power generation were highlighted again days before the deal with President Obama was announced, when a pair of researchers at the prestigious Tsinghua University released a study showing that around 670,000 people die prematurely every year as a result of air pollution from coal. Every ton of coal produced in China adds more than 286 yuan ($46) in environmental damage and health costs, reported Teng Fei, an associate professor at Tsinghua University. China produced nearly 4 billion tons of coal in 2013, according to the World Coal Association.

The Tsinghua study follows a 2011 report by the World Health Organization, published in The Lancet, that estimated that 1.2 million people in China died in 2010 from diseases related to all forms of air pollution. China also has by far the deadliest mining industry in the world: One thousand forty-nine coal miners died in accidents in 2013, down 23% from the year before but still far more than any other country.

Mounting evidence of coal’s environmental damage comes as China’s slowing economy has reduced demand for electricity, creating an oversupply crisis for an industry that has known nothing but steady growth for the last three decades. China has reached “a very critical moment in the management of its coal resources, and in the history of the coal industry,” says Cao Xia, a professor of environmental law at Shanxi University of Finance and Economics, in China’s coal heartland, Shanxi Province.

The direct, domestic impacts of the nation’s massive coal industry, which produces and consumes about as much coal as the rest of the world combined, are added to the indirect, worldwide costs in terms of greenhouse gas emissions. No international program to combat climate change can succeed unless China slashes its burning of coal.

“The actions China takes in the next decade will be critical for the future of China and the world,” wrote Fergus Green and Nicholas Stern in a research paper for the Center for Climate Change Economics and Policy, in London. “Whether China moves onto an innovative, sustainable, and low-carbon growth path this decade will more or less determine both China’s longer-term economic prospects … and the world’s prospects of cutting greenhouse gas (GHG) emissions sufficiently to manage the grave risks of climate change.”

Facing mounting public outrage over air and water pollution, the central government’s actions to limit coal use have multiplied in recent months. The Airborne Pollution Action Plan, unveiled by the central government in September 2013, calls for a reduction of air pollution in the northern region surrounding Beijing by 25%, and 20% in the Yangtze River Delta.

Already, strict limitations on coal use in major urban areas, including Beijing and Shanghai, are in place. Planning to cap total coal production at 4.1 billion tons as of 2015, the government said in October it will no longer approve new coal mining projects below 300,000 metric tons (330,000 short tons), effectively banning the small, unregulated mines that have contributed to the coal glut. Hundreds of small mines have already closed, and the government has also taken steps to restrict imports of “dirty” coal—i.e., coal with high levels of ash and sulfur. (Although China’s coal market is oversupplied, imports continue because domestic transport issues mean it’s often cheaper to purchase coal shipped from Indonesia or Australia than buy domestic coal from the northern provinces of Shanxi and Inner Mongolia.)

At the same time, though, China is embarking on a grandiose plan not to shut down the coal industry but to move it inland, away from the big cities of the coast and from the prying eyes of international environmental groups. As I reported for Fortune from Shanxi Province in April, coal producers, under the direction of the central and provincial governments, are building huge “coal bases” in the northwest provinces that will include large mines, power plants connected to coastal cities via gigantic high-voltage transmission lines, huge plants to convert coal to liquid fuel, and related facilities such as concrete plants and chemical plants.

[fortune-brightcove videoid=3666787681001]
This huge migration and consolidation may well clean up the skies in cities like Beijing, Shanghai, and Shenzhen, thus reducing rates of respiratory disease and deaths linked to air pollution. It could also rationalize the coal industry, better matching supply to demand, and reduce China’s imports of foreign oil. What it won’t do is reduce the country’s overall carbon emissions; in fact, it could drastically increase them, as more coal gets burned and more carbon-intensive processes – particularly coal-to-liquids conversion – are expanded.

“We are very concerned” about the coal-base plan, says Ailun Yang, a senior associate with the World Resources Institute who focuses on energy issues in China. “Enforcing tougher air pollution standards along the coast will lead to shutting down coal plants, and create demand for a lot more gas. The western parts of China want to supply the gas by turning coal into gas. That process will be very, very bad for the world.”

Headline writers often refer to China’s “addiction” to coal. The relationship might be better thought of as a bad marriage, where neither partner can afford to leave. China needs the coal industry to fuel its demand for energy, which will surely continue to rise as the economy grows (even at rates of 7% to 8% a year, rather than the red-hot 10% to 12% annually of the last decade) and the middle class expands. The coal industry, of course, requires rising demand to continue to grow, to generate returns on its huge capital investments of the last decade, and to provide jobs for the hundreds of thousands of people who work in coal mines, coal plants, and related industries. In Shanxi, Inner Mongolia, and Xinjiang, entire cities depend on coal production and processing.

Coal in China has created an economy within an economy, and reducing the size of the coal industry would result in massive unemployment across large swaths of the country. Notwithstanding China’s huge push on renewable energy and natural gas, it’s hard to see how this co-dependency will be broken any time soon.

That’s not to say there’s no hope. China’s overall energy intensity (the amount of energy required to produce a given unit of GDP) has gone down in recent years, as the export-led economy shifts toward higher-tech products and services. Most areas of the country are on track to meet or exceed energy-conservation targets for 2015, according to the National Development and Reform Commission (as reported by Reuters), and the rate of growth in energy use is expected to fall by half this year compared to 2013. According to China-based researchers for Greenpeace, the total amount of coal burned in the first three-quarters of 2014 was 1% to 2% lower than the same period a year earlier.

“The data suggests the world’s largest economy is finally starting to radically slow down its emission growth,” wrote the Greenpeace analysts.

Still, the coal beast on the mainland continues to grow. In October, just as the results of the Tsinghua University study of coal fatalities was being released, the national news agency Xinhua reported that a huge coal field, containing 12.8 billion tons, had been discovered in western Xinjiang. Mining has already begun.