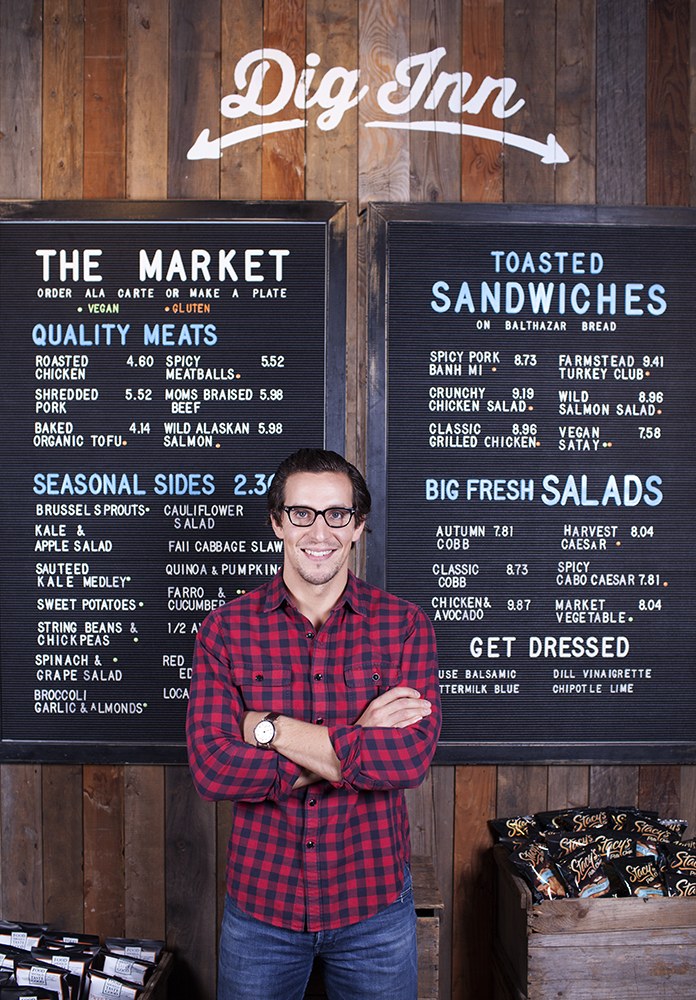 Farm-to-table restaurant chain Dig Inn Seasonal Market has raised $15 million in its Series C round, bringing its total funding to $21.5 million since launching in 2011.

The round was led by Wexford Capital, with other other participants including Monogram Capital Partners, founding partner of Riverwood Capital Michael Marks, and existing investor Magnus Hoglund, founder of Law360. Dig Inn founder and CEO Adam Eskin was once a private equity associate at Wexford Capital.

Most of the investment will go toward expanding the 10-restaurant chain, which has some $35 million in annual sales. The company plans to open another five to seven restaurants in 2015, including its first outside New York City. Eskin thinks Dig Inn has the potential to eventually go national, but its next market will be on the East Coast for logistical reasons.

About 70% of the chain’s menu consists of vegetables, but the concept stands apart from the plethora of salad chains because Dig Inn specializes in cooked vegetables. “People are getting more comfortable with the idea that meat doesn’t need to be at the center of the plate,” Eskin says, pointing to trends like Meatless Monday and Michelin chefs launching all or mostly vegetable-based menus.

“There’s a lot more than you can do with Brussels sprouts”—tied with red onions at No. 4 with at 162,550 pounds—“relative to how people used to think about it way back when,” he says. “The level of culinary innovation is making vegetables more mainstream.”

Dig Inn is trying to anticipate the challenges that will come with scaling a concept focused on sustainable and local food. It’s an issue that’s top of mind in the industry as Chipotle last week stopped selling pork in about a third of its U.S. restaurants after discovering that one of its suppliers was not complying with the Mexican food chain’s animal-care standards.

Dig Inn has brought in a sourcing manager who was previously a farmer and is building direct relationships with suppliers from the start rather than going through middlemen. Eskin says that’s unusual for a company of Dig Inn’s size. “We’re doing that at a much earlier stage,” he adds.

Eskin is capitalizing on a shift in consumers who want healthier food that’s better for the environment but still accessibly priced (the average check at Dig Inn is $10). “We think given where the world is headed that we have a more viable product,” Eskin says.

He believes the investment interest stems from the size of the $700 billion restaurant industry, compounded by the level of disruption that’s going on in the sector. “The incumbent folks are either going to go away, shrink, or pivot in some way,” Eskin explains. That’s resulted in growth and funding for Dig Inn and other chains with similar values like Sweetgreen, which landed $18.5 million in funding in November.

In addition to expansion, the latest round of Dig Inn’s funding will also in part go toward exploring food tech, which Eskin says has boomed over the last 18 months. “Food has become the new technology sector,” he notes. Companies like Blue Apron, Sprig, and Munchery are figuring out how to deliver high-quality food to people very quickly, and these ventures changed Eskin’s assumptions that food delivery was strictly a New York City phenomenon. The Dig Inn team is investigating whether it should start its own service or partner with an existing one.

“Restaurants will always be our core business,” Eskin says, “but I think it would be a mistake not to be mindful of how the landscape is changing.”