Apple’s Swift is on fire 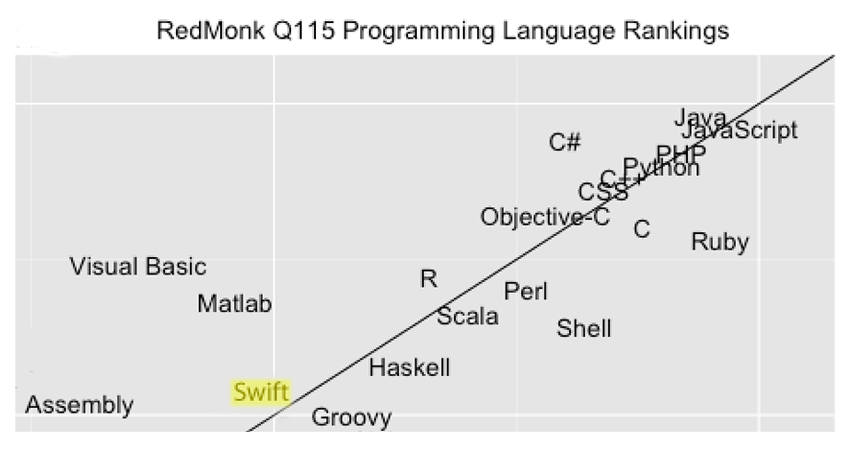 To make the lives of iOS developers easier — and to discourage them from bolting to Google’s Android — Apple in June introduced Swift, describing it grandly as “the first industrial-quality systems programming language that is as expressive and enjoyable as a scripting language.”

It’s designed to scale,” Apple promised, hitting all the buzzwords, “from ‘hello, world’ to an entire operating system.”

Pretty well, judging from the latest rankings from Red Monk’s Stephen O’Grady, who predicted last summer that Swift was going to be “a lot more popular, and very soon.”

Even so,” O’Grady wrote Thursday, “the growth that Swift experienced is essentially unprecedented in the history of these rankings. When we see dramatic growth from a language it typically has jumped somewhere between 5 and 10 spots, and the closer the language gets to the Top 20 or within it, the more difficult growth is to come by. And yet Swift has gone from our 68th ranked language during Q3 to number 22 this quarter, a jump of 46 spots. From its position far down on the board, Swift now finds itself one spot behind Coffeescript and just ahead of Lua. As the plot suggests, Swift’s growth is more obvious on StackOverflow than GitHub, where the most active Swift repositories are either educational or infrastructure in nature, but even so the growth has been remarkable. Given this dramatic ascension, it seems reasonable to expect that the Q3 rankings this year will see Swift as a Top 20 language.

Learn more of the latest news about Apple from Fortune’s video team: