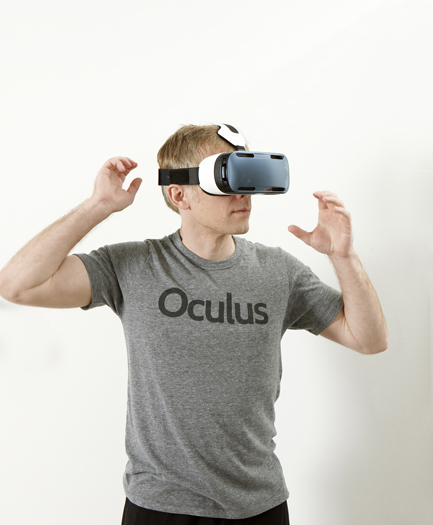 The following article is an extended version of a story that originally appeared in the January 2015 issue of Fortune. For the shorter version that appeared in the magazine, click here.

It’s been a banner year for Oculus VR thanks to Facebook’s (FB) $2 billion acquisition of the virtual-reality company. Chief technology officer John Carmack, best known for programming the iconic video games Doom and Quake, joined just in time for the rush. We spoke to him about what’s next for the immersive technology.

What separates virtual-reality technology today from VR in the past?

In the past there were smaller niche companies, research companies, or military projects, and none of them got it right. Everybody was doing small incremental improvements on the previous formfactor and design, which just wasn’t right. And they didn’t notice that you can make it something that the mass market could enjoy. Oculus really started popularizing a new approach using cellphone screen technology, a wide field of view, and super-low-latency sensor tracking. It’s not crappy stuff that doesn’t work and makes everybody sick. When you experience Oculus technology, it’s like getting religion on contact. People that try it walk out a believer.

What excites you about mobile VR?

The magic of a completely portable and wireless VR headset is easy to under-estimate until you have experienced it. We don’t have the raw horsepower of a high-end gaming PC yet, but there are valuable compensations that make it a very interesting trade-off. And many developers will thrive on the platform, especially as it improves at the rapid pace of the mobile ecosystem.

At its very core, virtual reality is about being freed from the limitations of actual reality. Carrying your virtual reality with you, and being able to jump into it whenever and wherever you want, qualitatively changes the experience for the better. Experiencing mobile VR is like when you first tried a decent desktop VR experience. There is a sense that you are glimpsing something from the future. This is science fiction made real, and it’s only just the beginning.

What has surprised you about the types of VR games developers are making?

Everybody just assumed that first-person shooters were going to be the big thing in VR because [Doom 3 BFG Edition] was the initial demo. But very quickly Oculus learned about the issues with simulator sickness. Comfortable VR experiences had to be these seated cockpit games and you’re diverging from that at your own risk. The great games are the space sims and driving sims and these experiences where you’re basically sitting at a table with nothing happening in front of you. A lot of interesting things are evolving there. There are great games that can be made.

One of the fun things about mobile VR is that without cables tethering you to your PC, you are completely free to sit in a swivel chair and turn around every direction. You can have these navigating experiences where you’re walking around areas. As long as you’re turning in real life and only going forward, VR works as a comfortable experience. It’s still not as comfortable as not moving at all, but it works and you can do it for long periods of time. But the entire development community has migrated away from that because of best practices on the PC. So I am excited to see some people migrate back to that and make some of the exploratory VR things that are very much designed to be played in mobile where you have the freedom to rotate around in the real world.

What are the nonentertainment opportunities you see in virtual reality?

The stereoscopic panoramic videos that we’re showing on Samsung VR are getting a lot of positive traction. It’s exciting when you see creative types—whether from the music, film, or video industries—look at this stuff. The gears are turning in their head almost immediately about how they can use it as a new medium. Part of it is that built-in game-engine technology for the position tracking. But there is also the interesting push for building panoramic content and even augmenting existing content. One of the big things that DreamWorks showed at the Samsung event [in Berlin, Germany] was a traditional movie playing on a screen, which normally would be boring. But they had this animated game engine going on around it, so you had this environment where the characters from the animated movie are waving at you or responding to what’s going on in the movie. That’s another really interesting way that you could have game technology merging with traditional media.

How do you see mobile VR becoming part of people’s lives?

We can’t really say how people are going to wind up using mobile VR. The experience we have so far with people sitting at their PCs and playing games requires a very conscious action to set aside some time to do that. Mobile VR should be much like mobile [devices] in that case, where you can carry it around with you with a tablet and, at some random time when you have some time to kill, you can jump into VR. In fact, that’s what I was doing [in Berlin] at the Samsung event. I was sitting in the “ready” room. I thought, “Well, I have the VR headset here. I’m just going to sit here and play it for a while.” It was filling the time, which is the niche that a tablet or mobile device would have—but with the VR experience.

What are the challenges that remain for mobile VR?

The only significant issue we’re facing right now with mobile devices is not peak hours, but how long they can sustain VR running at large fractions of that power. While we will continue to need mobile systems that get faster and faster with more and more cores and wider and wider GPUs. It’s fine right now if you want the short 15-minute experiences that offer a lot of interesting stuff. But looking ahead, we want people to be in VR for hours at a time. There are some significant challenges that we have to face there.

What impact will Samsung’s entry into VR have on the industry?

One of the things that makes me most excited about the mobile deal and partnership with Samsung [In September, the companies announced the jointly-developed Samsung Gear VR —Ed.] is the pace of advancement that goes on in this space. It forces Oculus to work very hard to schedule these multiple-time hardware releases, so the pressure of the mobile ecosystem is a really great thing. The power of these mobile systems is really impressive when you look at the spec sheet on paper, but one thing that I did not have a good appreciation of a year ago was how important the power and thermal issues are with 2.5 GHz processors and really fast GPUs.