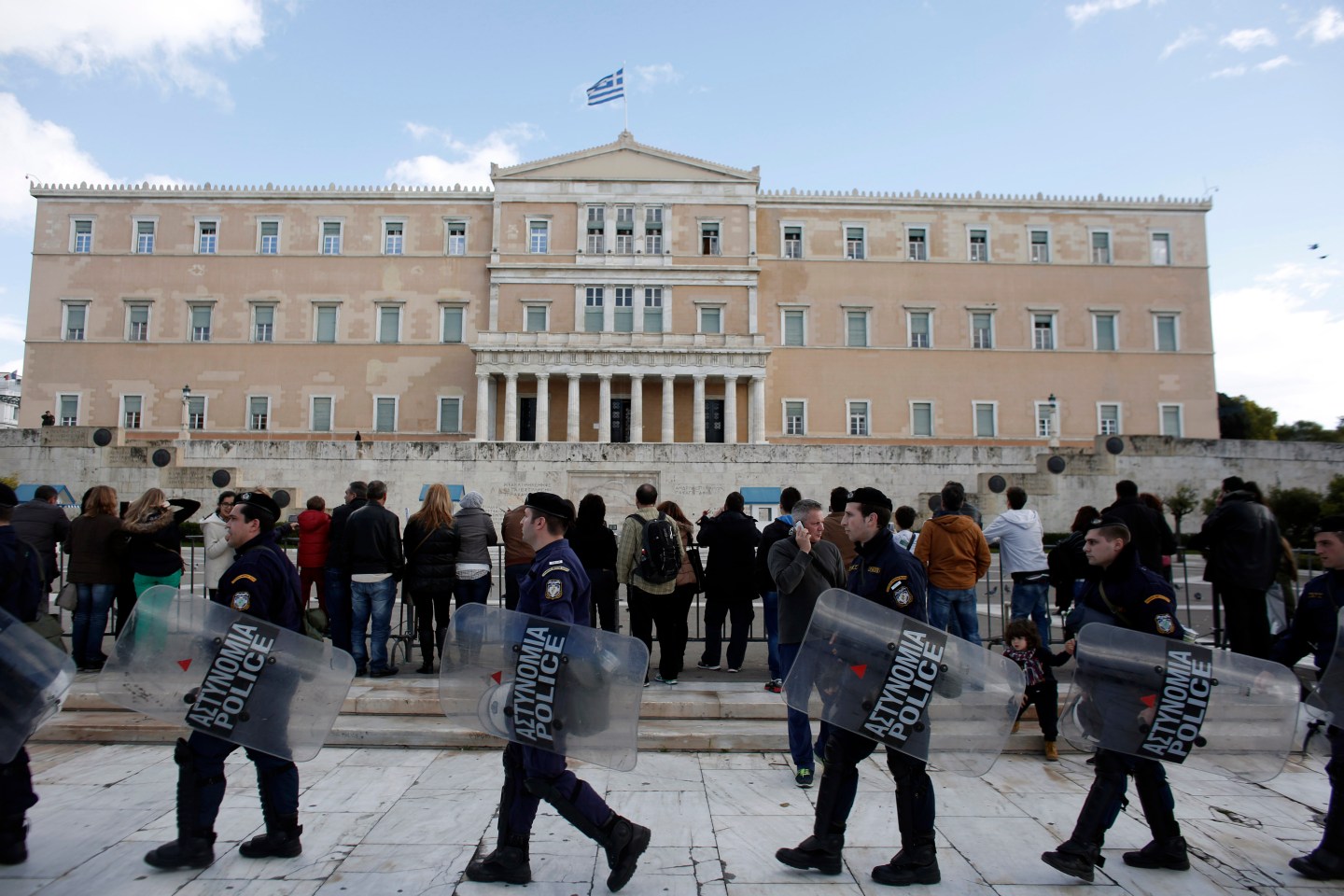 Riot police carry shields past tourists outside the parliament following a final vote by lawmakers for a new Greek president in Athens, Greece, on Monday, Dec. 29, 2014. Greece faces snap elections next month after Prime Minister Antonis Samaras failed in his third and final attempt to persuade parliament to back his candidate for head of state. Photographer: Kostas Tsironis/Bloomberg
Photograph by Kostas Tsironis — Bloomberg

Happy Monday. Hopefully all of you working today are well rested and had an enjoyable holiday week. The U.S. markets continued their strong run last week, hitting new record highs on Friday, but will the situation in Europe affect their ability to continue the crazy rally? Europe’s markets are mostly lower after the Greek presidential election failed, setting up a snap election. And oil prices are starting to creep up again due to a conflict in the oil-producing country of Libya.

Today’s must-read story is by Fortune’s Michal Lev-Ram on how Bob Iger turned Disney into a tech company.

Greek politicians failed to elect a president today, meaning that a general election will have to be held next month. Greek stocks tanked on the news, with fears that if an anti-austerity candidate were to win, the country’s international bailout could come into question. Fortune’s Geoffrey Smith lays out the situation nicely here.

German insurer Allianz said on Monday it was the lead re-insurer to the AirAsia jet missing off the Indonesian coast with 162 people on board, making it the third major airline accident it has been involved in this year. The German company, which has Malaysia Airlines as a client, was the main reinsurer to flight MH370 that disappeared over the Indian Ocean in March, as well as to flight MH17 which was shot down in July while flying over Ukraine. For a bit of background, check out this Fortune feature from earlier this year about airplane reinsurance.

4. The Interview made decent money

Bad reviews be damned, because people want their Rogen. The controversial movie “The Interview” made around $2.8 million in its limited theatrical release Christmas weekend. More importantly, the film brought in more than $15 million through its online release as of Saturday, according to NBC News.
[fortune-brightcove videoid=3961516911001]

5. You can play PlayStation online again

Days after a cyber attack crippled both it and Microsoft’s (MSFT) XBox Live, the PlayStation network is finally getting up and running again. Hacking group “The Lizard Squad” has claimed responsibility for the attack, but the attack is not thought to be related to the one against Sony (SNE) that was related to the movie “The Interview.”