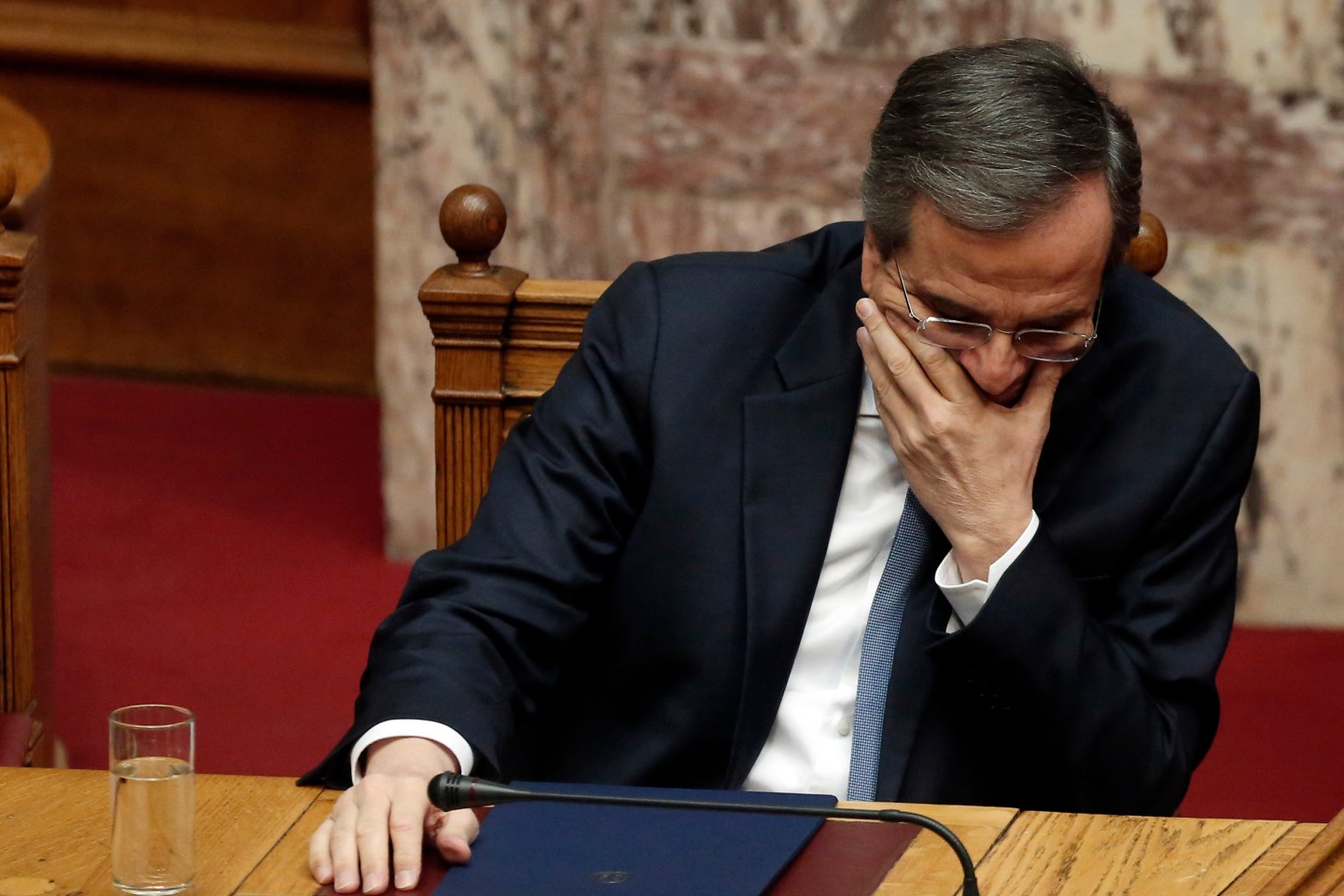 Antonis Samaras, Greece's prime minister, pauses while attending parliament during the final vote for a new president in Athens, Greece, on Monday, Dec. 29, 2014. Greece faces snap elections next month after Samaras failed in his third and final attempt to persuade parliament to back his candidate for head of state. Photographer: Kostas Tsironis/Bloomberg via Getty Images
Photograph by Kostas Tsironis — Bloomberg via Getty Images

After five years looking into the abyss, Greece is on the verge of taking a big step forward.

In a third and final vote, the debt-laden country’s parliament refused to elect a new president, triggering snap elections that may bring to power the radical left-wing Syriza party, which has threatened to default if Greece’s creditors don’t forgive it at least some of its huge debts.

A Syriza victory would make sovereign default, which has been taboo all through the Eurozone’s debt crisis, a very real risk again. The party argues that Greece can never recover unless it gets at least some debt forgiveness, something which neither the Eurozone nor the International Monetary Fund are inclined to give.

Default, which Syriza leader Alexis Tsipras has threatened if he doesn’t get his way, would likely lead to Greece exiting the Eurozone, shaking confidence in the currency union’s ability to survive. Recession in Europe and a new wave of volatility in global financial markets would be assured.

It may never happen. Although Syriza came out top in May when Greece voted in this year’s elections to the European Parliament, its lead over the ruling coalition has been narrowing in recent weeks. Two opinion polls at the weekend put its lead over Prime Minister Antonis Samaras’ center-right New Democracy party at 1.7% and 3.3%, down from over 5% a month ago. Samaras Monday said the new elections would take place Jan. 25.

Local media reports suggest that, while Samaras’ government is deeply unpopular because of the cuts in public spending it has made at the order of the foreign creditors, the country has little appetite for a radical new experiment just as it appears to be exiting recession after five long years (gross domestic product grew 0.7% in the third quarter and was 1.6% higher than a year ago).

A weekend poll showed around 60% of Greeks were against early elections. Against that background, Samaras has gambled that, even if parliament rejected his candidate for (the largely ceremonial post of) president, voters would punish the opposition rather than him.

“The Greek people understand where this adventure could lead,” Samaras told national TV at the weekend.

If he’s right, then the election could result in a vote of confidence for his unlikely coalition with PASOK, the party that has traditionally dominated the left of Greek politics, but which was shattered by its inept handling of the early stage of the crisis. That coalition currently holds a slim majority of 155 in the 300-seat parliament.

Either way, the signs are that Syriza, which is still polling only around 28%, would struggle to form a government on its own. There is no guarantee that it will find enough allies to build a majority of its own. Nor is there any guarantee that it would follow through on its campaign rhetoric, once faced with the responsibilities of power.

If Tsipras actually does get as far as the negotiating table at Brussels, then the threat of default could still be averted by some concessions on repaying over €200 billion of bailout loans. Throughout the crisis, Eurozone leaders have shown just enough flexibility to keep the currency union together, and with Greece now posting a budget surplus before interest payments, the Eurozone can afford some relief dressed up as a reward for good behavior.

The trouble for Tsipras is that the clubby circle of mainstream politicians that head the Eurozone would far rather reward Samaras, one of their own and a man who has finally dragged Greece along the path of reform, than some upstart firebrand who wants to play by different rules. A victory for Syriza would be the first clear embrace of a radical left-wing agenda by a Eurozone country in response to its problems, the first democratic mandate for a government to use default to escape its debts.

The redoubtable German finance minister Wolfgang Schaeuble, who has faced down enough similar threats from bankrupt countries in the last five years, told the newspaper Bild am Sonntag at the weekend that “If Greece chooses a different path, things will get difficult…Every new government has to keep the agreements made by its predecessors.”

Financial market reaction suggested that investors see the news as a major negative for Greece but only moderately bad news for the rest of the Eurozone. The Athens stock market plunged 11.8% on the news but recovered by early afternoon to be down “only” 6.9%, while the yield on Greece’s three-year bonds, which would be worst hit by a tactical default, soared by over 1.2 percentage points to 11.78%.

Three years ago, bad news from any one of the Eurozone’s weak, “peripheral” economies would affect the bonds of all the others. However, the impact Monday was far more muted, a sign that markets still largely trust the European Central Bank’s promise to do “everything it takes” to keep the Eurozone together. The yield on Italy’s benchmark 10-year bond was up only 5 basis points at 2.00%, while Portugal’s rose 4 basis points to 2.75%. A basis point is one-hundredth of a percentage point.