These 7 banks won big on IPOs this year 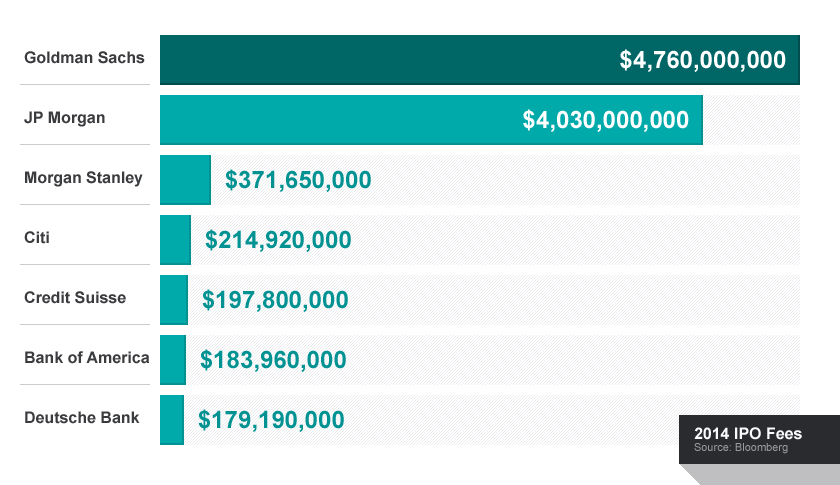 2014 was a stellar year for initial public offerings across the globe.

This year, 1,155 companies started trading on the world’s public markets and pulled in over $238 billion. Based on total proceeds, that makes 2014 the best year for IPOs since 2010, and we haven’t even rung in the new year yet.

With figures this big, there are a lot of gains to spread around. Goldman Sachs (GS) had the best year, grabbing 109 deals worldwide and netting $4.76 billion in fees as of mid-December, according to Bloomberg data. JPMorgan Chase came in second with $4.03 billion in fees across 113 deals. Morgan Stanley (MS) was a distant third, pulling in almost $372 million.

Investment banks earn fees from underwriting IPOs, and the amount they earn is a set percentage of the total money raised by the newly public company. The bank’s cut typically ranges between 3% and 5.5% for big U.S. IPOs, although banks will often lower that percentage if they want to get involved in a prestigious deal. For example, underwriters on the record-breaking Alibaba deal agreed to a 1% cut of the proceeds. Lower fees are often worth it in order to build a relationship with a company and position the bank for future business, such as an upcoming debt issuance or other top shelf IPOs.

Also, IPO fees don’t capture the whole revenue picture. Banks usually take home much more than their fee totals, notching even more gains after the shares list on the stock exchange. Stocks of hot companies often see their prices pop in first day trading, rising above the offering price, and so banks can sell a chunk of the company’s shares for an immediate gain.

All of this has helped to boost investment banks’ bottom lines in 2014. Citigroup’s (C) income from underwriting offerings rose 51% year-over-year in the third quarter, while JPMorgan’s underwriting income was up 24% over the same period. The revenue jump helped both banks boost overall income, which was up 9% at Citigroup and 5% at JPMorgan compared with the year prior.

The banks weren’t the only big IPO winners this year, especially where Alibaba comes into play. Yahoo (YHOO) has Alibaba to thank for a nearly $9.4 billion windfall, and Softbank Chairman Masayoshi Son skyrocketed to the top of the Japan’s richest moguls list after the Chinese internet giant went public.