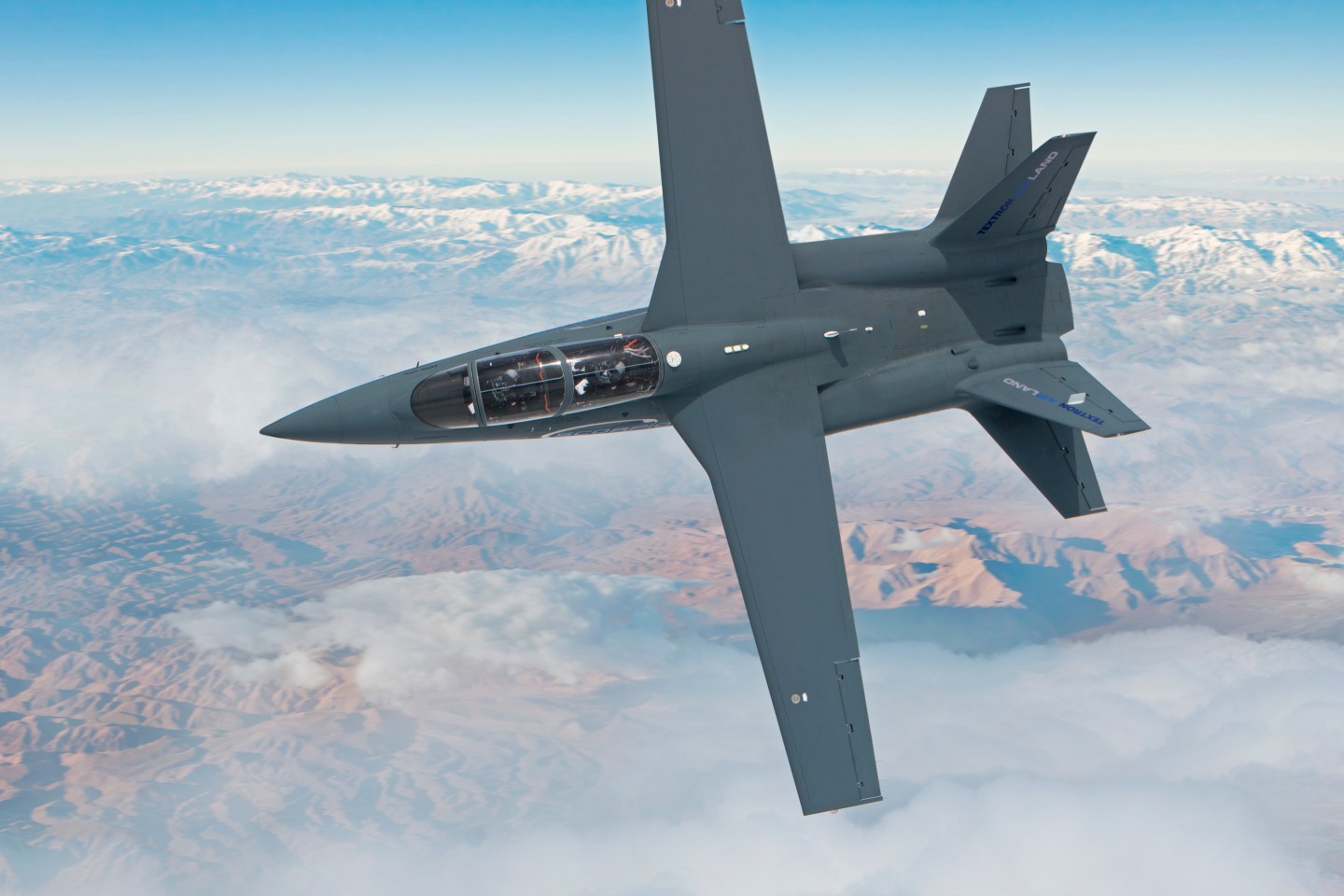 Like spaceships and sports stadiums, military strike jets typically aren’t the kind of things that companies build—much less sell—off the shelf. Take the Pentagon’s new F-35, for instance: Two decades and $400 billion in the making, the F-35 had nine committed customers lined up to buy thousands of aircraft (at between $80 million and $110 million per copy) before Lockheed Martin (LMT) ever started bending metal in earnest. Rarely does a contractor fully develop a military jet on spec.

So when Rhode Island-based Textron (TXT) and its partner AirLand Enterprises unveiled an off-the-shelf strike and reconnaissance jet late last year, no one was certain the idea would fly. The Scorpion—a low-cost, two-seat, twin-engine, subsonic jet built largely from commercially available parts—is designed for intelligence, surveillance, and reconnaissance (ISR for short) as well as light strike missions. It’s not quite a fighter jet and it’s certainly not an ISR drone, but it packs the pared-down capabilities of both. Designed and developed in secret over just two years, the Scorpion defies the general expectations of what a military jet should be—expensive, super-capable, and years in the making. The $20 million Scorpion is inexpensive to buy and operate and just capable enough to be effective.

With global military spending tightening and violent insurgency on the rise in a number of developing or cash-strapped nations, Textron AirLand is rumored to be on the brink of inking its first deals to supply Scorpions to a number of foreign militaries, including to several in the Middle East, Southeast Asia, and restive Nigeria, where fundamentalist Boko Haram militants continue to terrorize that country’s northeast section. Global events giving rise to groups such as the Islamic State of Iraq and Syria, Boko Haram, and others could drive sales of affordable, easy-to-deploy, modern air power. And they might just signal a new way of looking at air power in an era of insurgency and austerity.

“In the future what’s going to be more valuable: one fifth-generation aircraft or 10 that can still get the job done?” says Michael Blades, a senior industry analyst at Frost & Sullivan. (“Fifth-generation” denotes the most recent generation of radar-evading “stealth” fighters such as the U.S. F-22 and F-35.) “That’s the idea, and that’s what Textron was thinking. Defense budgets are tightening and the days of freewheeling spending, of putting your country into debt, are a thing of the past.”

That reality is forcing countries around the world to reconsider their military spending priorities. Textron AirLand CEO Bill Anderson say 22 countries outside of the U.S. have expressed real interest in what the Scorpion offers. Though Anderson won’t name them, the aerospace rumor mill indicates the company has engaged in at least initial discussions with Indonesia, the Philippines, Bahrain, Brunei, Malaysia, Qatar, and Saudi Arabia—suggesting that it’s not just cash-strapped militaries that are taking an interest. To wit, the United Arab Emirates—a key ally in the U.S. campaign against both the Islamic State and Iranian regional influence—has publicly emerged as one potential launch customer.

But the most vocal and interesting launch customer is Nigeria, a country that hasn’t even bothered to conceal its interest in obtaining the Scorpion to assist in its ongoing fight against Boko Haram. “We are really handicapped in attacking the enemy where we want,” Air Vice Marshal R.A. Ojuawo, the director of operations for the Nigerian Air Force, said at an international defense confab last month. “We want this, we need this,” he said, specifically referring to the Scorpion. (The Nigerian Air Force has yet to make a formal request to purchase the aircraft.)

If even one country ordered a squadron’s worth of Scorpion jets from Textron Airland, it would be a significant step forward for a program that for now is stuck in prototype mode. Textron developed Scorpion for an undisclosed sum, part of which was put forward by AirLand Enterprises, a consortium of investors and several former defense officials who all believe that there’s a gap in the military aircraft market.

That gap exists somewhere between the turboprop aircraft that gather ISR cheaply (and the drones that do so expensively) and the fourth- and fifth-generation fighters that conduct strike missions. Turboprops have no dash speed, argues Textron AirLand CEO Bill Anderson, and drones are expensive to buy and operate and are often blocked by international regulations prohibiting the transfer of weapons technology. Fourth- and fifth-generation fighter jets generally start at $50 million per aircraft and can cost $18,000 or more per hour to operate. Factor in maintenance and the life-cycle cost of such fighters—which are often overkill for ISR or strike missions in low-threat environments—puts them out of reach for many militaries.

Scorpion offers low-budget militaries that need ISR and strike capabilities a brand-new jet aircraft for less than half the price of a modern fighter jet with, Textron AirLand claims, a substantially lower operating cost of just $3,000 per flight hour. And, critically, foreign governments can actually buy them. “Obviously we follow U.S. and international regulations,” Anderson says. “But we designed this aircraft to be ITAR [International Traffic in Arms Regulations] free.”

Textron AirLand has managed to do this by tapping Textron’s expertise and supply chain in commercial aviation—Textron owns and builds Cessna, Beechcraft, and Hawker aircraft for the civilian world—to build the Scorpion from mostly commercially available components, including the twin turbofan engines supplied by Honeywell (HON). That keeps costs down and situates the Scorpion on the lax side of technology export bans.

All of this makes the Scorpion an attractive aircraft for militaries that either can’t afford or can’t purchase other kinds of air power. “No doubt you need your fourth- and fifth-generation fighters,” Anderson says. “But when you want long loiter times, you want the ability to find a target and drop a munition on top of its head. In a low-threat environment it’s the perfect aircraft.”

Not everyone agrees. “It’s just sort of a baffling product,” says Richard Aboulafia, vice president for analysis at Teal Group, and aerospace and defense consultancy based in Fairfax, Va. “It’s the perfect solution to a problem that doesn’t exist.”

Aboulafia says less-expensive turboprop aircraft have proven themselves more than capable of conducting ISR and striking ground targets. The Scorpion’s relatively low, subsonic speed and lack of sophisticated radar put it a class below the lowest-end fighter jets capable of air-to-air intercept and combat, he adds. “I’m not sure where the demand would come from,” he says.

Nonetheless, Textron AirLand is confident the Scorpion will sell. If it does it could be an indicator of a military jet market that’s undergoing something of a change in philosophy both among militaries and among companies in the defense business. Textron AirLand likely only needs a few customers to recoup its development costs, says Frost & Sullivan’s Blades. And if it finds real traction with militaries that don’t require all the bells and whistles of a cutting-edge, fifth-generation fighter jet or the latest in drone technology, it won’t only be a boon for Textron. It could change the way many countries think about buying air power, not to mention the way defense technology companies think about developing it.

“I think your going to see more of this,” says Frost & Sullivan’s Blades. “Funding is going down. A lot of the stuff that gets cut is R&D. I’m not saying Textron is necessarily going to have a huge winner here, it’s a niche. But companies are having to go out on their own and try to find that next thing or they’re going get left in the dust.”

Clarification, December 18, 2014: Although most of the Scorpion’s components are commercially available aviation parts that are not generally subject to ITAR restrictions, the complete Scorpion ISR/strike jet remains under ITAR control. Certain of its components may require special export license, depending on their destination country, and the aircraft still requires a State Department license for export to any foreign country.