A new twist in the war over online content recommendations 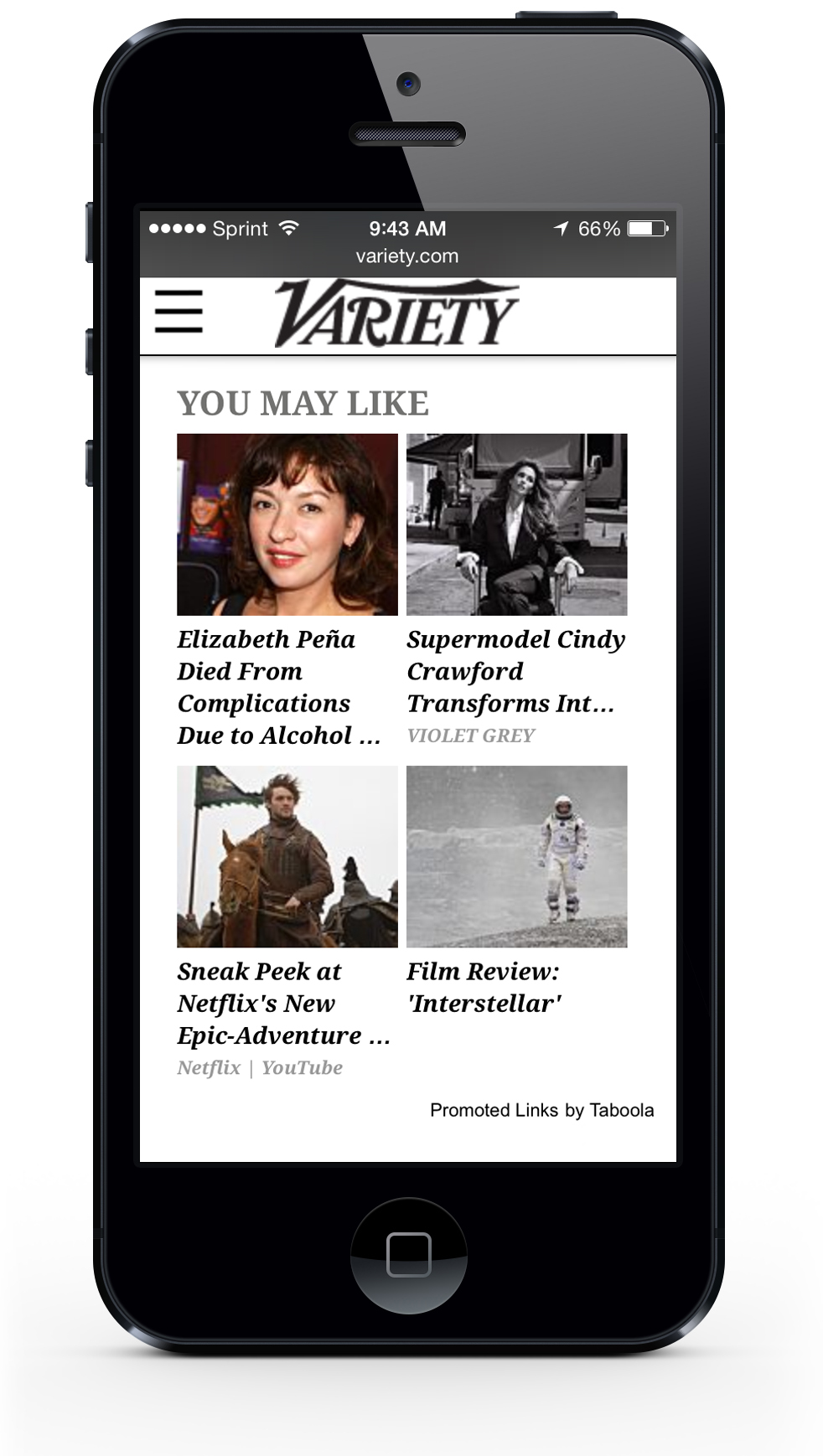 A Taboola module on the mobile website for the entertainment magazine Variety.
Courtesy of Taboola

Online, articles and videos and everything else vie for your limited attention—making the recommendation an important tool for publishers to cut through the noise. Five years ago, a new crop of Internet startups appeared, using algorithms to recommend relevant content on behalf of web publishers. Today, content recommendations is an industry in its own right.

Just about every major web publisher buys and sells traffic through “recommendation” widgets that run beside the articles they publish. In some cases, it’s a way for publishers to further distribute their articles and videos. In others, it’s a way for them to monetize their distribution of someone else’s.

The industry is led by two well-funded New York startups, Outbrain and Taboola, that are each on track to bring in an estimated $200 million in sales this year. Their rivalry has intensified in recent months. In August, the CEO of Outbrain offered some choice words to his competitor in these pages. Dozens of smaller players have also entered the fray: Adblade, Zemanta, Zergnet.

The buzz around the category has captured the interest of big Internet companies. Earlier this year Yahoo (YHOO) launched its own content syndication competitor, Yahoo Recommends. The company’s product is already used by media companies old and new including Hearst, CBS Interactive, and Vox Media. Rumors have since surfaced that Google (GOOG) also plans to launch its own content recommendation service.

Last week, one of the larger competitors in the category, nRelate, suddenly announced it would shut down at the end of the year. It came as a surprise—the InterActiveCorp (IACI) property appeared to be a success, having cornered about one quarter of the market, according to the data analytics company Datanyze. (The company served more than 10,000 websites.) On its heels? Outbrain, followed by Taboola. A dozen smaller competitors fill out the remaining 40%.

There are clues. nRelate’s market share drops significantly as you move closer to the top of the list of the Web’s largest sites—meaning the biggest sites, which are most likely to spend the most money on recommendations, were choosing Outbrain and Taboola over nRelate. “It’s my guess that very few ad dollars are being spent on anything below a 100,000 Alexa rank,” says Sam Laber, director of marketing at Datanyze, referring to the ranking of the largest websites by traffic by Alexa, an Amazon-owned web analytics company.

With one competitor out of the way, Outbrain and Taboola continue to battle for dominance. They have both raised lots of venture money—$99 million for Outbrain, $40 million for Taboola. Eventually they’ll need an exit strategy. Either the startups sell to a large public tech company like Yahoo or Google—which again, are both working on their own versions of the concept—or they go public themselves, leaving Yahoo and Google as threats.

It is telling that, in recent months, Outbrain and Taboola have engaged in a land grab to secure large, multi-year contracts with publishers. For example, Outbrain announced an exclusive deal worth $100 million over three years with Time Inc. (TIME), which publishes Fortune. The deal clearly demonstrates Outbrain’s desire to lock in publishers as customers before Google can snatch them away. That way, when Google decides to formally launch its own content recommendation engine, it will find all of its potential customers locked into multi-year contracts, leaving it and Yahoo with two paths from which to choose: acquire your way in, or retreat.