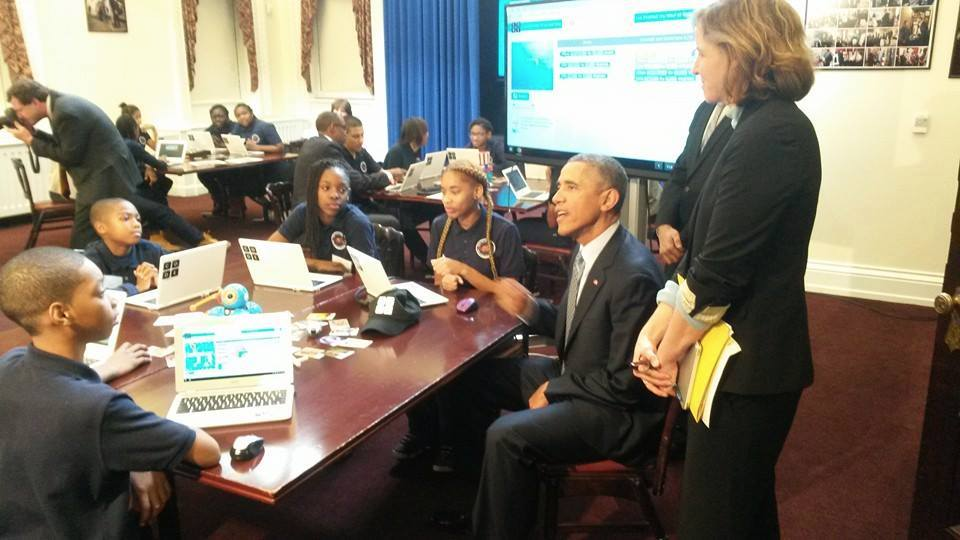 If you happened to stop by an Apple store Thursday evening, you probably saw clusters of kids hunched over iPads. It’s not an usual sight at Apple’s 447 retail locations, but this time around they weren’t just playing with apps—they were creating their own.

The hour-long, free tutorials offered at Apple stores around the world were part of this week’s “Hour of Code,” a nationwide campaign to get more young people—especially girls and minorities that are underrepresented in STEM education—interested in computer science.

The campaign kicked off last year, and is the brainchild of a non-profit called Code.org. Through the founders’ connections (co-founder Hadi Partovi is an entrepreneur and early investor in the likes of Facebook (FB), Dropbox and Zappos) the organization has managed to attract corporate partners like Apple and Google (GOOG), both of which hosted tutorials this week. It has also gotten celebrities like Jessica Alba and Ashton Kutcher to participate in video chats with classrooms across the country. Even President Barack Obama was roped in, kicking off the week at the White House, where he wrote a line of code himself.

“Part of what we’re realizing is that we’re starting too late when it comes to making sure that our young people are familiar with not just how to play a video game, but how to create a video game,” President Obama said at the event.

The dearth of women in computer science is nothing new. But here’s a quick refresher: According to the National Center for Women in Information Technology, although women hold 57% of all professional occupations in the U.S. workforce, they only hold 26% of computing occupations. At the same time, computing-related jobs are expected to be the fifth-fastest growing segment of the professional workforce through 2022. What’s more, computing has the second-highest median annual wage of all job categories.

Getting more girls to code isn’t as simple as slapping a pink background onto an app. It may not sound politically correct, but it turns out many female students want to build different kinds of apps than boys do.

“We recognized that shooting robots aren’t always the most appealing thing for girls,” says Jocelyn Leavitt, co-founder and CEO of Hopscotch, an app that teaches kids to code (Leavitt spoke at the “Hour of Code” event at Apple’s store in SoHo). “Hopscotch tries to be appealing to girls as well as boys. It’s totally open-ended, they can make whatever they want, so you’ll also see fashion show games.”

About 59 million students have tried Code.org’s “Hour of Code” (while this celebratory week is packed with publicity and high-profile events, the campaign is actually year-round). According to the organization, 41% of the students who have tried the online courses are girls. In high school classrooms across the country, 34% are girls (60% are African American or Hispanic).

“We use lots of examples of women’s role models, like Jessica Alba,” says Partovi, co-founder of Code.org. “These are women that are really involved in technology in various ways.”

To reach more girls, Code.org has also partnered with the Walt Disney Co. A couple of weeks ago, they jointly launched an hour-long, online Frozen-themed tutorial that lets kids use computer code to create snowflakes and ice fractals.

“Elsa is an ice princess that has super powers to create anything out of ice,” says Partovi, who is convinced the Frozen app will reach 10 million girls. “Computer programming is also a magical superpower.”

As part of the partnership, Disney has given $100,000 to Code.org. Getting Disney—and more importantly Anna and Elsa (for those who have been in hibernation for the past year and a half, they’re the popular princesses from Frozen)—on board is a major coup for Code.org. So is the tie-up with Apple.

“Those are not the easiest partners in the world to partner with,” says Partovi. “They are some of the most pristine brands in the world, and they’re very choosy about who they partner with.”

Apple in particular has made a bigger push to attract more women in recent months. In October the iPhone-maker announced it would subsidize egg-freezing for female employees. It also recently released a breakdown of employee demographics. While the numbers are pretty dismal—a la the rest of the tech industry—Apple’s top brass, including CEO Tim Cook, has publicly professed their commitment to hiring more women and minorities.

“We are proud to be part of making computer science accessible to students of all ages around the world,” Eddy Cue, Apple’s senior vice president of internet software and services, said in a release announcing Apple’s partnership with Code.org. “Education is part of Apple’s DNA and we believe this is a great way to inspire kids to discover technology.”

Of course, Apple’s participation in this week’s Hour of Code campaign has an added benefit for the company: it brings in traffic to the stores during the prime holiday shopping season. And the more boys and girls that are playing—and coding—with iPads, the better for Apple.