Cadillac is running in circles: Is it a luxury brand or a car company or…? 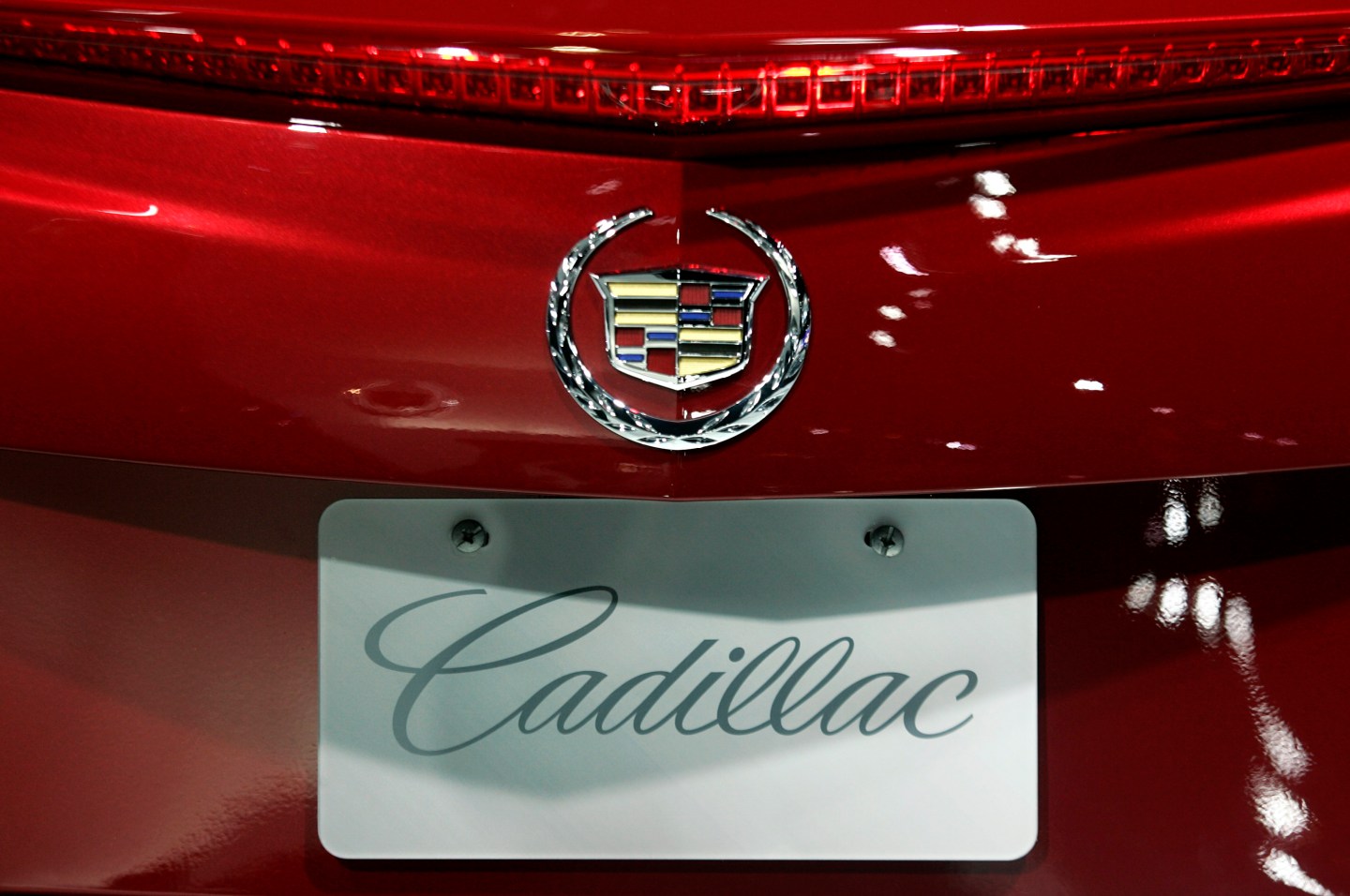 The General Motors Co. (GM) Cadillac logo is displayed on a vehicle during the LA Auto Show in Los Angeles, California, U.S., on Thursday, Nov. 29, 2012. General Motors, which counts China as its largest market based on vehicle sales, plans to add a new Cadillac model annually in China through 2016 as it seeks to boost sales of the luxury brand in the world?s largest auto market. Photographer: Jonathan Alcorn/Bloomberg via Getty Images
Photograph by Jonathan Alcorn — Bloomberg/Getty Images

Cadillac can’t seem to stay out of the news. Sure, P.T. Barnum (and many others) have said, “I don’t care what they say about me, just make sure they spell my name right!” But is all that notoriety a good thing?

In the past six months, Cadillac has taken on an Audi veteran as its boss, moved its headquarters from Detroit to a high-rise in New York City, and revealed a whole new scheme for naming its car models. It is as if someone had decided that frenetic activity would be enough to banish any remaining memories of floaty Fleetwoods and Sedan de Villes, not to mention rebadged Cimarrons and Cateras.

Each of this year’s moves has been portrayed as a necessary step in the long-term growth of GM’s highest-margin car line. But like a football team caught in the midst of rebuilding with a squad of aging veterans and untested rookies, Cadillac is vulnerable. It lacks entries in the fastest-growing segments of the market and its new models have fallen out of favor much more quickly than forecast. In a robust run of new car sales, Cadillac has fallen down 5.9% for the year. Its sales in November fell a painful 18.7%, a performance far worse than its luxury rivals.

Longtime Cadillac loyalists are running out of patience. They fear that the 112-year-old car line has been taken over by outsiders who don’t respect the Cadillac name, its history, and what it stands for. Their worry revives a running argument in automotive circles, to wit: Should car companies be selling the sizzle or the steak?

The published comments of two recently arrived Cadillac executives would appear to confirm suspicions that Cadillac’s new leaders are ignoring the most important rule of the of the car business: It all starts with product. First came remarks by Uwe Ellinghaus, the German-born chief marketing officer who joined Cadillac a year ago. Ellinghaus’ previous jobs included a decade-long stint at BMW and a much shorter one at Montblanc. Interviewed at the Los Angeles Auto Show, he declared, ”My boss and I always say we want to build the first luxury brand that just happens to make cars. That sounds like a joke, but we’re serious about it.”

Just to make himself clear where he stood in the car vs. brand debate, Ellinghaus declared Cadillac wouldn’t be hiring any petrolheads in marketing: “We have more than enough petrolheads, and we will still. I need people with experiences in other industries, but with luxury brands.”

Ellinghaus’ comments didn’t sound like a joke to Peter De Lorenzo, founder of the Autoextremist website and longtime keeper of the GM flame. “Projecting Cadillac as a luxury brand unto itself—one that happens to make cars as some sort of glorified sideline—is nonsensical and a fool’s errand,” he wrote. “That dog just won’t hunt.”

Adding insult to injury were subsequent comments by Cadillac’s Melody Lee, whose title is director of brand and reputation strategy. In an interview published in Fortune as part of its Most Powerful Women coverage, she dissed both Cadillac and Detroit by declaring, “Everyone in New York is always just a little bit ahead of everyone else,” and followed up with “I don’t buy products, I buy brands. We need to show drivers what the Cadillac lifestyle is all about.” The last straw was the article’s headline, “For Cadillac’s brand director, it’s not about the cars.”

Lee’s interview drew the following response by Ronnie Schreiber, editor of Cars in Depth, on the Truth About Cars website: “I think [her comments] don’t bode well for the brand. Automotive history has many examples of fine vehicles that were crippled in the marketplace by the very people trying to market them.”

Both sides in this philosophical dispute would agree that Cadillac needs help. Its newest models, like the ATS midsize sedan and XTS full-size four-door, are designed to match up against similar models from Mercedes-Benz, BMW, and Audi but invariably fall short in head-to-head competition. An effort by Cadillac to boost their perceived value by raising transaction prices by 14% hasn’t paid off. And GM, still shaking off its post-bankruptcy sluggishness, has been slow to provide Cadillac with distinctive products in the market’s fastest-growing segments: compact, midsize, and full-size crossovers. Even the Escalade, Cadillac’s most distinctive vehicle and likely its most profitable, is suffering. Between 2003 and 2007, Cadillac sold nearly 60,000 Escalades every year. So far this year, only about 26,000 have found buyers.

In general, non-traditional marketing schemes don’t work in Detroit. Loyalists have history on their side. They remember GM’s flirtation with brand managers in the 1990s, when outside marketers were recruited to bring their packaged goods expertise to the car business. The idea was to develop an identity for every model of every division. Either the concept was flawed or the pushback from inside the company was too stiff because the experiment failed. Within a few years, all of the outside brand managers had left the company.

Over at Ford, CEO Jac Nasser adopted another marketing trope. Nasser proclaimed that he would transform Ford “from a boring old car maker whose shares achieve a price-earnings ratio of only ten” into “a consumer-products and services company commanding a multiple of more like thirty.” Nasser’s transformation didn’t survive the 2000-2001 recession. Nor did Nasser; he left Ford in October 2001 after less than three years on the job.

But what the car buffs forget is that Cadillac has been investing heavily in new products for more than a decade with only mixed results. In late 2000, GM executives held an informal meeting to discuss Cadillac’s future and agreed on a strategy to recast its product line with more of a European attitude. The 2003 CTS was the first Cadillac to employ the new philosophy. From there came the STS sedan and first-generation SRX crossover. GM spent $4.3 billion on the effort and Cadillac is still trying to catch up.

There is more than one way to capture the premium prices that identify a true luxury brand. Land Rover has done it by producing unique vehicles at an elevated price point that are supported by very little marketing. Porsche has done the same.

Other brands have to work harder. You can’t imagine BMW without remembering its tag line, “The ultimate driving machine.” European travelers may see Mercedes taxi cabs, but their vision of the brand gets recalibrated upon exposure to an aggressive advertising campaign and corporate manifesto, “The best or nothing.”

From the beginning of its reincarnation at the turn of the century, Cadillac has suffered from an inconsistent application of both. For it to truly succeed in achieving the goals it has set for itself, it will need both great cars and great marketing.