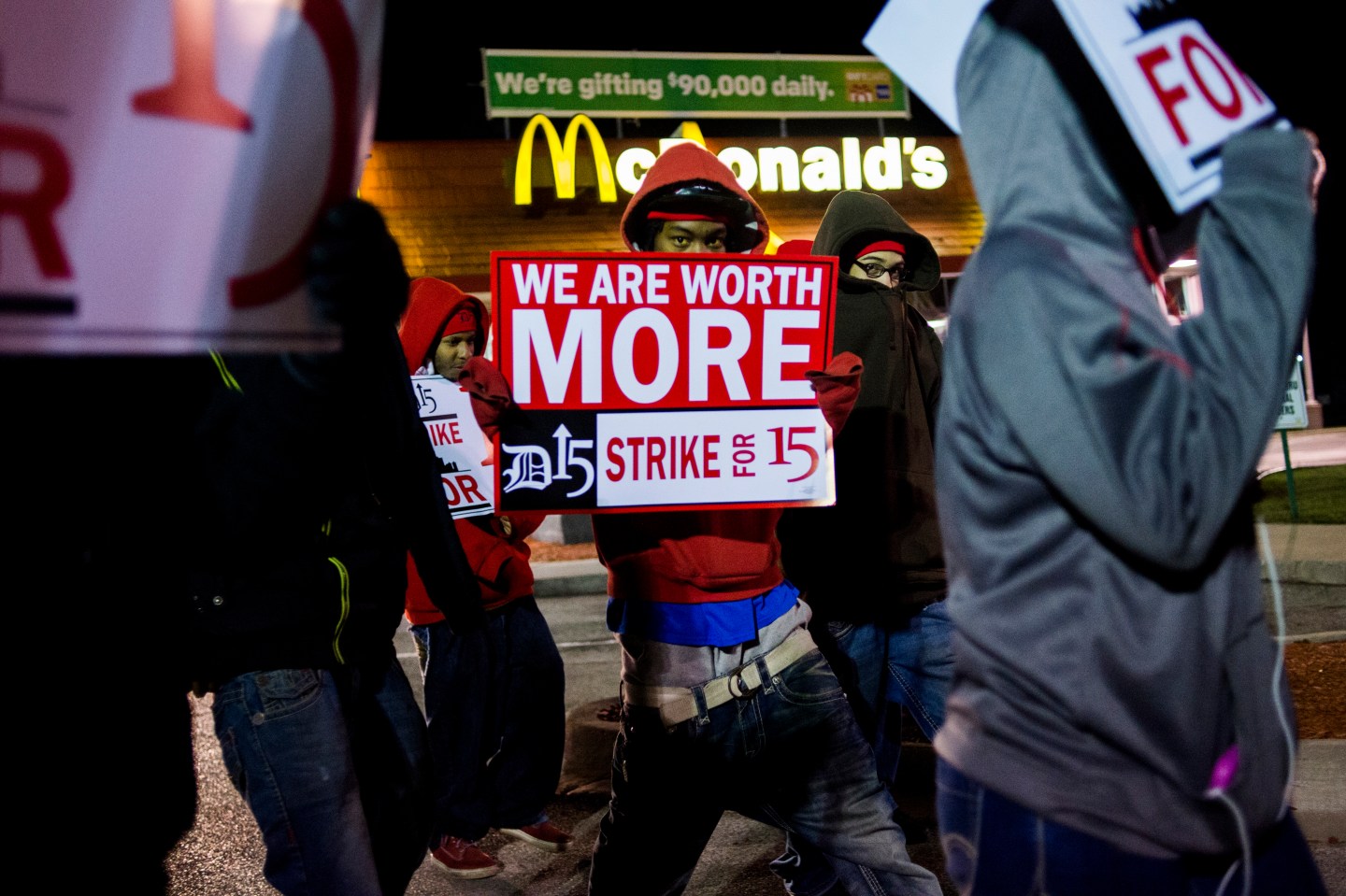 Nathaniel Loyd, 23, center, holds a sign during a demonstration for an increased minimum wage on Thursday, Dec. 4, 2014 at McDonald's in Mt. Morris Township, Mich. Activists, fast-food workers and others are calling for increasing the minimum wage to $15 per hour and allowing workers to form unions without corporate opposition, as part of nationwide demonstrations. (AP Photo/The Flint Journal, Jake May ) LOCAL TELEVISION OUT; LOCAL INTERNET OUT
Photograph by Jake May — MLive.com/AP

Fast food workers in some 190 cities walked off the job on Thursday, seeking the same demand they’ve been making for the past two years: $15 an hour in pay.

It’s been the fast food movement’s rallying cry since November 2012, when 200 workers in New York City first abandoned their registers and food prep stations in protest of employers who rake in billions of dollars in profits while paying what the employees characterize as poverty wages.

The workers settled on that $15 figure—as Kendall Fells, organizing director of Fast Food Forward, tells it—two months before, in a space in downtown Brooklyn made available by a teachers union. Ten dollars an hour was the first suggested demand, but the group of about 80 workers eventually determined that that figure wouldn’t free them from dependence on public assistance. The next number thrown out was $20, but “the majority [of the group] didn’t think $20 was achievable,” Fells says, leaving $15 as the eventual winner.

The group didn’t refer to any statistics or living wage calculators. “It wasn’t some [New York Times] Upshot or 538 analysis,” says Fells, who’s “on loan” from the Service Employees International Union, a group backing the fast food push. “They wanted a wage that would allow them to afford to eat and get a roof over their heads.” (The SEIU did not respond to a request for comment for this article.)

The fast food workers launched their campaign with the $15 per hour demand as their cornerstone, even though in November 2012, that dollar amount seemed like a pie-in-the-sky request, even unreasonable and out-of-touch. At the time, it was higher than any city or state minimum wage in the country and more than double the minimum federal rate.

Though Fells characterizes the $15 demand as an off-the-cuff calculation, asking for so much has proved to be a brilliant strategy.

A wage of $15 per hour is now the battle cry for low-wage workers nationwide, and it’s transformed labor organizing from a process often centered on nickel-and-dime negotiations with a single employer into a social justice movement that transcends industry and geographic boundaries. Not to mention the tangible results: Seattle passed a $15 minimum wage in June. San Francisco’s minimum wage is set to meet that mark in 2018. Los Angeles is considering raising its minimum wage to that figure. And, just this week, Chicago increased its minimum wage into similar territory, passing a law that will hike its minimum pay rate to $13 per hour by 2019.

“It’s changed public policy across the country,” says Steven Ashby, a professor at University of Illinois at Urbana-Champaign’s School of Labor and Employment Relations. Fifteen dollars per hour, he says, doesn’t seem like that huge of a leap anymore.

“If [the fast food workers] had asked for 50 cents more [than they were making], then it becomes a particular ask,” says Tom Juravich, professor of labor studies at University of Massachusetts Amherst. All the attention would have been on that dollar amount, he says. Or if the group had supported President Barack Obama’s $10 per hour proposal, it would have created a storyline—a labor group agreeing with a Democratic president—that’s nothing new.

Instead, by demanding what seemed like a long-shot wage raise, the group—intentionally or not—refocused the conversation on the circumstances that prompted workers to ask for so much, Juravich says. “We used to assume that people who worked in fast food or in a coffee shop were like us—they have homes, cars, kids,” Juravich says. The fast food campaign “showed us that they’re not. They’re really struggling to find adequate housing, safe places to live, and decent food. It pulled people out of the shadows a bit and into the public consciousness.”

Though that strategy has upended many labor organizing norms, it has historical precedent.

Consider the 1934 textile strikes that took place in the southern United States, during which tens of thousands of workers across the industry—frustrated by 55-60 hour weeks that typically yielded as little as $10 in pay—walked off the job and demanded 30-hour work weeks and $20 per week. Several workers were killed and many more injured or jailed during a series of strikes that year, and there were few immediate results. Decades later, however, the movement is credited with aiding the passage of the National Labor Relations Act, which provides workers with organizing protections.

SEIU’s Justice For Janitors campaign in the 1990s, which led to the unionization of custodial workers, is similar to the fast food movement in that it drummed up public support by focusing on social justice themes. It wasn’t cast as “we want a dollar more,” Juravich says. It was about establishing a base line of fairness for a group of workers who were spread across many cities, worked for different employers, but yet experienced similar disenfranchisement.

The $15 demand also gives the fast food movement staying power. “It’s not as though we’ve got [employers] jumping to sign on to this,” Juravich says. It’s not a goal that can be easily or quickly met. “I think that characterizing it this way allowed it to sustain,” he says.