Pot industry is a buzz-kill for banks 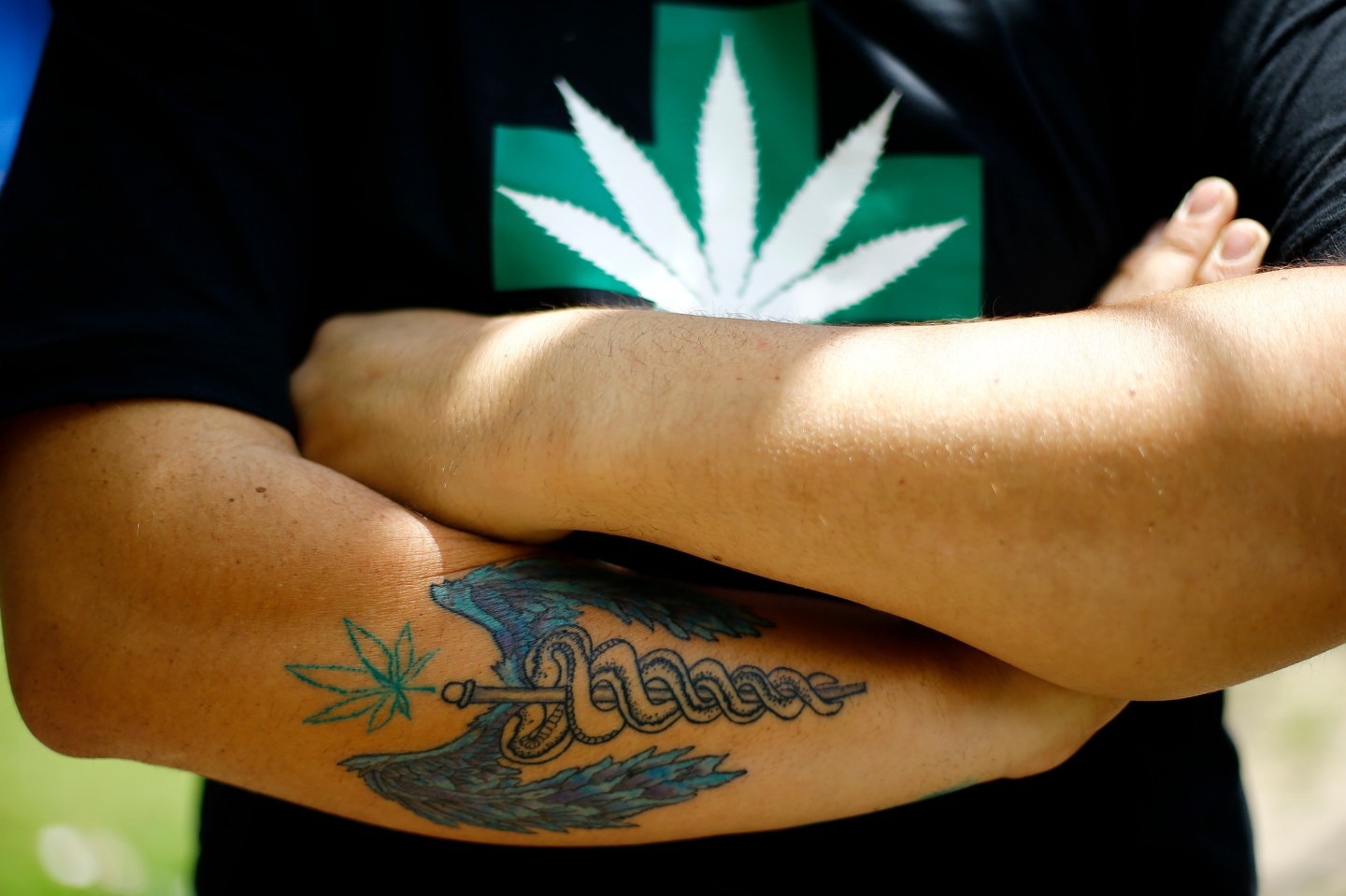 A man wearing a t-shirt with a marijuana leaf and a tattoo featuring a medicine symbol attends the first cultivation of cannabis authorized for medicinal purposes in Chile, Santiago October 29, 2014. The project will benefit about 200 people living with cancer through treatment made with cannabis oil, according organizers. REUTERS/Ivan Alvarado (CHILE - Tags: SOCIETY AGRICULTURE DRUGS) - RTR4C3WF
Photograph by Ivan Alvarado — Reuters

Banks are leery about signing up marijuana dispensary owners as customers. Giving pot store owners checking accounts and credit cards could open the door to a federal investigation.

As a result, the cannabis industry is struggling with how to deal with the mountains of cash it takes in, which at best, is an inconvenience, and at worst is an easy target for robbers. Increasingly, dispensary owners are turning to a burgeoning mini-industry of “ganjapreneurs” who provide store security and payment systems.

“These guys are basically showing up at the tax assessor’s offices with duffel bags of cash to pay their taxes,” George Jage, publisher of Marijuana Business Daily, said in describing one of the odd consequences of being on the banking blacklist.

It’s a growing problem as the cannabis industry emerges from the shadows into semi-legality. Twenty three states and the District of Columbia have legalized medical marijuana, while recreational pot is sanctioned in four states.

The amount of money changing hands is huge. The legal pot market is expected to reach $2.6 billion in sales by the end of the year, and could top $10 billion annually by 2018, according to The ArcView Group, a cannabis-focused investment firm that gathers market research. In Alaska and Oregon, the two states that recently voted to legalize recreational marijuana, first-year sales could reach almost $80 million and $200 million, respectively, ArcView estimates.

Last week, 3,200 people looking for a piece of the burgeoning industry gathered in Las Vegas for the third annual Marijuana Business Conference & Expo, hosted by the publishers of Marijuana Business Daily. Security firms and cash management and payment services were well represented among the business hawking their pot-related services. At least 30 different companies specializing in payments and security showed up.

Among those in attendance were CannaGuard Security, an Oregon company that installs video surveillance and security systems for marijuana growers and retailer in the Northwest. Another company, Cannabis Merchants, says it offers pot retailers credit card payment terminals that allow them to accept Visa and MasterCard.

These are areas of particular importance to cannabis businesses that, to this point, have had to deal mostly in cash because of the federal government’s classification of marijuana as a Schedule 1 drug (the same category as heroin and ecstasy). Large, national banks have shied away from doing business with the marijuana industry — even in states where the drug is legal for medical or recreational purposes — for fear of losing their federal insurance. The situation creates a number of security concerns for companies with large amounts of marijuana and cash on hand — not to mention making it difficult to maintain payroll and pay suppliers.

In July, the House of Representatives voted to prohibit the Treasury Department from penalizing financial institutions that do business with the cannabis industry (the Senate, however, has yet to act). Meanwhile, various federal regulators have issued guidance on how banks can work with marijuana businesses without running afoul of federal laws.

But financial institutions remain skittish. For the most part, Marijuana businesses operating legally under their respective states’ laws still have to operate with large stores of cash.

Tactical Security, an Illinois security company, provides a measure of protection for clients with growing operations and medical dispensaries in its home state. Tactical says it offers security consultations as well as “armed courier/escort teams” for transporting products and cash. Would-be pot vendors applying for permits in Illinois must submit a security plan as part of their paperwork.

There is also Blue Line Protection Group, which also offers security consultation and protection to cannabis companies. Blue Line, which is based in Lakewood, Colo., recently partnered with payment processing company Payteller Finance in a joint venture provides marijuana businesses a mix of security services and access to Payteller’s JaneFour20 digital payment kiosk, which the companies say eliminates the need for cash transactions.

Dispensaries have been known to use payment kiosks to avoid dealing in cash. But a bank providing a number of those machines yanked them from hundreds of marijuana dispensaries in Colorado and Washington last month after balking at their placement in pot stores.

Earlier this year, First Security Bank of Nevada opened up one avenue of banking services for the cannabis industry when CEO John Sullivan announced that the regional bank would do business with dispensaries. Sullivan told CNBC last week that First Security has already opened accounts for roughly 80 cannabis industry clients and accepted about $35 million in deposits.

Derek Peterson, CEO of Terra Tech, a publicly-traded agricultural company that plans to open a handful of dispensaries and cultivation centers in Nevada, is already doing business with the bank. Peterson says Terra Tech has had its share of frustration operating with large amounts of cash, but he admits the problems are at least slightly better now after smaller regional banks like First Security started opening their doors to the cannabis industry.

“It helps us maintain our deposits, it helps us conduct payroll,” Peterson told Fortune recently, although he admits that his company still makes most of its payments in cash.

Still, the nation’s largest banks will likely continue to avoid the cannabis industry until the federal government reclassifies marijuana from its current prohibited status. Adam Bierman, managing partner of cannabis management company MedMen, told Fortune recently that he has had national banks close his accounts because of his connection to the industry.

“They’re not touching cannabis,” he says.

Jage, the Marijuana Business Daily publisher, says much of the focus at his company’s next expo, to be held this spring in Chicago, will be on money. That includes attracting investors to the industry, but also issues related to security and managing large piles of cash.

“It’s the elephant in the room,” Jage says.