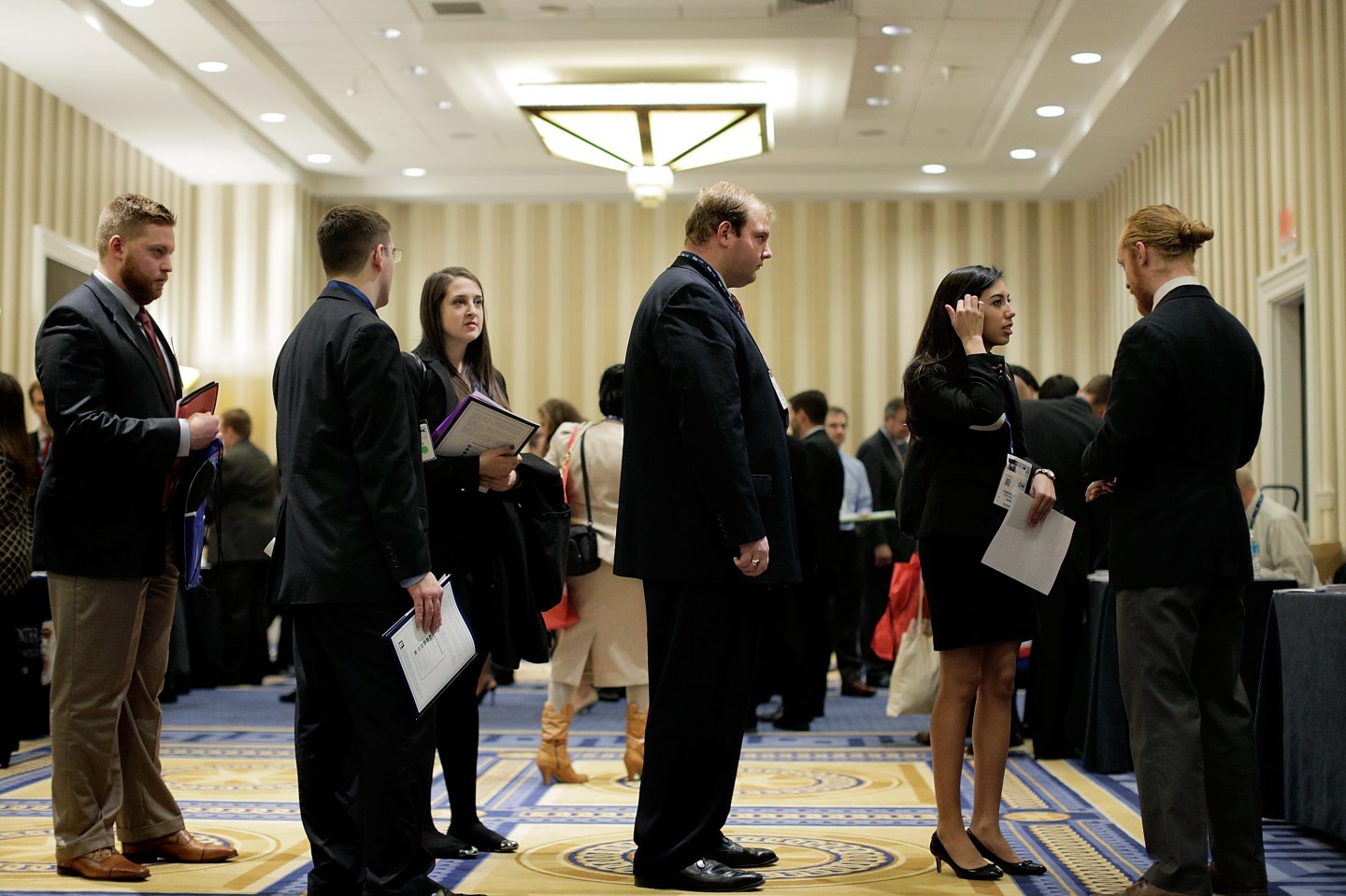 NATIONAL HARBOR, MD - MARCH 08: Attendees wait in line to speak with a prospective employer at a job fair during the 41st annual Conservative Political Action Conference at the Gaylord International Hotel and Conference Center on March 8, 2014 in National Harbor, Maryland. The conference, a project of the American Conservative Union, brings together conservatives polticians, pundits and voters for three days of speeches and workshops. (Photo by T.J. Kirkpatrick/Getty Images)
Photo by T.J. Kirkpatrick — Getty Images

The Labor Department released last month’s employment figures Friday morning, and the report shows that the U.S. labor market has continued to post steady gains while some stubborn weak points still exist. Here are some key points from the October jobs report.

What you need to know: October was the 56th straight month of private-sector job gains in the U.S., and monthly gains have averaged about 227,000 so far this year. The job market has been steadily improving, which is good news. However, on the downside, hourly wages have struggled to make gains and the number of long-term unemployed is still almost 50% higher than it was before the recession hit.


The Federal Reserve, which had continually worried that the labor market is not as healthy as it hoped nearly seven years after the start of the Great Recession, eased up on its view following its meeting last week. The Fed issued this cautiously worded update on its outlook:

“On balance, a range of labor market indicators suggests that underutilization of labor resources is gradually diminishing.”

The big numbers: The U.S. labor market added 214,000 jobs in October, falling shy of economists’ estimates of 235,000 jobs, according to Bloomberg data. The unemployment rate dropped unexpectedly to 5.8% —its lowest level since July 2008 — compared to an anticipated 5.9%. Private employers added 209,000 jobs.

Hourly wages ticked up by 3 cents last month, while the number of long-term unemployed was little changed at 2.9 million.

What you may have missed: October’s gains keep the U.S. labor market on track for its best annual performance since 1999. That year an average 265,000 Americans found jobs every month. The October job additions are slightly shy of the recent three-month average of 224,000 jobs.

The continued growth comes amid global worries of slowing economic growth, although there’s little indication that it has spilled over into the U.S. labor market.

“It all speaks to the story that the U.S. can sustain pretty strong growth even when there are concerns about growth slowing in places like China and the euro zone,” said Jeff Greenberg, a senior economist at JP Morgan Private Bank in New York.

Some of the biggest job gains last month went to the professional and business, and healthcare sectors, which added 37,000 and 25,000 jobs, respectively. Retail hiring has also accelerated as stores geared up for the holiday season ahead, and service-sector employment, which increased by 181,000, is at an all-time high, according to Goldman Sachs economist Kris Dawsey.