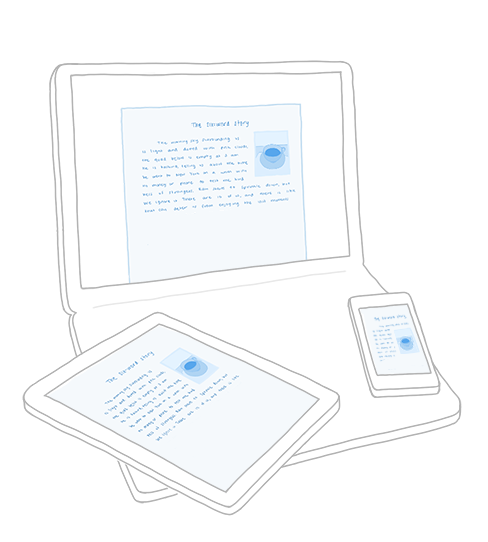 Dropbox is making a serious bid for business customers. The company’s chief operating officer, Dennis Woodside, dropped by Fortune headquarters recently to outline the company’s strategy. Below is an excerpt from that conversation, lightly edited and condensed for clarity.

Fortune: The progression is: build a set of enterprise services, sales staff, and go after business customers. Is that what you’re doing now?

Woodside: Absolutely. We’re starting to do that, yes, although we will take a different approach than some of our competitors. We don’t have a brand awareness problem. In most cases, people have heard of Dropbox. Especially when you get outside of the U.S., the usage is already there. What we have to do is convince them of the value of Dropbox in a business setting and convince them that the enterprise features that we’ve built satisfy their security requirements and their needs.

W: It’s trust; it’s control. Those are the things that most larger companies are concerned about.

F: Do you find that conversation easier to have now that more things start on the consumer side before working their way into business?

W: A little bit, but you’re dealing with information, so that’s always going to be a bit tricky. The company’s done a really good job in the last year of building up and investing a lot in the security of Dropbox itself. Just to give you a couple examples: When you save a Powerpoint presentation to Dropbox, we actually split it up into four-megabyte chunks—fairly small files—and then each file is encoded with a different key. The keys are stored on our servers, and the core data is stored on a different set of servers. So even if you had access to, hacked a specific server and pulled some of the files, you’d need a key to decrypt each chunk and then another to put it all back together. Once the information is on our service, it’s very hard to get access to. The issues that IT administrators are typically concerned about are: What if one of my employees accidentally sends something to someone that they shouldn’t? But you have that issue with e-mail as well.

F: Is there a noticeable difference in security concerns among your customers today versus a year ago?

W: On the business customer side, there’s been heightened interest in security for a long time. Clearly the Edward Snowden revelations have caused people to invest a lot in security and think a lot harder about it at the CEO level. The numerous data breaches at Target and others have caused quite a bit of interest. I think it’s just more that what may have been a CIO issue is now a CEO issue in many companies. Everybody has to be cognizant of the security environment and what are we doing to protect our customers’ information.

W: We’re a growth company; there are always challenges. The team is close to doubling, so that creates a lot of pressure on recruiting. We’ll end the year at about 1,100 people.

F: What is Dropbox going to be in however many years?

W: If you believe that 3 billion people in the planet, for most of them their local hard drive is not the best place to store information. That’s the addressable market, potentially. And okay, let’s say you don’t believe it’s that big—then let’s just look at knowledge workers. There are 600 million of them in the world. Those are big numbers that potentially could use a service like Dropbox.

F: How do compete with Apple and Google and other companies that are wired into my life because I have existing accounts with them or hardware that by default uses their services? How do you compete without that entrenchment? I see Dropbox as a tool, not a place I spend time.

W: That’s incumbent upon us to create the kind of workflow, or integrate with your workflow, to make it the kind of place where you do spend time. You’re not everyone. Lots of people are running a good part of their lives or businesses off a Dropbox account. I think that, for the incumbent players, the advantage any specialist has is that focus.

W: There’s tons of competition. In most cases, what we’re really competing with is old technology: shared drives that were installed 10 years ago that are locally administered by an over-worked IT department and may or may not work or fall down on the weekend. A major reason that companies are considering our service is that they want to get out of their shared drives. We’re competing against services like SharePoint, which I understand to be a multibillion-dollar business for Microsoft but is not particularly user-friendly and requires users to go through a lot of hoops to collaborate. We’re competing against certainly other cloud services: Google, Apple to some degree, Microsoft to some degree. Then smaller players as well. The reason it’s competitive is that everybody understands that this market is huge. Over time, if you build up a market of half a billion people, there are a lot of things you can do at that point.

F: If this is a nine-inning transition, which inning are we in?

W: It’s probably the first, if you look at our size and scale relative to the opportunity. It’s early.

Correction, November 7, 2014: An earlier version of this article quoted Woodside explaining how Dropbox splits data into “four-bit” files. He misspoke. The text has been updated to reflect the accurate figure.

This item first appeared in the Nov. 4, 2014 edition of Data Sheet, Fortune’s daily newsletter on the business of technology. Sign up here.