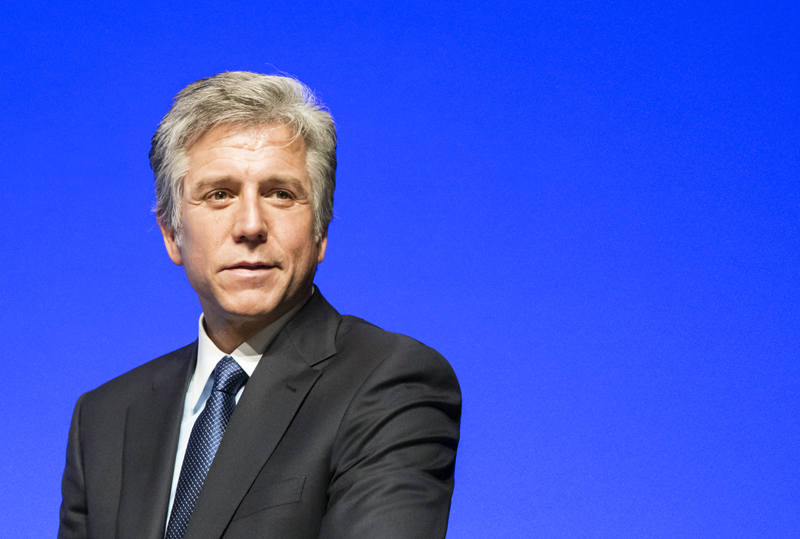 Changing the business model of a company with $22 billion in revenue is at the top of Bill McDermott’s to-do list. New cloud-based business models are disrupting the enterprise-software industry, and SAP (SAP), one of the giants, faces significant challenges from Salesforce.com and other fast-rising competitors. The German company recently cut its profit growth forecast for the year, largely because the cloud-based model reduces upfront revenue. McDermott, 52, talked recently with Fortune about managing the transition and more. Edited excerpts:

You’re facing a classic challenge: the big, highly-successful incumbent vs. competition using new models. Historically incumbents don’t have a great record. How are you confident it’s going to work for you?
In our industry there’s a lot to be said for having experience running global companies in 180 countries in every industry. That core competency of knowing how enterprises run really helps. Information now has to be in real time so people can make instantaneous decisions, and provisioning this information in a cloud environment is a more economic model. But the big idea—how we’ll win—is the business network.

Tell me what that is.
We recently announced the acquisition of Concur [a travel and entertainment software firm]. This builds on a couple of other moves we’ve made. Think about the challenges of managing temporary labor, which is the fastest-growing part of the labor market, or all the expenses associated with the business ­traveler—you’d want information on those costs in real time. SAP has cornered the market on what we call the business network, the stuff that you do within companies and between companies. That will differentiate SAP in the new economy.

So the network means that while the software we’re discussing has traditionally worked within the company, and maybe with some suppliers, you now mean it to connect far more broadly. Is that the big idea?
Exactly. For example, today, when I first met you, you were on your device. You might in fact be contacting Uber for ground transportation after the meeting. Or perhaps you’re going to go book a hotel. And perhaps even an airline where you want your favorite seat, and tonight you might get something for dinner with colleagues. There’s a very complex global network that’s out there on the Internet right now, where Concur has a center seat in managing all of that and all of those processes.

And instead of you at the end of your trip having to fill out an expense report, wouldn’t it be nice if it was all digital and done for you? And wouldn’t it be nice for your employer if it was updated in your company’s ERP system, so financially everything was under control? That’s one example of the travel business network that SAP is leading.

Another big theme of yours is simplicity. Appropriately, it’s a one word theme. Simple. But your software manages the global operations of giant companies. How can that ever be simple?
That’s a great question. There are two themes at play here in our branding. One is “run,” because we do run the most complex global organizations in the world. And the other is “simple.” How can you take all of that elegance and sophistication and provision it to the company in a simple way?

As I talk to CEOs and public officials all over the world, the most intractable issue of our era is complexity. How do we beat it back? I think Michelangelo might have had it right when he said the ultimate form of sophistication is simplicity. What we want to do is take all the complexity and hide it, so when you do your business on your device, all that information is provisioned to you in real time, all those business processes are elegantly and smoothly managed, and ultimately you get competitive advantage because you get speed, access to new markets, and new innovative business models, so you win the game.

So the complexity must be there, but it can be kept out of the customer’s hair.
Exactly, and you know one of the things people say to me is, how can you take credit for simple? Because I’ve got the great simplifier. SAP HANA, which is the in-memory platform for managing structured, unstructured, social, all the big data that operates in the business. You can do it on one platform and do it in real time.

Big data is such a huge theme, the sheer volumes of data that companies have and will have is rapidly becoming overwhelming. How is SAP’s solution to that problem better than somebody else’s?
Well, SAP HANA is the only true in-memory platform in the industry.

And in-memory means it’s there and immediately accessible, right?
Exactly. And that includes all the transactions that a business might be doing. So if you’re selling toothpaste and you’re Colgate in Latin America, and you want to know how that’s doing versus China, and you want to see it in real-time, you can do that. If you want to take all the unstructured information, perhaps it’s what someone is writing in a CRM system to say that XYZ customer had such-and-such a meeting with me today, or you simply want to aggregate data from Facebook or Twitter and really get the wisdom of the crowd to the sentiment analysis from your customers, HANA can get all that data and shape that in main memory. It is the equivalent to the enterprise of what Google is to the Internet.

You’re not a techie, but you’re running a high-tech company. How?
I see everything through the eyes of the customer and, fortunately, I’ve encouraged 67,000 of my colleagues and 2.1 million people in our ecosystem to do the same. In the end, the customer must win, and I think the idea of having this empathy for the total customer experience is what counts.

You have a new book titled Winners Dream, and a whole section is called “Empathy,” which has become a hot word in business recently. Why do you think that has happened now?
I think people realize that the customer relationship is fragile, and if you don’t have a very thoughtful relationship with your consumer, you could cease to exist pretty quickly. I got my first lesson in a delicatessen when I was 16 years old, and if my customers didn’t keep coming back, I didn’t make payroll and I’d go out of business. Empathy gets driven into you pretty early when you’re a sole proprietor like I was.


Customers are being asked to put more and more valuable data in the cloud. They’ve got to worry about how much they can trust doing that. What’s your answer?
We’ve been at this now for 43 years, running the biggest, most important companies all over the world, and that experience of managing processes and data and information is a core competency of ours. We also believe that data centers have to be domiciled where the customer wants them to be. So if a customer is located in Europe and they have a particular concern about a Northern California data center holding all their information, that should be respected and the data should be in Europe, which is what we’ve done in building our clouds.

Geographically and strategically, where do you see your biggest growth opportunities?
Geographically, it’s well-known that the BRIC countries have been a wellspring of growth, but right now we’re very focused on Africa. Seven of the 10 fastest growing markets in the world are in Africa. They’re not big yet in terms of needle-movers, but they will be. The Middle East has been particularly exciting for us. And we continue to do well across Southeast Asia and also parts of South America that are just busting.

I always believe that if you are truly innovative and you’re designing solutions for the ages, which we are, you’ll also move the needle in big markets. So I think the trick to this is making sure you do move the needle in the big markets, and then you layer on this huge growth in the smaller ones, to have a really successful company long-term.

And strategically, what’s the highest growth potential in the plans you’re making?
As I think about HANA and the HANA platform being the de facto standard in memory platform for the free world, I think it’s a HANA world. So that would certainly be one.

As I think about industries, I think about not just the Internet of things and how it impacts all industries, but I think about healthcare, as an example, as a huge breakthrough industry, one that really needs some serious problem-solving. I like to find big problems and help solve them.

You’ve announced a big initiative to simplify SAP’s complex structure, and many employees will have to be retrained. You’re asking 67,000 people to do things differently. What are the next steps?
Many large global companies today have too many management layers between the top executive and the ultimate customer. So we had to de-layer the company. When you think about innovation, the cycles are going so much faster than they ever have before. So what we used to innovate in 18 months is now coming out in monthly or even weekly cycles. The other thing you have to do is empower people. Once you come out with the plan, I have no interest in having management teams inspect people’s progress. I don’t want managers that report the news. I want managers who are out there on the frontlines making the news.