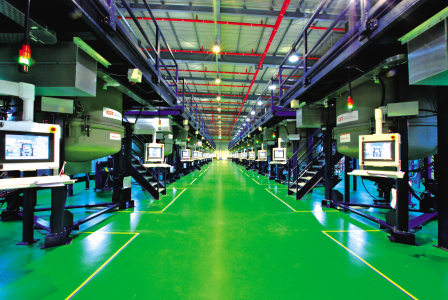 After keeping nearly a dozen lawyers in expensive suits cooling their heels for an hour outside his Springfield, Mass., courtroom, Judge Henry Boroff moved briskly to the heart of what mattered to Apple: 13 provisions in its contract with GT Advanced Technologies (GTAT) — provisions that GT claims are so “oppressive and burdensome” that they sent the company into bankruptcy.

Apple insists that the terms of the contract are too sensitive to be released to the public, and it wants them kept under seal. Judge Boroff might have been more receptive to that argument if he hadn’t read the documents in question.

He told Apple’s attorneys Wednesday that he was “having some trouble” finding any trade secrets or commercial interests in them that would justify a blanket seal.

“I’m seeing what looks incredibly like a construction suit, where a homeowner says to the contractor, ‘It didn’t come out the way I wanted to,’ and the contractor says, ‘Well, it would have come out that way if you hadn’t changed the specifications.’

“I’ve got a stack of documents a foot high,” he added. “It can’t all be under seal.”

Judge Boroff gave Apple until Monday to list — by page and line — the sections that could hurt the company.

“I want to give Apple the protection it deserves,” he said, “but not more than it deserves.”

The other items on the court’s agenda were adjourned until 10 am Tuesday — including a motion to unseal that was filed by Dow Jones on behalf of the Wall Street Journal.

Adding to the complexity of the case is the sheer number of interested parties. An address list of GT’s creditors, filed with the court last week, runs for 225 pages. Some of bigger creditors formed a committee overnight and hired their own team of lawyers.

One nugget of information about GT’s Mesa, Ariz., operations did come out at Wednesday’s abbreviated hearing. A lawyer representing the company asked permission to slow the GT’s cash “burn rate” by not starting any more sapphire boules. The raw materials are expensive, he said, and there are already “about 1,000 machines” in Mesa growing sapphire.

See also: Apple’s got a mess on its hands in Mesa, Arizona