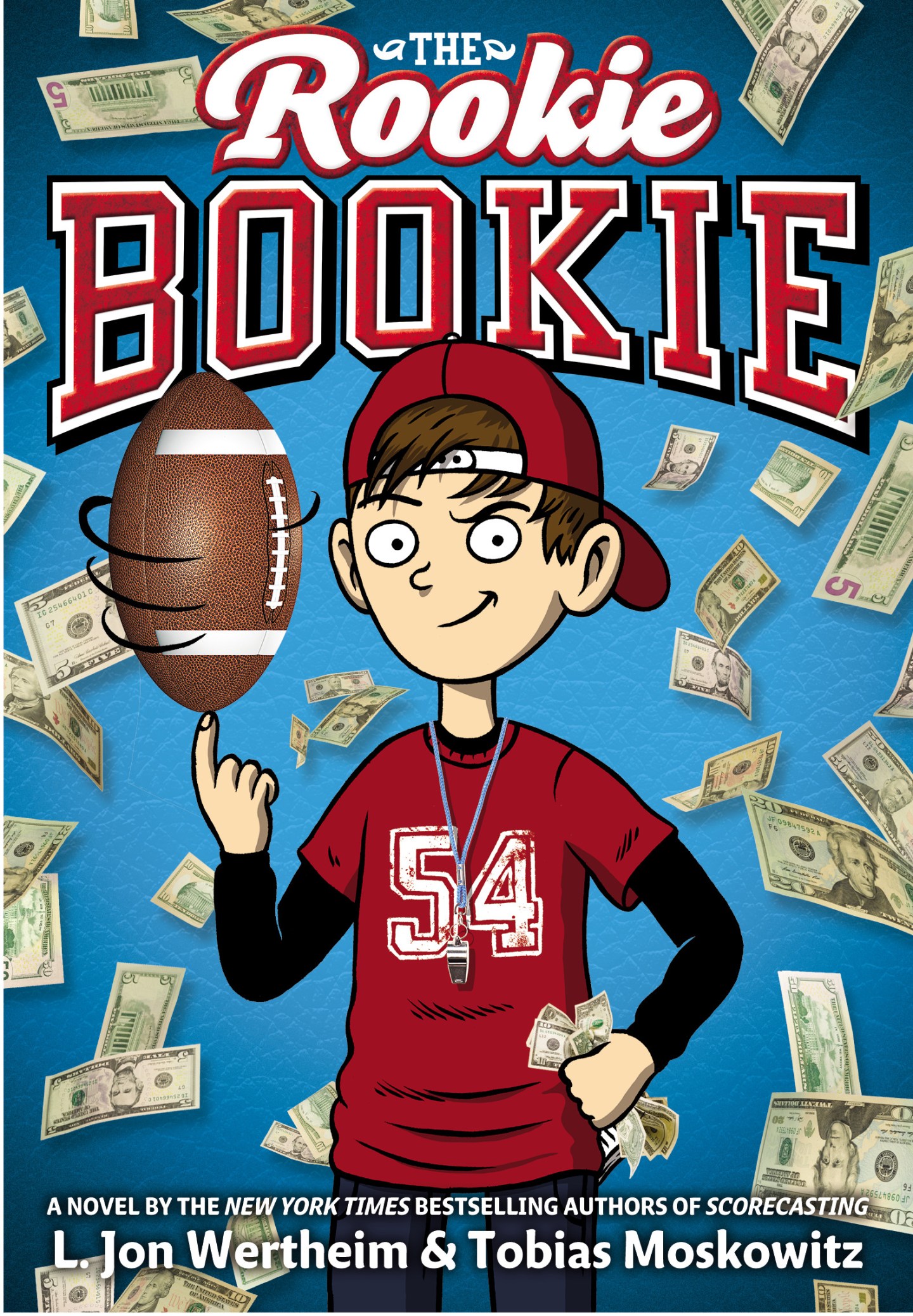 If you’re the parent of a young, avid reader and sports fan, do you really want your kid to be reading about sports betting?

You do if the book is The Rookie Bookie, which uses the fresh, somewhat edgy topic of a seventh-grader running a football betting ring to teach young readers about finance and investing. Its main character Mitch doesn’t have a crush on Jamie (he swears), but he sure listens up when she instructs him to trade away his first pick in the fantasy football draft. (“Everyone wants it, and they think it’s more valuable than it really is. Sure, you’ll get a good player. But then you won’t go again until the last pick of the second round.”) As Mitch and Jamie work together to run a betting ring, Mitch comes to learn a lot about finance, the business of sports, and maybe a little, tiny bit about girls, too.

The book, out this week, is the first children’s literature effort from L. Jon Wertheim, the executive editor of Sports Illustrated and our colleague here at Time Inc, and Tobias Moskowitz, with whom Wertheim co-wrote the book Scorecasting: The Hidden Influences Behind how Sports are Played and Games are Won in 2012. Clearly, the two of them still had the stats bug, and sought to apply it in a new setting: young-adult fiction. Fortune sat down with Wertheim here in the Time Inc. building to ask him about the book and its origins. What follows is an edited transcript.

Fortune: What made you and your coauthor want to write this book?

Jon Wertheim: Well, we had written a mainstream, adult non-fiction book, and we were trying to figure out what to do next. We considered writing a sequel, but we both have full-time jobs and many children between us, so we decided to do something different.

Why a young-adult book as the follow-up to Scorecasting?

When that book came out, I was surprised how many kids we heard from. It wasn’t just 35-year-old Sabermetrics types. And then it occurred to us, some of the basics of behavioral economics—loss aversion, omission bias—you can kind of explain to 10-, 11-, and 12-year-olds, which is what we have. There’s so little out there about financial literacy for kids. It does seem to be this huge gap, and we said let’s try this: We’ll write a fun story and we’ll embed some sort of behavioral economics basics, and who knows. This was a labor of love, more than anything.

When you wrote Scorecasting, did you guys consciously try to make it easy for young people to understand?

Not necessarily, but Toby [Moskowitz] is a star economist at the University of Chicago, so obviously this was a different kind of writing than he’s used to. Freakonomics was always sort of the model. But I think we were both surprised by how young Scorecasting skewed.

How do you know what is too much for kids to understand and what is not? For instance, early on in the book, the protagonist mentions Warren Buffett…

That was a lot of the point. A lot of kids have probably never heard of Buffett, but he could buy every single sports team and still have money left over. You know, we had a focus group of six, and that was a bedroom of kids. So there were some things that I would run by my son and he’d say, “No kid would ever say that.” Or I’d say, “Do you know who Warren Buffett is?” And he’d say, “No, tell me.” Neither of us is a kids’ book author, so there was a fair amount of trial and error. It was fun.

Tell me about the sports betting plotline. You don’t want to be encouraging kids to gamble on the playground, right, so how did you handle that?

The big moral of the story is don’t do this. But I feel like these kids’ books need some subversive element. They can’t all be after-school specials. So we needed a little bit of a detour to the dark side. You read some of the books that our kids read, and there’s a flirtation with the subversive a lot of times. And then, of course, you learn your lesson in the end. We’re not advocating running a betting pool—but for authenticity’s sake, we wanted some middle school tension. But yeah, I mean, people will see the dollar bills raining down on the cover. This is all uncharted terrain for us.

Were you guys influenced by any specific young-adult books or series?

No… I gotta say, more of it was just this enormous gap in financial literacy. Kids know the difference between Monet and Gauguin, and they know state capitals, and they know math, but if you ask, “What is the deficit?” they have no idea. So the inspiration was more the gaps in financial understanding. A 12-year-old should get supply and demand.

One nice thing about the book is that, although the main character is a boy, there’s a girl behind him really pulling the strings and teaching him about fantasy football, etc. Did you guys seek to make it very gender inclusive?

Yeah, we didn’t want to just write a boys’ book. We both have daughters, and we wanted both genders to read this.

To what extent did the rise in data journalism lead you to this? There’s FiveThirtyEight, and there’s Vox, and that whole explosion in stats.

Whether it’s fantasy sports, or being more conversant in stats, you definitely see more and more kids that are comfortable trafficking in data than when Toby and I were growing up. So that had a part in it. We had a lot of fun with Scorecasting, so then it was just a question of logistics because we both have jobs and other projects. But we thought there was a void to be filled here. It was totally out of our comfort zone, but this was the passion play.

How different was writing kids’ fiction than what you’re used to at SI?

In some ways, it’s a completely different kind of writing. You’re not waiting around for interviews and phone calls, you just kind of go. Which is so nice. It’s a different exercise than journalism.