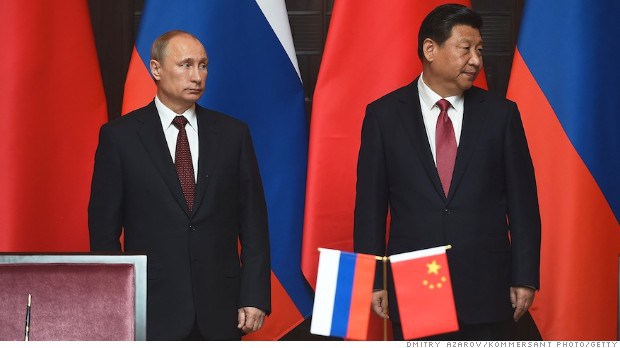 CHINA, SHANGHAI - MAY 20: (L to R) Meeting of the president of Russia Vladimir Putin and the Chinese President Xi Jinping at the Expo Center at the fourth Conference on Interaction and Confidence Building Measures in Asia (CICA) summit on May 20, 2014 in Shanghai, China. Russia and China signed the thirty-year contract for supply of gas. (Photo by Dmitry Azarov/Kommersant Photo via Getty Images) *** Local Caption *** Vladimir Putin;Xi Jinping
Dmitry Azarov/Kommersant Photo/Getty

Last month’s launch of Alibaba on the New York Stock Exchange was feted at a lavish party at New York’s Cipriani restaurant, where CEO Jack Ma told newly enriched investment bankers he was “the luckiest person in this world.” The New Yorker’s John Cassidy—also a columnist for this magazine—wrote that the “mega-IPO confirms that globalization, and the integration of the world economy, continue apace.”

I’m not so sure. The fact that Alibaba now has a market value exceeding Amazon’s and eBay’s combined, even though it has never really competed head-to-head with either company, is not a sign of integration. It is a sign of the opposite. And the implications for every company with global ambitions are profound (see “The New Cold War on Business”).

The end of the Cold War brought gauzy hopes of a world united by commerce. There was an explosion of global trade, followed by the greatest alleviation of poverty in human history. Capitalism seemed to have triumphed. I visited the McDonald’s in Pushkin Square—the largest in the world at the time—soon after it opened in 1990. Russians were instinctively drawn to the cash registers with the longest lines, assuming after decades of socialism that those led to the good stuff. The restaurant had to hire door tenders to inform customers they had entered a new era.

In China, accession to the World Trade Organization in 2001 further advanced the dream of a global trading system built on accepted rules of commercial behavior. Sure, the rip-off of movies and software remained rampant in China. And yes, stories of Western companies whose Chinese partners opened up competing shops down the road were legion. But Western businessmen, besotted with the promise of a billion-plus consumers, flooded into China in the belief that as the economy developed, commercial rules would follow.

Since the financial crisis of 2007–08, however, optimism has faded. In Russia the McDonald’s at Pushkin Square has been shuttered—a victim of the growing battle between President Putin and the West over Ukraine. In China the story is more subtle but also more disturbing, if only because of China’s outsize role in the global economy. President Xi Jinping has promised to pursue economic reforms and further open China’s economy. But the nation’s cynical attacks on Western companies—
accusing Microsoft of monopoly, for instance, when the company sells only one of every 10 copies of its software used in China—suggest otherwise.

Most Western businessmen are reluctant to criticize the Chinese government, fearing retribution. (The same companies criticize Western governments with abandon, proving the difference between the two.) But one who hasn’t hesitated to blow the whistle is Fred Smith, CEO of FedEx. The delivery company was an early entrant into China, and as chairman of the U.S.-China Business Council, Smith was an ardent advocate of China’s admission into the WTO. In the past few years, however, FedEx operating permits were held up by Chinese regulators, while permits for thousands of small competitors got the green light. In a speech at Tsinghua University earlier this year, Smith said foreign firms had “grave concerns about China’s ‘indigenous innovation’ policies.” While encouraging domestic innovation is a laudable goal, he said, the actual effect has been a system of “subsidies, incentives, and preferential access” that is “inherently protectionist.”

China’s defenders argue that protectionism is hardly unique to China. And they are optimistic that as China becomes more invested in the global trading system, it will have more reason to abide by the system’s rules. But we may be learning the limits of capitalism without democracy. If Xi isn’t willing to protect the rights of his own people or give them the benefit of the rule of law, why should anyone expect him to do the same for global companies?