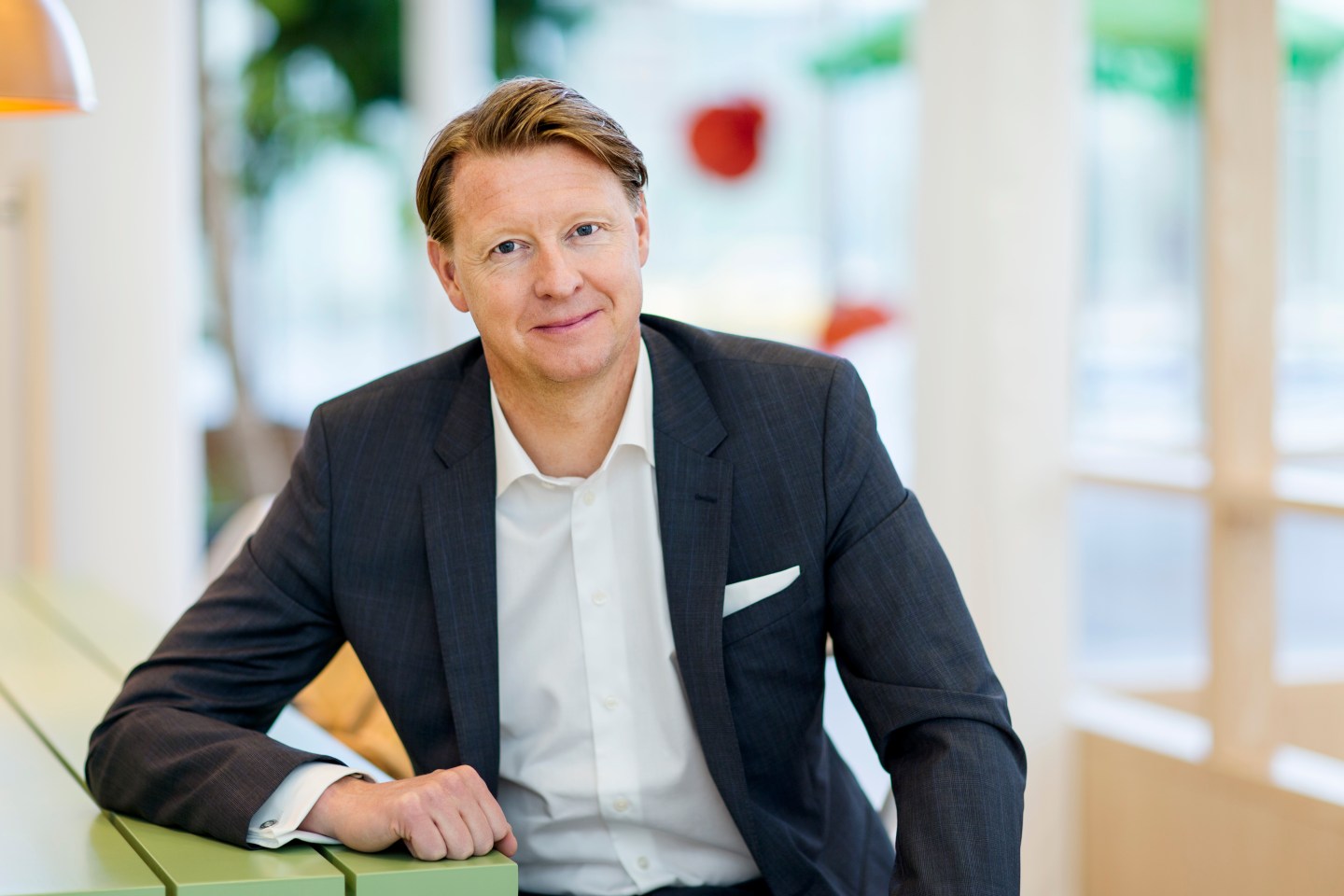 A decade ago, almost 75% of Ericsson’s annual sales came from hardware. Last year, almost two-thirds of the Swedish communication company’s roughly $31.5 billion in revenue (based on current exchange rates) came from software and services. CEO Hans Vestberg is pushing for more.

That plan came alive this week in two separate, but very much related developments: the company’s decision to buy a majority stake in cloud company Apcera (its fourth such investment in two months), and an overhaul of its core network technology that makes it far easier for Ericsson’s customers to turn on new features or services with software upgrades rather than hardware retrofits.

In 2010, Ericsson managed several dozen different hardware and software architectures, not an unusual model for the telecommunications industry. But the push to cloud services means it’s time to simplify.

“We decided by 2015, we want to have three hardware platforms, two to three software stacks,” Vestberg told Fortune, while visiting New York for investor meetings. “When we did that, we also decided that we wanted to virtualize all our products for the future. You can buy them per capacity, buy them per how much they are used. We couldn’t do that in our industry before, it was impossible.”

Where will that future take Ericsson, especially in light of competitor Huawei Technologies’ new plan to spend $4 billion on research and deveopment over the next four years?

You probably know approximately 40% of the world’s mobile traffic rides on its technology, but you might not realize Ericsson also stands behind the vast video resources at media giant BBC. And that’s significant. “I think that we are trying to put data communications, telecommunications and media communications together and be the No. 1 player there,” Vestberg says. “They have never come together before, they will come together in the next five years.”

Fortune asked Vestberg, who opened the Fortune Brainstorm Tech conference this summer in Aspen, to put that transition into context. His comments were edited for clarity and brevity.

Is Ericsson’s sharper focus on software related to your recent cloud investments?

Of course, because suddenly now our telecomm products are virtualized, except the radio side. Everything from routers to billing systems is virtualized. We could have a big, big discussion about this, it would take hours, but all the networks have been built vertically. … If you virtualize your product, you can build it horizontally. Why would you want a billing system or an operating system horizontal? Two things: one, you can lower the costs, and some are looking there; but the bigger benefit comes from new services you’ve never been able to add before.

Why is this important now?

We are in the second era of one of the biggest techno-revolutions we have ever seen. Every techno revolution has two phases. In the first phase, you build the technology. Think about the last 30 years, up to 2010. There were only three services you could get from a network: fixed broadband, voice and SMS. All networks were built for that. Then a lot people came along who discovered you could come do a lot of things on that network that had nothing to do with it: Google is a perfect example. Facebook is another one. Now they are innovating on that, and that’s the phase we’re moving into. If you want to take advantage of this, you need to change the way your technology is set up, because everything is set up for voice, SMS and fixed broadband. Some [service providers] might decide to deliver connected cores, machine-to-machine [applications], healthcare solutions. This will mean connecting private clouds with telecommunications clouds, and the only way to do that is with a virtualized platform.

How does this recast Ericsson? People think of you as an equipment provider.

Historically, Ericsson has never segmented our customers. No need, they all were doing the same thing. But we see a tremendous segmentation of carriers. I will give you examples, and you’ll understand what we’re doing. Number one are the network developers. These guys say, “Hey, I don’t care what happens on my network. I have a great network, it’s not fancy, one flat fee for data. I don’t care about SMS or voice, just one flat fee.” Then you have the service creators. Those guys pour money into the IP network, they make it more aware, more smart, add everything from radio access to 4G [connectivity] to routing. They know they are going to deliver new types of data services, to new industries even. These two operators are very different, and they are investing extremely differently.

How important is what you call the TV and media piece of your business?

It’s estimated that 40% of the networks in the world today are video, it’s just going to increase. The big thing here is optimization. So we’re doing everything from caching to acceleration to seeing that we can play it on any device. It’s not super simple if you have content that one person is using [on] a small Samsung [handheld], another on a big iPhone 6, another on an iPad, the fourth on a computer. The network needs to know that. Then you need to give them exactly as much capacity as they need. You don’t want to give them too much, because then you have another problem. That’s TV and media in one sense for us. The other sense is that if you’re a broadcaster, you face the same problem. Time-based TV is great, but usage is going down. All other TV consumption is going up, and you need to prepare for that.

For Vestberg’s perspective on the evolution of mobile networks—ones in underserved communities that will connect an additional 1 billion people within five years—see his video interview during Fortune Brainstorm Tech.

This item first appeared in the Sept. 25 edition of Data Sheet, Fortune’s daily newsletter on the business of technology. Sign up here.