Alibaba’s Maggie Wu and Lucy Peng: The dynamic duo behind the IPO 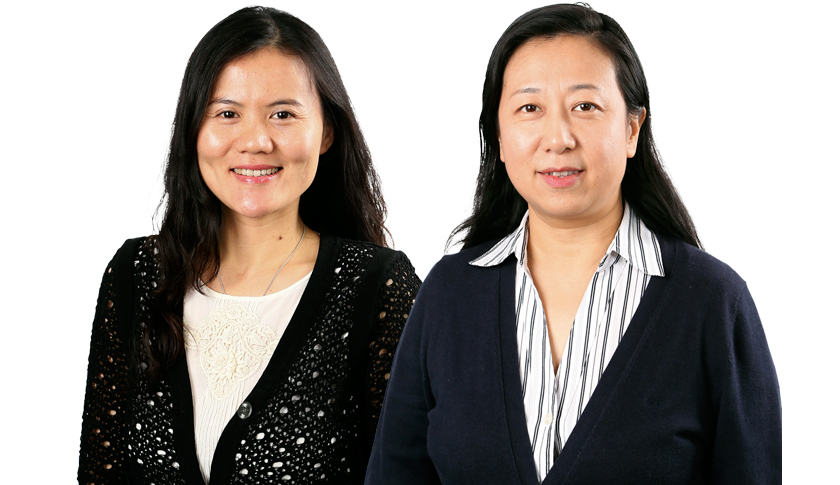 About the only thing Wall Street didn’t hype in the run-up to Alibaba’s initial public offering is the Chinese tech giant’s remarkable track record for populating its top ranks with women. A third of Alibaba’s 18 co-founders are women, and a similar percentage constitute the company’s powerful new partnership group, which essentially controls the company by nominating a majority of its directors. Among them are CFO Maggie Wu and Lucy Peng, head of Alibaba’s HR and the affiliated Small and Micro Financial Services Co., which owns Alipay, an online payments system—the top female stars at the company who each have wide influence. Citing restrictions about speaking publicly before the IPO, both declined interviews with Fortune. Here are their stories.

The Master of Complexity

As a testament to her business acumen, Maggie Wu, 46, skillfully oversees Alibaba’s byzantine financial structure, perhaps the most complex among the world’s tech companies. It includes an offshore holding company that allows foreigners to own shares of Alibaba, which is a maze of interlocking businesses. And going forward she will have to deal with the controversial spinoff of Alipay, which irked some shareholders.

Wu prepped for such a challenging role at KPMG, where she had worked for 15 years before joining Alibaba in 2007. Jane Jie Sun, the COO of Chinese travel site Ctrip, remembers working with Wu in the mid-1990s in KPMG’s Silicon Valley offices. She says Wu was eager to glean financial strategies from upstarts like Yahoo and Netscape. Says Sun: “When we went to client offices, she was always very eager to learn and compare the differences.”

These days Wu spends her time selling Alibaba’s proposed IPO, which would value the company at about $160 billion. During
an 800-person lunch at New York’s Waldorf Astoria in September that kicked off the IPO road show, chairman Jack Ma warmed the crowd by telling jokes before Wu agilely fielded investors’ tough questions, such as whether Alibaba could sustain its sky-high operating margins and how much Alibaba could make in mobile.

After the IPO, Wu will lead the effort to improve Alibaba’s shaky reputation for governance and transparency and also explain its puzzling acquisition strategy, which recently included a Chinese soccer team and a supermarket operator.

If anyone’s up for that tall challenge, it’s Wu, who’s always ready to learn and grow.

Lucy Peng, once an economics teacher, joined Alibaba just as the Internet was taking off in China. In the late 1990s, when Ma, himself a former English teacher, ran the startup from his Hangzhou apartment, he hired former teachers and couples who shared his values—not necessarily those with dotcom skills. The young instructor was drawn to Alibaba because her husband had already worked with Ma; he eventually would run Taobao, Alibaba’s popular eBay-like marketplace.

“In 2013 when Peng’s name was being floated in the Chinese press as Alibaba’s next CEO, she wrote a company-wide email saying she supported Ma’s choice whoever it might be.”

Peng, 41, didn’t join Alibaba expecting big success. “I just enjoyed the process of doing something with a group of enthusiasts,” she once told the China Entrepreneur Club. In the early days, Peng created Alibaba’s HR department. A decade later she compared the company’s unique culture to that of Starbucks. “Each Starbucks store was like a family,” she said in 2009 after visiting the U.S. “The expression in the eyes of the employees was like those often found between sisters and brothers rather than co-workers.” She set up a “mom and pop” model at Alibaba in which one executive, “mom,” in every group focused on fostering teamwork and inciting passion, while another, “pop,” did quantitative performance assessments.

Porter Erisman, an American who worked at Alibaba from 2000 to 2008 and this year released the documentary Crocodile in the Yangtze about the company’s early years, remembers Peng as a funny and down-to-earth leader. “She was always part of the core team,” he says. In 2013, when her name was being floated in the Chinese press as the company’s next CEO, she wrote a companywide email saying she supported Ma’s choice, whoever it might be. (Another executive eventually got the job.)

Though she lacks a typical management background, Ma picked her to oversee Alipay because of the principles she holds from her teaching days: humility and passion. “In Ma’s management style, sometimes it’s more important to embody his values than have a specialty or expertise,” says Erisman. Adds an executive close to Alibaba: “Jack really trusts her.”

Correction: Porter Erisman, the documentary filmmaker, is American, not Canadian.