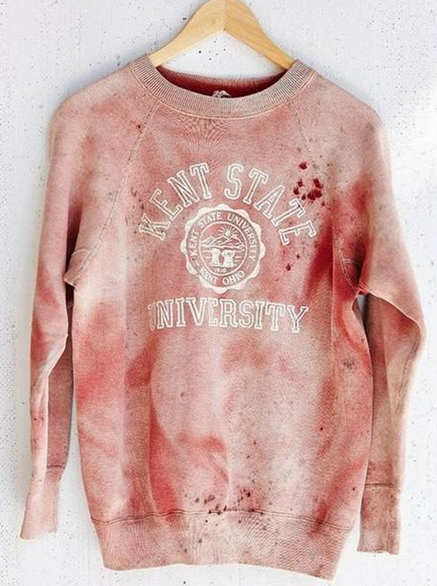 Other retailers have made similar gaffes. Just a couple weeks ago, Zara was condemned by consumers for releasing a pair of pajamas that looked like concentration camp uniforms. The list of other off-color apparel sold over the years by Urban Outfitters and other retailers includes the infamous “Eat Less” t-shirt, the “Depression” t-shirt, and apparel featuring apparently racist images.

Is such repeated controversy good for business, especially among millennial consumers, the target demographic for these stores?

Brian Sozzi, a chief equities strategist at Belus Capital Advisors, said that selling such unsavory products may have helped businesses in the past, but not anymore.

“The first impression is that it’s good and that it drives free publicity, but that’s increasingly coming to not be the case,” said Sozzi. That’s due to the popularity of social media, including Twitter and Facebook — platforms on which consumers can “constantly grade” brands and offer their opinions instantly.

“This type of marketing and apparel is not positively impacting sales, it’s hurting sales,” he added. Sozzi pointed out that this comes on the heels of some tough quarters for Urban Outfitters, too. In fact, sales have declined for four consecutive quarters even with founder Richard Hayne returning as CEO at the start of 2012.

Robin Lewis, author of the recently published book The New Rules of Retail, said that the controversial products sold by these retailers are “outrageous.” He added: “If they can’t think of any other kind of PR ploy than this kind of sensationalism, they probably have to fire their marketing officer.” Lewis continued that putting the sweatshirt for sale probably didn’t get through to top management until it was too late, as it wouldn’t have been approved otherwise.

“I was quite shocked,” said Lewis.

Lewis adds that he doesn’t believe such repeated controversy helps when hawking a product. “I think it’s a huge marketing misstep,” he said.

“There may be some young people out there who this appeals to in some kind of sick way,” he said. “I mean, we do have a culture that enjoys violent video games.”

But while Scozzi and Lewis decried Urban’s misstep this week and in the past, Edward Hertzman, a millennial and the publisher of Sourcing Journal, a publication that focuses on the retail apparel and textile industry, had another thought. At first, he believed selling the product was simply a “disaster,” but then realized it may have been a “very bad coincidence.” The person “responsible for sourcing the sweatshirt” could have “had no idea what [he or she] was buying,” said Hertzman. Buyers are typically in their 20s or early 30s, meaning the person may simply have been unaware of Kent State’s history. As a result, the item could’ve been added to the online catalogue (there was just one available) without a second’s thought.

And with social media’s help, the controversy blew up before management had the chance to temper the flare, Hertzman added.

“Even if [brands] don’t intentionally put themselves out there, every consumer has become a brand ambassador,” he said. Of course, repeated offenses are no good for a brand either. “Everyone needs to think before they act,” he added.