What Big Food does with ‘organic’ and ‘natural’ 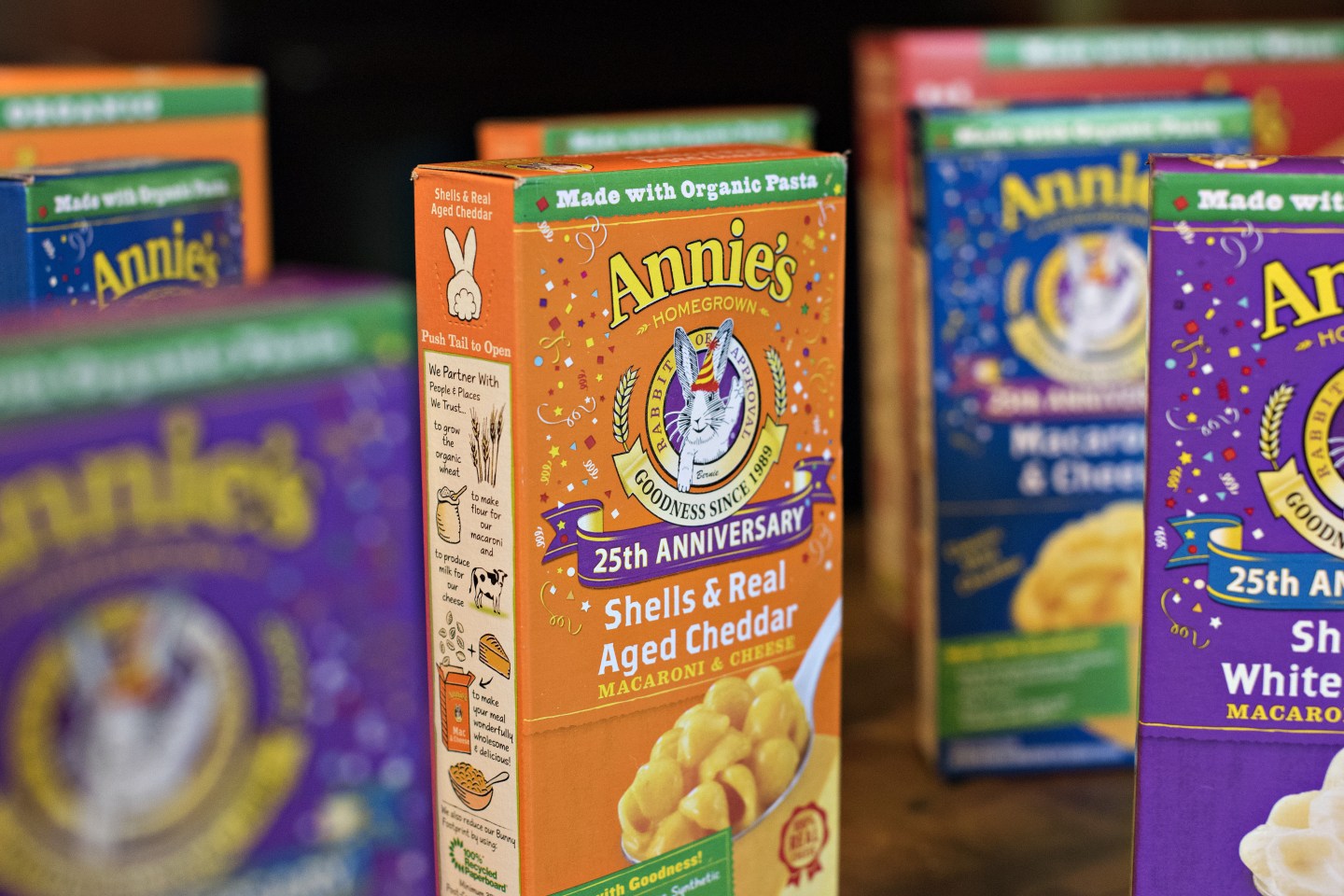 Annie's Inc. products are arranged for a photograph in a kitchen in Tiskilwa, Illinois, U.S., on Tuesday, Sept. 9, 2014. General Mills Inc., the maker of Cheerios, Bisquick and Yoplait, is acquiring Berkeley, California-based Annie's Inc. for about $820 million, gaining a popular lineup of natural and organic foods. Photographer: Daniel Acker/Bloomberg via Getty Images
Photo by Daniel Acker/Bloomberg—Getty Images

In his 2006 book The Omnivore’s Dilemma, Michael Pollan highlighted Cascadian Farm, General Mills’ (GIS) line of organic food products, as a prime example of what happens when organic food is marketed by big, industrial food companies. The company that in the early 1970s “began as a quasi-communal hippie farm,” Pollan wrote, had, in the words of its erstwhile-hippie founder Gene Kahn, morphed into a “PR farm” for General Mills after that company acquired it in 2000. Kahn joined General Mills as a vice president, and he enthusiastically signed on to that company’s far-more-corporate approach to organic food.

Ever since, critics of the food industry have cited Cascadian Farm as an outfit that adheres to the letter of the law without necessarily adhering to the spirit of the organic-food movement. Similar complaints are already being issued in regard to General Mills’ announcement on Monday that it will acquire Annie’s Inc. (BNNY), a Berkeley, Calif., company that The New York Times noted is known for its “earthy vibe.”

The question for critics is whether General Mills cares more about Annie’s vibe than it does about its fealty to organic principles. In an email to Fortune, Pollan said he’s not familiar with the details of the Annie’s acquisition, but added that “the parallels with Cascadian Farm would seem to be relevant. Is General Mills committed to the ideals of Annie’s, or just the brand?”

For investors, it probably doesn’t matter. General Mills’ cash offer of $820 million (or $46 a share) is a 37% premium over Monday’s closing price. That’s still considerably lower than the $51.36 Annie’s shares reached in October.

The acquisition is meant to help General Mills make up for flagging cereal sales. The company notes that the “organic and natural” category is growing at about a 12% annual clip industrywide. General Mills’ Small Planet Foods division, which markets Cascadian Farm, Muir Glen, and other labels, reported revenue of about $330 million last year. Annie’s annual sales are at about $200 million a year.

The near-absence of organic crunchiness was noticeable in General Mills’ announcement of the acquisition. The closest it got was in a statement from Jeff Harmening, General Mills’ executive vice president and chief operating officer, who alluded to Annie’s “purpose-driven culture and authentic brand.” Otherwise, he was all business:

Annie’s competes in a number of attractive food categories, with particular strength in convenient meals and snacks—two of General Mills’ priority platforms. … We believe that combining the Annie’s product portfolio and go-to-market capabilities with General Mills’ supply chain, sales and marketing resources will accelerate the growth of our organic and natural foods business.

Meanwhile, Annie’s CEO John Foraker took to Facebook to try to reassure customers with a statement that was impassioned, but vague:

I want you all to know that our mission, culture, and values and the things we stand for will remain the same. We’ll continue to make the same great products, more of them actually, using ingredients we are proud of, business practices that are respectful of the environment, and that make our planet a better place. We’ve spent 25 years building trust with consumers, one interaction at a time. We will continue to do that. Count on it. I always ask people to listen to what we say, but more importantly, watch what we do! We will not let you down! Our mission: We cultivate a healthier, happier world by spreading goodness through nourishing foods, honest words and conduct that is considerate and forever kind to the planet. that mission is hard won and has been built with integrity. We will never abandon it, but rather we will further it, by putting our product into millions of new homes, which will expand our positive impact even more. I have given 15 years of my life to that mission and I am not stopping now.

A commenter on Foraker’s post noted General Mills’ opposition to a defeated California ballot measure, Prop. 37, in 2012 that would have required food products containing genetically modified ingredients to be so labeled. General Mills donated more than $1 million to defeat the measure. “I will not give money to a company that is against what Annie’s stood for,” she wrote. Her comment received 737 likes, and other erstwhile Annie’s fans piled on with similar comments.

The passionate objections to the merger reveal how successful Annie’s has been in maintaining its reputation of being “homespun and healthful,” as The New York Times put it, despite facts that would tend to counter that image.

Launched in 1989 by Annie Withey, who initially sold the company’s flagship macaroni-and-cheese brand in grocery stores in the northeast, Annie’s was acquired by the private equity firm Solera Capital in 2002. It went public in 2012.

Although much of the coverage of the General Mills acquisition has identified Annie’s as an “organic” producer, that’s only partly true. Many of its products are not certified organic. In 2007, all of Annie’s products bore an “organic” label. Now, only about one-fifth of them do.

Annie’s, then, isn’t any crunchier than General Mills’ existing organic lines, but since Annie’s still has that “vibe,” the question is whether it will help General Mills in the long run. The food giant “risks smothering its latest acquisition target,” concluded Kevin Allison of Reuters’ Breakingviews. While the companies have made assurances that Annie’s will be left to operate independently — maintaining its Berkeley headquarters and retaining Foraker to run the business — while still being able to tap into General Mills’ marketing and distribution infrastructure, General Mills “may be left relying on elusive revenue synergies to make the acquisition play,” Allison wrote.

If that happens, it will save costs, but it could dilute the brand.

That’s the risk for any big food company that tries to have it both ways. The “organic and natural” category is burgeoning, while many mainstream categories — like breakfast cereals — have slowed or stopped growing altogether. But for many consumers, a big part of the appeal (perceived or real) of organic and natural brands is the independence (perceived or real) of the producer. Big food companies that acquire such producers must walk a fine line to maintain that image while extracting the maximum value from it.

They have had mixed success, and the successes have often resulted from allowing acquired companies to go it alone to the extent possible. For instance, while a lot of people know that Ben & Jerry’s is owned by the giant Unilever (UN), the brand is still largely thought of as independent, because in many ways, it is. Ben & Jerry’s takes the opposite side from Unilever on a host of issues, including GMOs.

Its marketing is separate and distinct from that of other Unilever brands. Some “synergies” might be lost, but the long run success of Ben & Jerry’s, which Unilever acquired in 2000, has depended on the brand’s distinctive image.

Conversely, in 2000 (which turns out to have been a big year for such deals) Kellogg (K) acquired Kashi, the once-beloved company best known for its natural cereals, and, over time, managed the brand to disaster.

In 2012 it was discovered that Kashi cereals contained GMOs. This went viral on social media. The company only made matters worse by noting the plain fact that the federal government does not regulate the word “natural” on food labels. That same year, another uproar ensued due to Kellogg’s donations to the “No on Prop. 37” campaign. In 2013, Kellogg moved Kashi from its longtime home in La Jolla, Calif., to Kellogg headquarter in Battle Creek, Mich. — but it has already decided to reverse that move in its effort to restore the brand’s image.

General Mills has certainly done well with its organic and natural lines, which it runs in a separate division called Small Planet Foods. Its Nature Valley granola bars might the opposite of healthy (12 grams of sugar per serving), and even the opposite of “natural,” but their “wholesome” image is what sells them (and the sweetness is what keeps people coming back for more, whether or not they happen to look at the nutrition information.) Despite the fact that industry critics point to Cascadian Farm and other General Mills products as examples of Big Food misusing the organic and “natural” labels, those labels have certainly worked for the brands.

To those critics, the problem is that image has superseded action. General Mills, like the industry as a whole, lumps together organic and “natural” products. While “organic” must meet minimum federal requirements, the word “natural” on a label essentially means nothing.