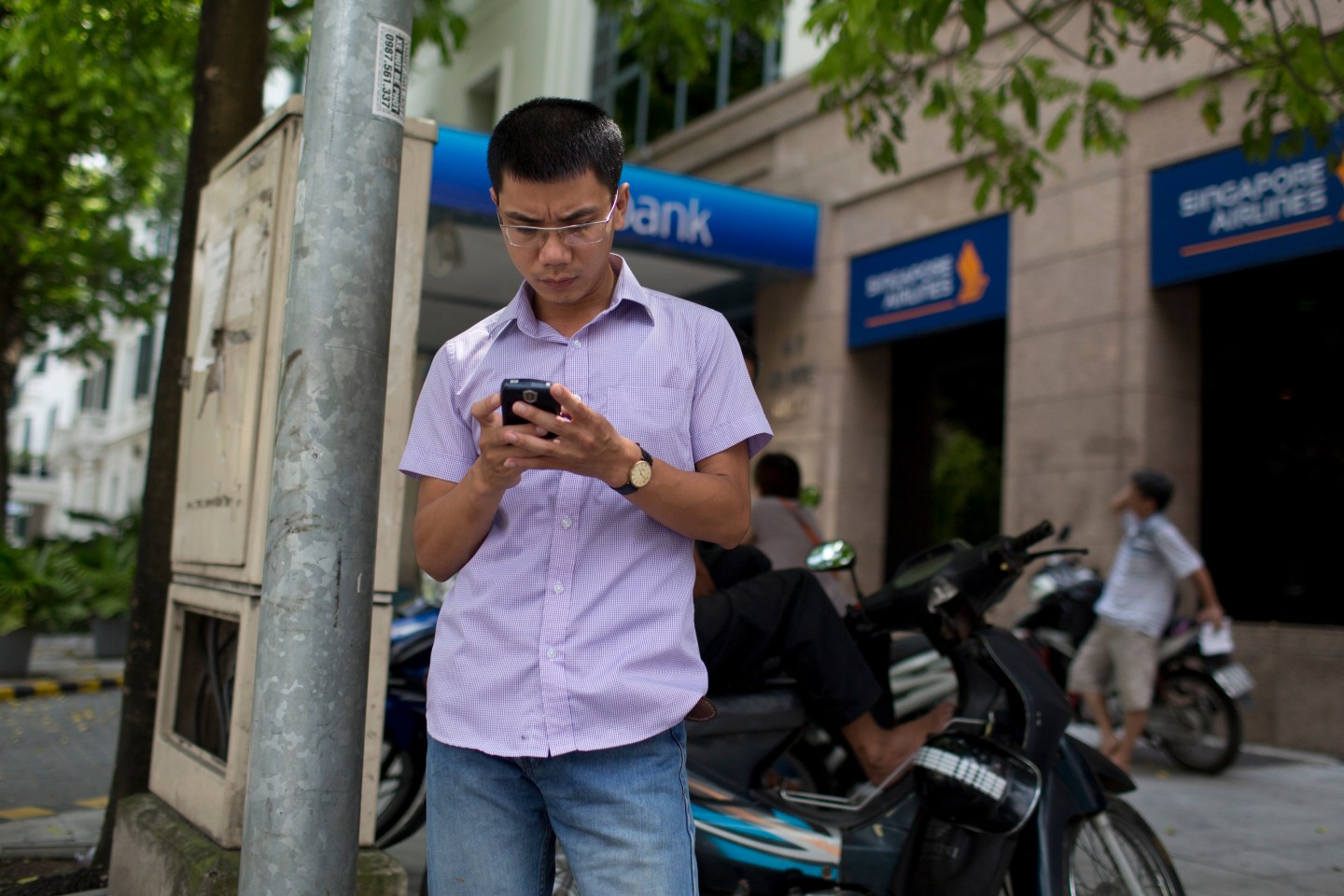 A man looks at a mobile phone on a street in Hanoi, Vietnam in May 2014.
Brent Lewin/Bloomberg—Getty Images

Vietnam, one of the world’s last remaining bastions of communism (along with China, North Korea, and Cuba) has gone gaga over Apple, one of the world’s biggest symbols of free market capitalism and the Western lifestyle. Ironic, yes—but it shows the importance of brand prestige in the minds of some Asian consumers, no matter their politics, ethnicity, or income.

In the first half of fiscal 2014, sales of Apple (AAPL) iPhones in Vietnam have increased nearly threefold, more than any other market in the world. To compare, iPhone sales increased 55 percent and 28 percent, respectively, in India and China in the same six-month period. In Brazil and Russia, they were up 61 percent and 97 percent, respectively.

What are the lessons to be learned from Apple’s astonishing success in Vietnam? Can the company apply them elsewhere in Asia?

The tech company’s dominant position in the country of 90 million people boils down to a fortuitous intersection of three factors: demographics, culture, and distribution. Vietnam’s primarily young and technophilic population is leading a revolution in Internet and mobile phone usage. These same people are extremely status conscious, and don’t mind spending as much as two months’ salary on an iPhone—perceived to be the No. 1 brand in mobility—because it’s a highly visible luxury item considered within reach.

“iPhones and iPads are definitely status symbols that are highly sought after in Vietnam,” says Ryan Lai, an IDC analyst based in Kuala Lumpur, Malaysia.

Then there is the partnership with FPT, a domestic tech conglomerate that has been Apple’s official distributor in Vietnam for the last two years. FPT has opened Apple stores in major urban centers across the country, including two in downtown Ho Chi Minh City. “The main reason for Apple’s fast growth in Vietnam recently is its expansion of retail channels, which account for the majority of mobile phone sales in the country,” Lai says. “The FPT partnership allows Apple products better retail presence than they ever had.”

Retail channels account for 70 percent of iPhone sales in Vietnam. Mobile network operators make up the balance, unlike in North America where they serve as the primary distribution channel.

Of the many emerging markets in Asia, China is biggest. There, smartphones account for the highest percentage of total mobile handset sales among peer markets, at 85 percent. But the market, which Apple CEO Tim Cook has said is a major opportunity for the company, is challenging. iPhone sales in China, for which Apple’s biggest distribution partner is likely China Mobile, are nowhere near the level of neighboring Vietnam.

“Even China Mobile was disappointed with the sales numbers for iPhone since its launch in January 2014,” says Bryan Wang, an analyst for Forrester Research who is based in Beijing. “The actual sales number for the first quarter were not even half of what China Mobile originally anticipated.”

Wang attributes Apple’s overall soft sales in Asia’s biggest market to the fact that Chinese consumers are increasingly drawn to smartphones with large screens that are five inches or more—one reason why Apple may have unveiled the larger iPhone 6 and iPhone 6 Plus models on Tuesday. Chinese consumers also tend to choose price over brand, Wang says, opting for much cheaper Android smartphone from local vendors such as Lenovo, Xiaomi, and Huawei.

Apple seems to hope that it can reproduce its luck in Indonesia, which is similar to Vietnam in that retail channels dominate. Earlier this year, Apple announced plans to build an official retail store.

“The importance of selling phones through retail channels is probably the biggest message from Vietnam,” Lai says. “The operator-reliant strategies that Apple uses in developed markets are less applicable in emerging markets.”