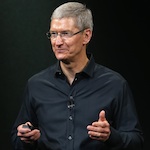 Looking for the official Apple livestream? View it here. For context and commentary, stay right here.

12:00: And that’s a wrap! Stay tuned for hands-on impressions this afternoon, and thanks for reading.

11:52: U2 is giving away their next album away for free via iTunes. U2 fans, start your downloads. Cook calls this one the largest album release of all time.

11:51: “This one’s for Joey Ramone,” Bono shouts at the end of the performance, referring to the punk rock musician who passed away in 2001.

11:44: U2. Here. In the flesh. About to perform. Some folks scream. “It’s an incredible honor for us to have U2 onstage and perform,” says Cook.

11:43: Cook seems to be winding down now, recapping today’s news: the iPhone 6 and 6+, the official release of the mobile system iOS 8, and of course, the Apple Watch.

11:42: Apple Pay works with Apple Watch, Cook reveals in his non-reveal. People applaud, but I’m pretty sure that assumed.

11:41: The Apple Watch will ship early next year for $349. People seem psyched about the price, much less so about when it actually comes out. Folks here give a disappointed “awwww…” “It’s worth the wait,” Cook reassures the audience.

11:40: Nifty way of charging: the charger snaps onto the back of the watch face.

11:38: Cook retakes the stage.”Apple Watch required some deep innovation,” Cook says. “It’s a fitness device, but it’s so much more.”

11:35: Apple’s fitness and activity apps appear pretty versatile, for those seriously exercise to those who do less strenuous activities. This is one of the areas that other smartwatches are most terrible at.

11:34: This is one of the areas that other smartwatches are most terrible at, so if the company can crack this problem, it could have a hit on its hands.

11:33: A fitness app monitors all your activity through the day. A complimentary app helps users set and achieve goals.

11:32: Cook back to the stage. “Being more active is one of the best ways to improve your health. Apple Watch can help motivate people to be more healthy.”

11:30: A new Starwood app launching next spring will allow Apple Watch users to actually open their W Hotel rooms simply by swiping their wrists in front of the door. Colleague Miguel Helft lets out a low whistle. He’s genuinely impressed, which says a lot. (Dude’s tough to impress. Trust me.)

11:29: With a set of software tools called “WatchKit,” developers can create better notifications for their apps. The can also create apps, like the Twitter app, that can be viewed from the home screen.

11:23: Lynch is demonstrating how Siri works on the watch by asking Siri which movies are playing nearby. “Forrest Gump?! Really?!” asks colleague Miguel Helft, next to me. (The 1994 flick Forrest Gump starred Tom Hanks as a kind-hearted, mentally-challenged man who led a colorful life. It was good — Hanks won the Oscar for Best Actor that year — but it was long.)

11:22: A look at how notifications on the watch work. A “quick board” lets users quickly reply back to say, a message from a friend. The quick board will suggest some quick replies to send back. Users can also include some brand-spanking new emoji or record voice.

11:20: A feature called “glances” is basically just that: a quick way to swipe through through different apps, including the controls for playing music. Swipe down, and the glances screen goes away.

11:18: (I wonder how many folks are figuring out whether their credit cards are maxed right now.)

11:17: Press the “digital crown,” and you’re taken to the watch’s home screen. Tap an icon to dive into an app.

11:16: Apple VP Kevin Lynch to the stage to show us the very first public demo of the watch.

11:15: “We’re now at a compelling beginning, designing technology to be worn, to be truly personal,” Ive concludes.

11:14: Although the alloys used in the watch faces are 40% tougher than more traditional watch face materials, Ive emphasizes the overall watch is extremely lightweight.

11:13: The Apple Watch will come in two distinctly different sizes, good for folks like me who have small wrists.

11:09: Apple has designed many different digital watch faces for different preferences. As for the standard watch strap, Ive gives some marketing gobbledy-gook. Basically, it’s a tough, sweat resistant synthetic material. There are also metal straps for a classier look.

11:09: The heart of the watch is a custom-designed chip that combines different features. “It’s essentially miniaturing and entire computer system onto one chip.”

11:08: The Apple Watch has a display made of sapphire, the second-hardest material, second only to diamond. In other words, this thing is seriously scratch-resistant.

11:07: Pressing a button below the “digital crown” brings up contacts you might want to quickly reach out to. You can send a quick sketch or even “something as personal as your own heartbeat.”

11:06: In a video, Jony Ive explains how the watch will sense when you’re lifting your wrist or lifting up the watch and automatically turn on.

11:02: Totally revamped software for the Apple Watch. Cook explains how standard “pinch to zoom” wouldn’t work on the watch because your fingers would cover the content. Instead the watch is controlled with a dial on the upper right side of the watch face. Cook calls it the “digital crown.”

11:00: Here’s the Apple Watch. The crowd literally goes wild and gives Cook a standing ovation. (For more, check out our story here.)

10:56: “We’ve been working incredibly hard for a long time on an entirely new product, and we believe this product will redefine what people expect from its category. I am so excited and I am so proud to share it with you this morning. It is the new chapter in Apple’s story, and here it is…”

10:54: The quickly growing ride-sharing startup Uber has a new feature called Ride Now where you can use Apple Pay. Cook also ticks off many other examples.

10:51: Apple is working with Macy’s, Bloomingdale’s, Walgreen’s, Staples, Subway, McDonald’s, Whole Foods, Disney and Apple’s own retail stores to ensure they’ll take Apple Pay. At McDonald’s for instance, you can use Apple Pay at the Drive Thru.

10:51: So, so very secure. Apple doesn’t know what you bought, where you bought it, and how much you paid for something. The transaction info is between you and your bank.

10:49: Apple exec Eddy Cue to the stage to walk us through how exactly Pay works…

10:47: Just how easy is Apple Pay to use? As easy as placing your finger on the iPhone 6 and 6+’s home button and holding it while Touch ID recognizes your finger print. (There’s the NFC.)

10:45: So the magnetic stripe interface on credit cards is 5 decades old. “No wonder people have dreamed of replacing these for years… But they all failed.”

10:43: “Bigger and bigger” appears to be the new tag line. Also, Justin Timberlake and Jimmy Fallon did the ads for the new phones. *Cue video clip*

10:41: The iPhone 6 comes in silver, gold and space gray and starts shipping September 19.

10:40: No mention of the rumored “NFC” or Near Field Communications feature for the iPhone 6. Guess there’s always next year…

10:33: Apple’s slow motion, or “slo-mo,” vids are even slower now, thanks to the camera’s ability to capture more “frames-per-second.”

10:31: The iPhone 6+ adds “optical image stabilization,” a feature that uses the device’s new motion chip to reduce the chances of your photos being blurry. It’s a huge leap for such a small camera. The camera lens zooms in and out but also moves vertically to take better photos — in low light for example.

10:30: Schiller’s trumping just how much better iPhone 6 and 6+ photos are. Even the skin tones on a lizard are more accurate.

10:26: Photos are even better this time. Why? There’s a new 8-megapixel iSight camera and an all-new sensor.

10:26: Fitness apps are going to be a lot better on theiPhone 6 thanks to its M8 motion processor.

10:25: Schiller: “Thinner design and better graphics should worsen battery life…” Au contraire, Apple believers, the new iPhones offer at least another hour of juice for playing back video and audio.

10:22: The developer says the game is running 1 million polygons per second: hardcore gaming nerd speak for, “Graphics you’ve probably never seen on smartphones and tablets before.”

10:20: They’re walking us through a demo of a mobile game called “Petal.” Cutesy mini-animals. I’m a jaded console gamer, but the graphics here are pretty solid. (Think PlayStation 3-level eye candy, only sharper.)

10:19: Schiller says sustained performance and battery life were key parts of the design process for this generation of phone.

10:17: So what else? Meet the Apple A8, a 64-bit chip that has 2 billion transistors, twice the transistors in last year’s A7 chip. It’s also 13% smaller than its predecessor, 25% faster performance. 50% faster graphics performance.

10:16: What happens with old school apps not customized for the new iPhone 6 and 6+? Well, they’ll work just fine, too.

10:14: New gestures. In Safari, swipe right and left to navigate among different Web pages. Schiller: “It’s so convenient and intuitive, you’ll really like using it.” (I’ll believe when I see it, touch it, and swipe it, Schiller!)

10:13: The larger screen sizes enable Apple to tweak their mobile apps to show more text. In the Mail app, for instance, if you turn your phone to the side, a pane on the left side displays your inbox while you compose a message on the right.

10:10: The display is made with “dual domain pixels.” Schiller on the phones’ sizes: “Yes, they’re bigger. A LOT bigger.”

10:03: The crowd is seriously going crazy as Tim Cook steps out on stage — crazy even by Apple event standards.

10:02: Two minutes in and everybody already has tears in their eyes, not bad.

9:57: And we’re finally seated! Whew. The auditorium is PACKED. The space is definitely a step up from events past, more resembling an awards space (hello, Oscars), than a techie congregation.

9:47: LOTS of fashionistas in the crowd. I’ve never seen so many leather-strapped espadrilles in my life.

9:46: Spotted in line: Airbnb CEO Brian Chesky (or his doppelgänger.)

9:27: In case you were wondering (and hungry), Apple’s pulled out all the stops with pastries and freshly squeezed juices galore. If you’re buying into the current juice craze — er, like I am — you’ll dig the assortment.

9:00 a.m. PT: Stay tuned—we’re on our way to the event at the Flint Center for the Performing Arts in Cupertino.

In the meantime, read our coverage leading up to it. At Fortune, Adam Lashinsky writes about the company’s cool factor, Philip Elmer-Dewitt rounds up what analysts are saying, and our video team looks at leaked videos of the new iPhone. At Time, Doug Aamoth rounds up the newest rumors, Jack Linshi outlines the best parts of the new iOS 8, and our video team looks back at Apple’s biggest product releases.