Improve urban infrastructure? There’s an app for that 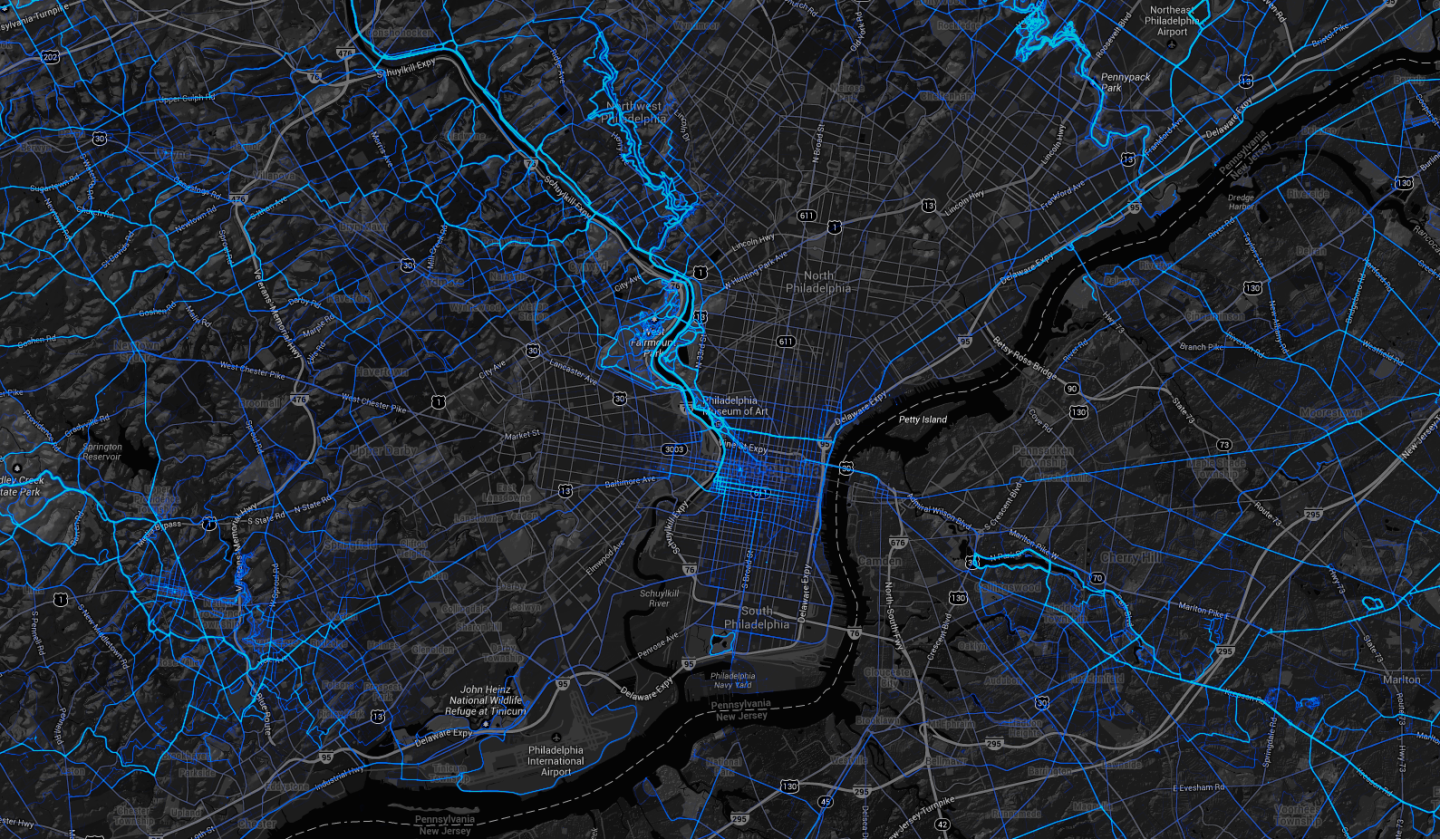 Every weekday morning at approximately 6:30, Willem Heydendael, a 35-year-old medical consultant, hops on his bike and rides 15 miles along the Schuylkill River from his home in the Passyunk Square neighborhood of South Philadelphia to his office in Conshohocken, a suburb northwest of the city. Before he takes a pedal stroke, he performs an important ritual: he launches the Strava application on his iPhone and starts recording his ride. When he gets to work, he uploads the commute to Strava’s website, where he can see his route overlaid on a Google map, along with his average speed, distance, elevation gain, and a host of other metrics. “I like it because the rides add up and it’s nice to see the mileage I’ve done,” he says.

Heydendael’s ritual yields more than a feeling of accomplishment. It also send thousands of GPS data points to Strava, a private company founded in 2009 in San Francisco. Collectively, Strava users, more than a million in all, upload more than three million activities per week, all over the world. One-third of them are commutes. Strava’s mission is to build “the premier social network for athletes,” says Michael Horvath, Strava’s co-founder and president, “something that tells the story of a lifestyle of health, fitness and adventure.”

The Strava app is free to download and available on Apple iOS, Google Android, select models from Garmin, Timex, and Soleus. Most of Strava’s revenue comes from $59-per-year premium subscriptions, which give users access to additional services such as deeper performance metrics, training videos, and enhanced routing capabilities. As on Facebook, Strava users “follow” their Strava friends. But instead of status updates, users see their friends’ rides and runs, and their times on user-generated segments of roads or trails. The fastest person on a segment is dubbed the King (or Queen) of the Mountain, until someone faster comes along. The effect is friendly, unsanctioned competition and, for those who choose to engage in that virtual world, a strong pull to not let your friends have more fun than you.

As Nike and Adidas demonstrate, the recreational athletic community is certainly large enough to support a growing business. But Strava recently identified a different client base whose interests, conveniently, are aligned with those of its core customers: city governments and departments of transportation who want to use Strava’s data to improve cycling and pedestrian infrastructure.

Last year, a transportation planner from Provo, Ut. called Strava to inquire if the company had data that could help him know where to make cycling infrastructure improvements. “It made me realize that yes, in fact, we do,” says co-founder Davis Kitchel. Strava has now amassed more than 300 billion GPS points; when viewed on a heat map, they become a pleasing mosaic image of where users ride.

That kind of data didn’t exist before riders used Internet-connected mobile devices and apps to track their activities. Instead, transportation planners relied on volunteer counters at intersections with clipboards or expensive traffic counters embedded in the pavement. But neither showed where cyclists and walkers came from, or where they were going, and they only represented a short window of time. For city planners, Strava data is like having a counter on every street corner, all the time.

In February, Oregon’s Department of Transportation (ODOT) became the first customer for this data, which is branded Strava Metro and was officially launched as a service in May. Since then, Strava has contracted with planning departments in England, Scotland, Australia, and Florida, among others. Releasing this data, like any big data, rightly presents privacy concerns. According to the company, the data is delivered to clients in anonymous GIS (geographic information system) format. “All we’re doing is choosing a street network map and seeing how many people are on that street minute by minute, and seeing which direction they’re going in,” Kitchel says. “We’re not identifying anyone.” Heydendael, for one, doesn’t mind his data being used to make safer streets for cyclists. “I think it’s great,” he says. “It’s a really interesting glimpse of human behavior.”

Margi Bradway was the planner at the ODOT who first saw Metro’s potential. “When we started looking at the heat-maps, we could see patterns,” she says. “You’d see people riding a bike lane and then jumping through a park to get to the next street, instead of going through a busy intersection. Or you’d see cyclists on one side of the road choosing to go against traffic, because there was no shoulder on the correct side. You’d see the streets and intersections that weren’t serving cyclists’ needs.”

Bradway is now at the Portland Bureau of Transportation, trying to improve the cycling infrastructure in one of the most bike-friendly cities in the U.S. There were zero bike fatalities in Portland last year, even though something like 18% of trips are taken by bicycle. Portland and ODOT are using 2013 Strava data for research purposes to see how well it correlates with the entire population of cyclists. It’s already proving useful on a pilot project on U.S. Route 26, which goes from Portland to Mount Hood. Cars regularly veer off this road, so ODOT was considering installing rumble-strips in the shoulder. But when Bradway checked the Strava data, she saw that certain sections of the road are popular with cyclists, who would be impeded by a rumble-strip. Now they’re looking at other alternatives, like lighting and signage, and rumble-strips only on the sections rarely used by bikers.

The road building industry has been slow to incorporate big data into its planning processes, but that’s changing. In November, the American Road and Transportation Builders Association (ARTBA) is holding its annual conference, TransOvation. This year’s theme is big data. “The more information we as road builders have, the better,” says Beth McGinn, ARTBA’s director of public affairs. “Using tools like this [Strava Metro] is something we would embrace.”

That’s good, because human lives hang in the balance, especially in places like Orlando, Fla., which was ranked by Smart Growth America as the most dangerous place to be a pedestrian. The roads and neighborhoods there were developed in the car-centric post-war boom. “Now people would rather get in their car to go two or three blocks, which is rather sad,” says Gabriella Arismendi, a transportation planner for MetroPlan Orlando. Arismendi began sifting through the Strava data earlier this year; she’s now sharing it with surrounding municipalities. “Let’s see what kind of improvements we can make,” she says. “Maybe it means more signs, or stronger police monitoring in high crash corridors.”

One critique of using Strava data in a governmental planning process is that maybe it’s only representative of an enthusiastic, well-off demographic. The counter argument is that anyone who rides a bike regularly knows where the safest streets are, and Strava is just showing it on a map. “Regardless of my income, I’m still at risk of getting hit by a car,” Heydendael says. “Just like the food delivery guy.”

If you liked this story, you’ll love our new newsletter. Don’t wait—sign up to receive FORTUNE Data Sheet.