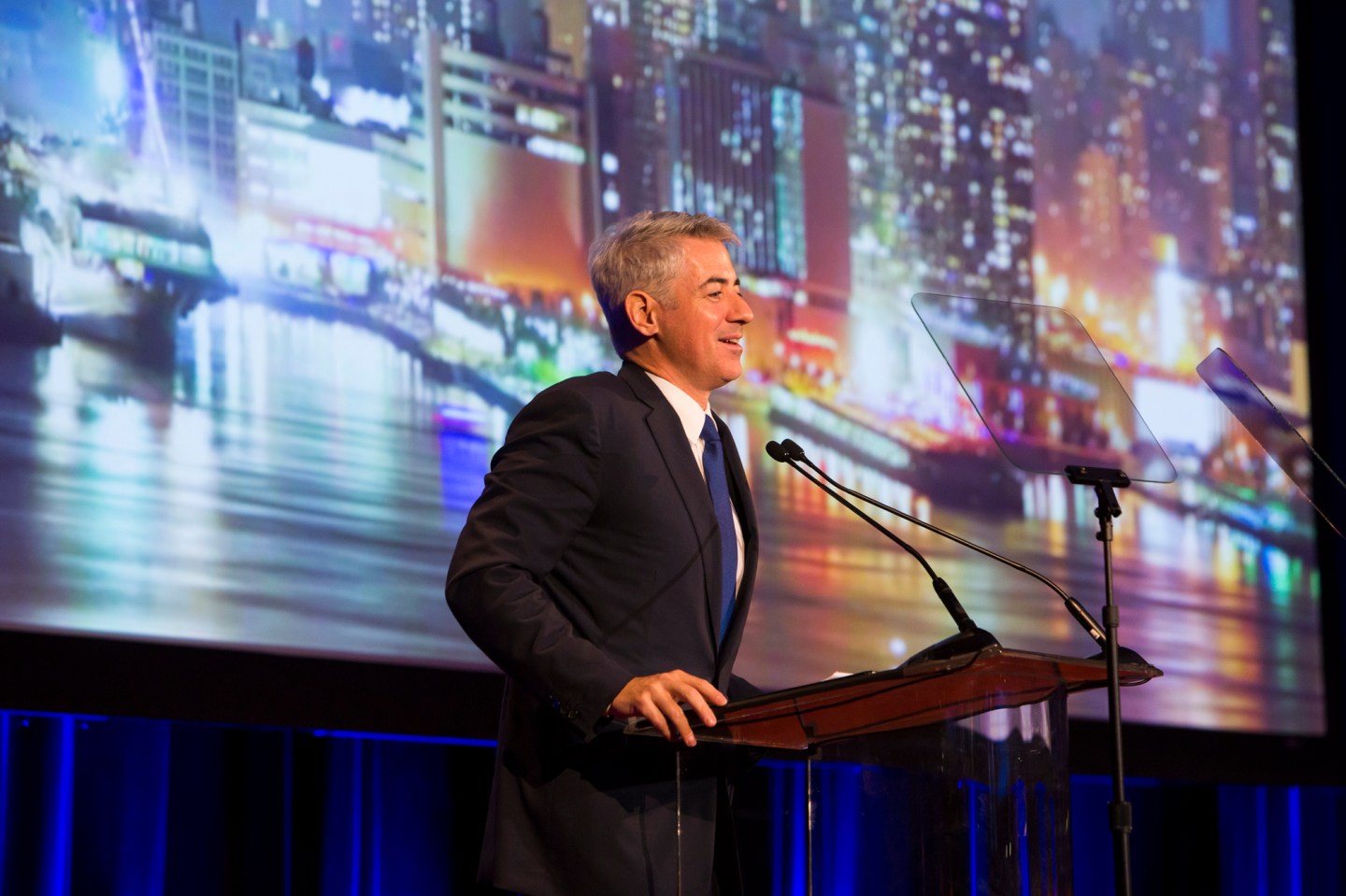 First it was an epic bicycle race. Then it was their battle over Herbalife (HLF) . Now, hedge fund frenemies William Ackman and Daniel Loeb have added a new chapter to their rivalry: Who can raise more for charity?

There is one cause in particular that has sparked a new type of competition between the activist investors—and has actually helped to repair their friendship in the process.

The Challenged Athletes Foundation, which provides sports equipment to those with physical disabilities (wheelchairs for playing basketball and rugby, for example, and prosthetic feet for running marathons), recently honored Ackman at a gala fundraiser at New York City’s historic Waldorf Astoria hotel. The organization’s supporters tend to be avid athletes as well as respected investors. The charity gala’s founder and chairman, Scott Stackman, a managing director of investments for UBS Private Wealth Management, admits he was initially attracted to the organization 10 years ago because it was auctioning off a coveted spot in the Ironman World Championship in Hawaii. (Stackman wasn’t quite fast enough to earn entry to the grueling, by-qualification-only mother of all triathlon races, but has since won it at auction and completed it twice.) A couple of years ago, CAF’s honoree was none other than Loeb, the billionaire CEO of hedge fund Third Point and a dedicated triathlete.

At this year’s benefit, Ackman, founder of Pershing Square Capital Management, assisted the non-profit in raising a record $2.3 million. And he didn’t do it just by leaning on his friends and colleagues for donations. He brought in a couple of surprise—and truly priceless—prizes. During his acceptance speech, he auctioned off a tennis match, followed by dinner, with Andre Agassi, who had suggested the arrangement after Ackman emailed him to solicit a contribution. Ackman, who himself has played Agassi, started the bidding at $85,000, and it quickly sold at that price. He then sold a similar package to play Martina Navratilova for $50,000. (Later, two Ironman Hawaii slots sold for $42,000 apiece.)

The amount raised would be a respectable one-night haul for most charity events, but it was also double what CAF raised at last year’s gala—and nearly twice as much as the $1.4 million total in 2012, when Loeb was honored.

Loeb, however, is hardly admitting defeat. In fact, he takes some credit for the success, since he recruited Ackman to the philanthropy in the first place. “I knew CAF’s mission would resonate with Bill because of our shared appreciation for the value of athletics,” Loeb told Fortune. “As a fierce competitor, I was also confident that he would rise to the challenge of raising more money than I did as the honoree.”

It wasn’t too long ago, of course, that the hedge fund managers were engaged in a well-publicized feud, both in business and their personal lives. They made big, opposing bets on Herbalife—Ackman shorting the stock, while Loeb went long. And they went into full alpha mode in a now-infamous bike ride in the Hamptons, detailed in Vanity Fair magazine. (Ackman apparently overestimated his own fitness, bolting ahead only to squander the lead and barely make it home.)

But Ackman has put all that behind him—and is finally able to joke about the bike trip. Before dinner at the CAF gala, he told Fortune that he agreed to support the athletics-focused philanthropy because, “I can literally mark every stage in my life with sports events,” starting when he was five years old. Then, he paused. “And you know the Dan Loeb bike story of course?” he said, laughing.

The hedge fund manager, currently in the headlines for his joint effort with pharmaceutical company Valeant to take over Allergan, listed off each sports-related milestone in his speech later that evening. He recalled his childhood playing Little League, his first tennis racket (a Jack Kramer wooden one, a gift from his mom), his Harvard days rowing crew on the Charles River (including falling off his seat on the first stroke of a race freshman year, and winning anyway)—and lastly, the Vanity Fair anecdote, “something about my bike ride with Dan Loeb.”

But it was Loeb, Ackman said, who turned him on to CAF, along with their mutual friend Martin Franklin, the founder and chairman of Jarden Corp. “They called me on conference call—and this was while Dan and I weren’t really getting along—but he said, ‘Come on, you’ll be honored, I’ll come on stage and we’ll hug,’” Ackman said. “So sports brings us back together. Actually, we’re friends again.”

There was no hug, as Loeb didn’t attend (though he did sponsor the event). But Ackman—perhaps alluding to the bike misadventure—indicated that sports had also taught him humility, along with confidence. “In my current career the most important thing you need to succeed is confidence, the belief you’re right and everyone else is wrong,” he said. “And humbleness when you’re wrong.”

Ackman was apparently moved by the way sports had clearly changed the lives of the many CAF beneficiaries in attendance. The group included Celeste Corcoran, who had received a pair of running prosthetics from the organization after losing both her legs in the Boston Marathon bombing last year. Alana Nichols, who has won the Paralympic Games in both wheelchair basketball and alpine skiing using equipment from CAF, showed off her Sochi silver medal. And U.S. Navy lieutenant Brad Snyder told the crowd how CAF had encouraged him to pursue Paralympic swimming—over his dreams of working at a hedge fund—after he lost his vision in an explosion in Afghanistan. One year later, he won gold in the 100-meter freestyle. “Brad, I’ll teach you the hedge fund business, you teach me swimming,” Ackman offered.

As a first-time supporter of CAF, Ackman’s one stipulation was that donors get their kids involved as well. One teenager had donated all of his Bar Mitzvah cash to the organization; another had raised $10,000 in a basketball fundraiser. Upon seeing Franklin at the event, Ackman embraced him: “Thank you for making me do this,” Ackman said. Franklin, a hardcore Ironman and Ultramarathon athlete who skis with Loeb and plays tennis with Ackman—and has also invested with them—is trying to convince more of his investor friends to donate. “This isn’t the Robin Hood Foundation gala. This isn’t a big society event,” Franklin told Fortune. “But it’s not a hard pitch.”

For once, even Loeb was congratulating Ackman on this particular investment. “He succeeded brilliantly, ensuring CAF’s work can not only continue but also expand,” Loeb said. After all, when hedge fund managers compete to make money for a good cause, everybody gets a trophy.