With a new website, Dropbox gets down to business 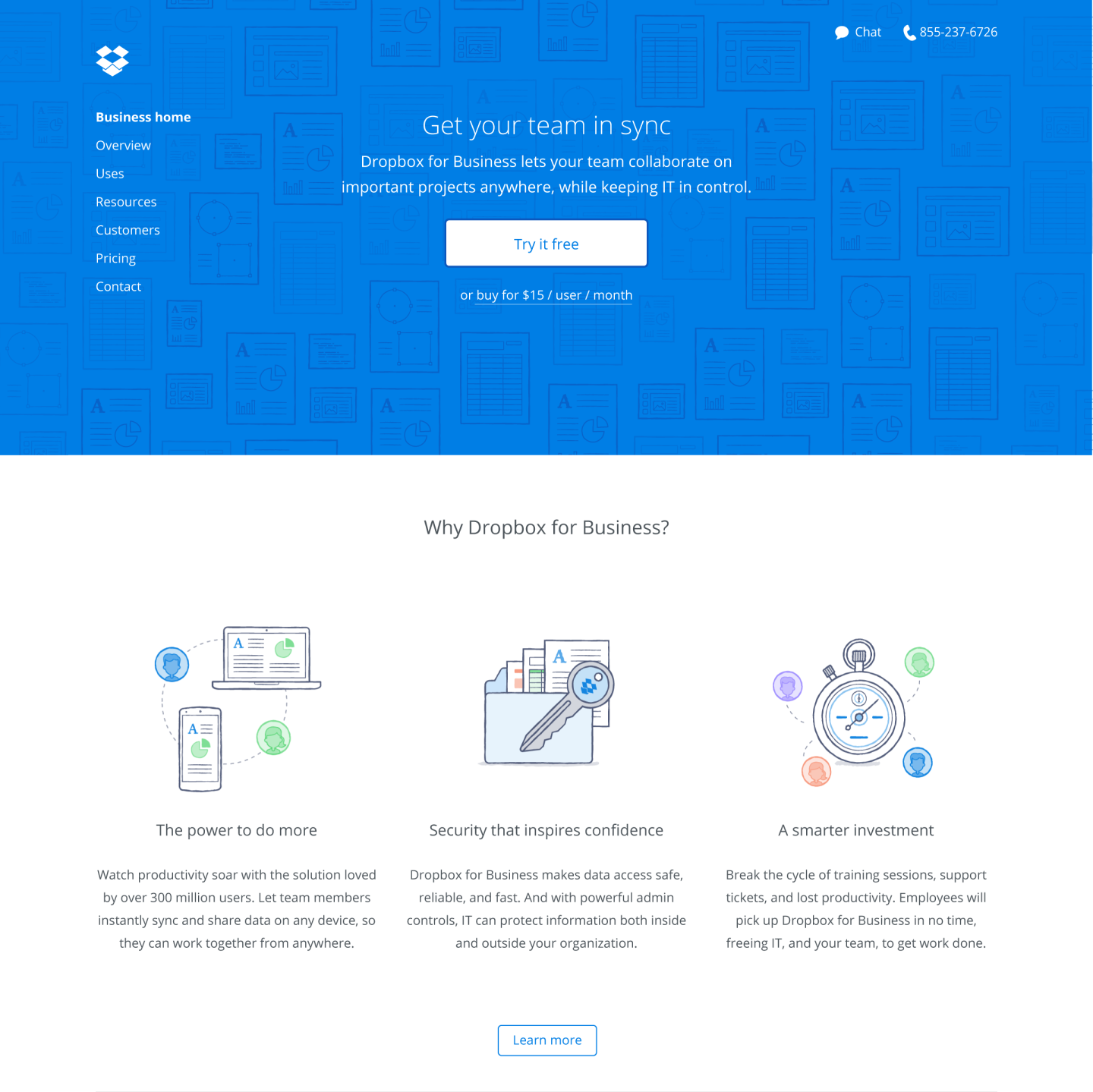 The July 2014 redesign of Dropbox's website is intended to appeal to enterprise customers.
Courtesy: Dropbox

Dropbox, the file-hosting service, wants the world to know that it’s serious about growing its enterprise business. On Wednesday morning, the company unveiled a new website for corporate customers that eschews a white background— it now features a colorful and textured backdrop officially dubbed “Dropbox Blue”—and places emphasis on customer use cases and features it believes enterprises care about, such as security controls and file collaboration.

In short, it looks a lot more enterprise-y—unlike its previous iteration.

“The product has evolved so much,” says Ilya Fushman, head of product, business, and mobile at Dropbox. “We’re putting on a strong outward face to deliver the message to customers.”

The San Francisco-based company, which has now amassed 300 million users, first launched Dropbox for Business in early 2013. In recent months it has gradually added more functions for IT departments, such as the ability to remotely wipe Dropbox folders, file encryption, and two-step password verification. Fushman says a number of other features are in development, and that the company will soon release more tools that developers can use to build on top of its store and sync and share services. (Another logical next step: launching its own market for third-party enterprise applications.)

All of these advances—new website included—show Dropbox’s commitment to its largest corporate customers. Despite the company’s enormous appeal with consumers, and the fact that many customers use it in a work environment with or without their IT department’s blessing, the company is relatively new to the enterprise business. Competitors like Box, Accellion, Alfresco, and Egnyte and larger companies like Citrix (CTXS) and EMC (EMC) have targeted corporate customers for several years. Some have made considerable headway with the largest corporations: Box, for example, recently snagged a whale of a customer: General Electric (GE).

The market research firm Gartner, which recently released its “Magic Quadrant” for enterprise file synchronization and sharing, classified Dropbox as a “challenger” and not a “leader.” (To be fair, it has some impressive company—other challengers in the space, according to Gartner, include Microsoft (MSFT) and Google (GOOG).) Though millions of individuals already use Dropbox in the workplace, the company’s offering has some weaknesses when it comes to using it in an enterprise context. “Enhanced security features, such as content-aware data loss prevention, built-in DRM encryption, HIPAA and FISMA certifications are missing,” Gartner writes in a recent report.

But Dropbox’s service continues to shine in its simplicity and ease of use—a feature the company has very strategically extended from its consumer business to the enterprise side.

“The implementation of it was very, very simple and something that we found very easy to introduce to people,” says Gavin Cuneo, chief financial officer of Valiant Entertainment, a comic books publisher and Dropbox customer. “When we work with a new artist we don’t have to establish any details, we can do it [get them set up on Dropbox] very quickly and very easily.”

Dropbox’s redesigned website appears to have preserved its simple appearance. (And, thankfully, doesn’t include any stock photos of random businesspeople staring at their computers.) What remains to be seen is whether or not the product can retain its ease-of-use and consumer appeal even as the company adds more functions and controls for IT administrators.

Despite an increasingly crowded space, Dropbox has a significant head start thanks to its consumer customer base. It’s a big part of the reason the company is viewed as a “challenger.” Making the leap to “leader,” though, may require more than just a signature shade of blue.

The company insists that’s just the beginning. “We want [corporate] customers to be able to use the site,” Fushman says. “But this is not just about a new website.”

Correction, July 9 2014: An earlier version of this article misstated Gartner’s categorization of Microsoft and Google. They are considered “challengers.”