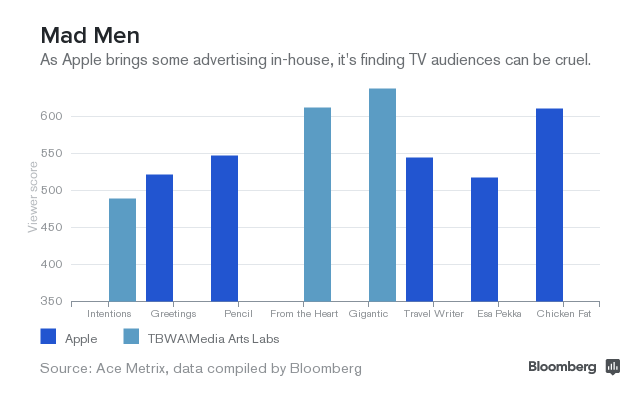 I couldn’t quite put my finger on what bothered me about the Ace Metrix chart Peter Burrows used to support Apple Is Still Searching for Its Inner Don Draper, posted Monday on Bloomberg.

But Ken Segall saw the problem right away. “Ace’s type of analysis,” he wrote Thursday in Analyzing Apple ads to death, “is the reason why so many companies, usually the bigger ones, begin to churn out drivel.”

Segall, for those not steeped in Apple (AAPL) lore, was the creative director at TBWA\Chiat\Day who came up with Apple’s “Think Different” campaign and sold Steve Jobs on the idea of calling Apple’s 1988 Bondi Blue computer “iMac.” (See The man who put the i in iMac.)

This week he’s coming to Apple’s defense against TBWA. Or rather, in defense of the in-house agency whose Apple ads scored lower than TBWA’s Apple ads in the so-called Ace Score.

“What exactly is the ‘Ace Score’ of which they speak?” Segall asks rhetorically. “If you have the stomach,” he writes, “read on.”

“The Persuasion rating is based on the interactivity of six data elements – Desire, Relevance, Likeability, Attention, Information and Change – automatically captured and analyzed for each ad. Watchability measures the engagement that a person has with the ad. Watchability and Persuasion interact to create the Ace Score.”

“This is the kind of language,” Segall writes, “that gives talented people nightmares, because it often gives ammunition to people who aren’t particularly good at judging creative work.”

By Ace’s criteria, Microsoft’s 2012 “Dancing” ad for the Surface tablet “flipped the ‘Mac vs. PC’ campaign on its head introducing intense aspiration among consumers, as evidenced by very high ‘change,’ ‘desire,’ and ‘attention’ Ace scores.”

By contrast Apple’s “Misunderstood”  — a 2013 ad about a teenager surreptitiously filming his family’s holidays — scored well in ‘likability,’ ‘attention’ and ‘relevance’ but got a mediocre Ace rating because it was was judged to be lacking in information.

“Steve didn’t tolerate that kind of thinking,” Segall writes. “Apple’s history of great advertising is the validation of his approach.”

That said, Segall agrees with Ace’s conclusion that recent in-house efforts — particularly the “What Will Your Verse Be?” series — haven’t been quite up to snuff.

“But trust me,” he adds, “that’s just coincidence.”