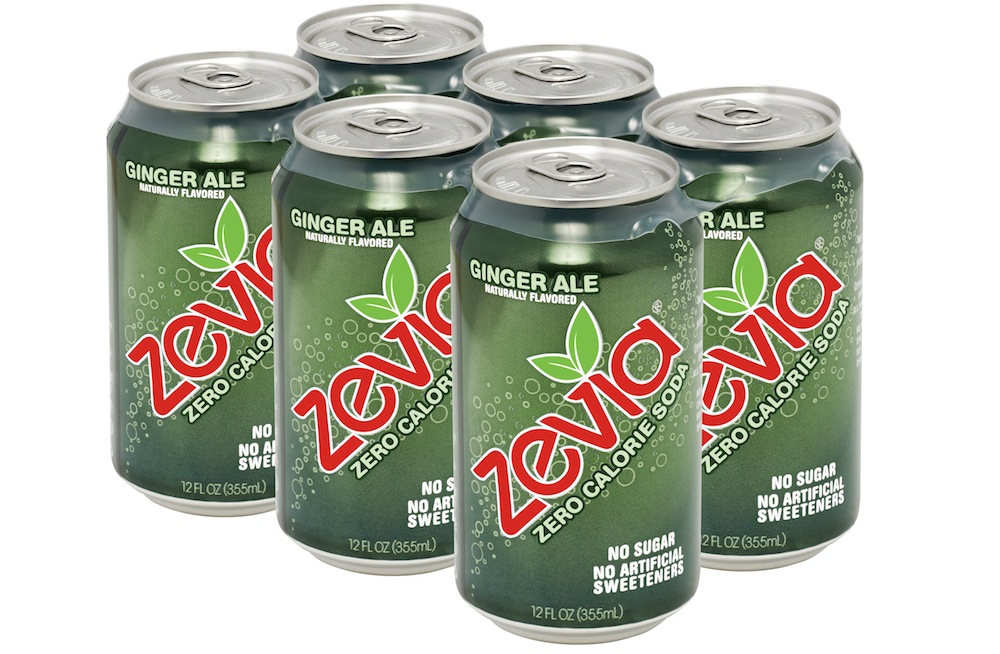 As consumers grow sweeter on sugar-free and aspartame-free sodas, one upstart is trying to build a big head start on beverage behemoths Coca-Cola (KO) and PepsiCo (PEP) in the growing market for naturally sweetened soft drinks.

Zevia, based in Culver City, Calif., produces the only zero or low-calorie carbonated soft drink with rising U.S. sales among the top 20 brands. Its secret? It uses stevia, a leaf, to sweeten its soft drinks naturally at a time when leading diet soda brands such as Diet Coke and Diet Pepsi are getting slammed by a backlash against the use of artificial sweeteners.

In the first half of 2014, U.S. sales of diet carbonated soft drinks fell 7.5%, according to Beverage Digest. In contrast, according to SPINS/IR data, Zevia saw sales rise 67% in the three months ending on May 18 compared to the previous year, despite being more expensive than leading diet soda brands.

Zevia, which offers 15 soft drinks, including cola, root beer, and ginger ale, had sales of about $90 million in the last 12 months, making it a tiny player compared to Pepsi, Coke, and Dr Pepper Snapple (DPS). But that performance has underscored how slowly the industry’s giants have been to adapt to changing tastes.

“As big and as powerful as the big beverage companies are, a lot of the innovation has been by the smaller companies,” Beverage Digest editor and publisher John Sicher told Fortune.

The industry’s giants are taking notice, developing their own similar, though not directly competing, products.

Coke is introducing Coca-Cola Life, a mid-calorie cola sweetened with a blend of stevia leaf extract and sugar, in the United States in September, according to a Beverage Digest report. Meanwhile, PepsiCo is reformulating Sierra Mist with stevia this fall, lowering the sugar content by 20%. And Dr Pepper Snapple is currently testing three naturally sweetened versions of Dr Pepper, 7up, and Canada Dry, with stevia and sugar, in three markets. Food companies are also getting in on the action: this week General Mills (GIS) said it would reformulate its Yoplait yogurt with stevia.

To be fair, much of the big companies’ hesitation comes from the risk of hurting their still high volume diet brands, or fear of customers by reformulating a favorite drink.

“We question whether the major manufacturers will participate meaningfully in this growth without cannibalizing their existing brands,” Wells Fargo analyst Bonnie Herzog wrote in a research note.

But that hesitation has given Zevia, which was founded in 2007 and is held by Long Island-based private equity firm Northwood Ventures, time to build an edge.

The brand, which got a big break when Whole Foods (WFM) started selling it a few years ago, is among the five best- selling soft drink brands on Amazon.com (AMZN) and is available in about half of all U.S. supermarkets, according to Zevia CEO Paddy Spence. It is also a draw among more affluent consumers; the average household income of a Zevia drinker is $60,000, compared to a U.S. average of about $52,000, Spence said.

Despite that success, there is still a lot of work to do before Zevia can really say it has cornered the market. For one thing, it doesn’t sell its products at major retailers like Wal-Mart Stores (WMT) or restaurant chains like McDonald’s (MCD), and it has minimal presence in chains like Target (TGT).

Zevia has begun selling its beverage outside of grocery stores. Its products are sold in the cafeterias of a few Silicon Valley companies and Zevia is a sponsor of Major League Baseball’s Oakland Athletics. But consumers buy 8 to 10 cans of Zevia soda at a time in a supermarket, so retail is its main focus for now, rather than the so-called “single-serve” market at places like movie theaters and sports venues.

“We built the business at the grocery shelf because, frankly, that’s where a lot of the volume purchasing happens,” Spence said. “You have to earn your shelf space and retailers are not willing to take risks—they’re not going to put a product on the shelf unless it has proven demand.”

Zevia’s strong position in the zero-calorie soda area could eventually make the company an acquisition target by one of the big guys, Beverage Digest’s Sicher said. He pointed to how PepsiCo bought SoBe in 2000 and Coke bought Vitaminwater maker Glaceau in 2007 to gain a foothold in beverage growth areas.

Spence declined to say whether Zevia is up for sale but did say he fields inquiries regularly. He also hinted that it would be too soon, anyway.

“We’ve had a phenomenal run so far, but I feel like I am only part way up the mountain,” Spence said, noting that being independent gives Zevia more room to innovate.