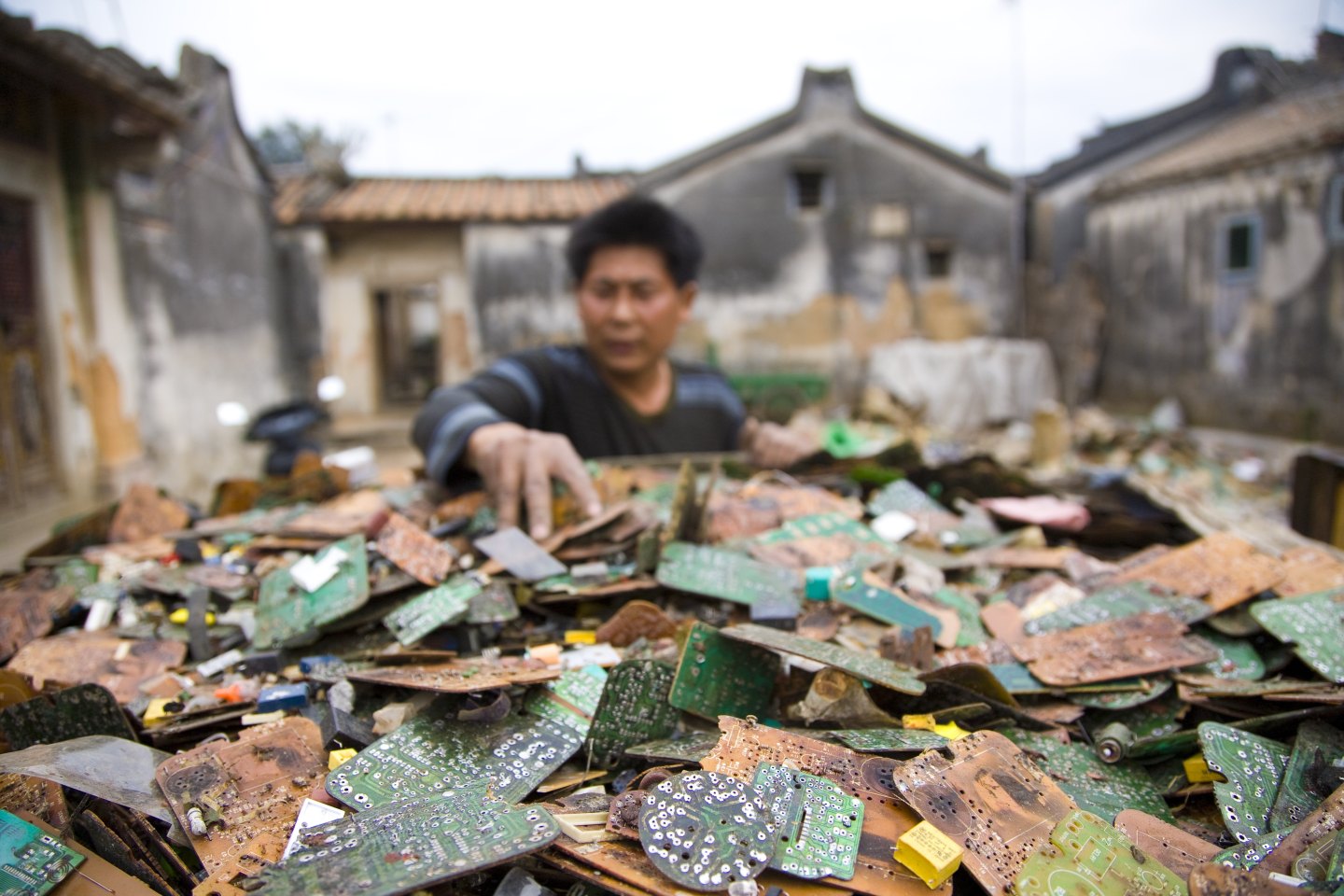 On a recent, rather stormy Tuesday afternoon, former U.S. vice president Al Gore and an assortment of Silicon Valley executives assembled in an unlikely spot—Osceola, Arkansas—to break ground on a promising new venture.

Backed by $35 million in financing, California-based startup BlueOak Resources is building a brand-new facility in this city of 8,000 or so, but it’s not to manufacture a new high-tech gadget. Quite the opposite, in fact: BlueOak’s new operation will be what it calls the nation’s first “urban mining” refinery dedicated to recovering valuable metals such as gold, silver, copper and palladium from the growing mountains of e-waste currently threatening to overwhelm the planet.

Although between 7% and 10% of the world’s gold and 30% of the silver produced goes into electronics, only 15% of the 50 million tons of e-waste created globally each year undergoes any recycling, Bradoo said. Instead, the vast majority of devices are dumped in landfills or exported to countries where e-waste is hand-picked over open fires.

The city of Guiyu, China—widely considered the world’s e-waste capital—receives some 4,000 tons of the stuff per hour. It also has the highest-ever recorded level of dioxins, and 90% of its residents have neurological damage, Bradoo said. “Not only is it a humanitarian disaster, but when we looked at the value contained in e-scrap, it was shocking,” she added.

With support from the Arkansas Teachers’ Retirement Fund, a consortium of European and domestic investors, and the Arkansas Development Finance Authority, BlueOak’s new refinery will process 15 million pounds of electronic scrap per year initially, rapidly expanding from there. Production will begin by the end of 2015, bringing 50 technical jobs to the area. Kleiner Perkins Caufield & Byers is one of BlueOak’s major investors.

E-waste is the fastest-growing component of the municipal solid waste stream, and given all the precious metals, valuable plastics and recyclable glass electronics contain, “the fact that these are being routinely discarded makes no sense,” Hershkowitz said.

Indeed, roughly 10 ounces of gold can be extracted from every ton of printed circuit boards, Bradoo said; you’d need to process 100 tons of gold ore or more to get the same amount.

More to the point, “for every ounce of gold that has to be mined in the field, we produce 30 tons of waste” including mercury and cyanide, Hershkowitz said. “Compare that with recovering an ounce of gold from electronic waste—you’d eliminate that gigantic ecological burden.”

There are, of course, U.S. companies already out there that specialize in refurbishing and recycling used electronics—Sims Recycling and ECS Refining are two larger examples. Typically, though, such companies dismantle unrefurbishable devices either manually or with automated shredders to recover their aluminum, steel and plastic but ship the circuit boards to smelters overseas, Bradoo said.

It’s those circuit boards where most of the high-value metals reside, she added. In order to reclaim them in a sustainable way, BlueOak’s facility will take the boards, pulverize them further and put them through a high-temperature plasma-arc furnace.

‘Value recovery from every part of that chain’

Europe has long been ahead of the United States in its e-waste solutions, thanks not just to government mandates and an emphasis on recycling but also to infrastructure already in place there.

“They had domestic secondary smelters that had the capital and the capability to redirect some of their capacity toward e-waste,” Bradoo said.

Even there, though, “there are no facilities we’re aware of that are dedicated to recovering precious metals from electronic scrap,” she said.

Yet while BlueOak’s urban mining refinery may be “exactly the kind of facility that we need from an ecological perspective,” some key economic realities will have to be overcome, NRDC’s Hershkowitz said.

“The challenge here is going to be getting the electronic waste to the facility, because right now only a fraction of electronic waste is effectively recovered for recycling,” he added. “From an economic perspective, we need government requirements, as they have in Europe, that obligate the consumer products companies to participate in funding the infrastructure to recover these materials for recycling or refurbishment.”

Initially, BlueOak will rely on suppliers that are already collecting and dismantling e-waste, but “our hope is that by creating more value in that value chain, that will promote the front-end recycling,” Bradoo said.

The automotive industry is an inspiring model, she noted, with a recycling rate of about 95%. “That’s because you have value recovery from every part of that value chain,” she said. “An entire industry has focused on ensuring that there’s recycling.”

Alternatively, much the way deposit-refund systems have been used successfully to encourage container recycling, it’s possible a similar scheme could be applied to electronics, she said.

Either way, “we want the entire value chain to grow and to create an ecosystem that supports the overall recycling and recovery of as much value as possible from electronics so we don’t think of it as a waste stream,” Bradoo explained.

‘We need to see real leadership’

Approaches like BlueOak’s urban mining refinery “have the potential to be an important part of the solution, to recycle the materials embedded in these devices, reducing the demand for virgin materials and the energy needed to produce them,” said Gary Cook, a senior IT analyst with Greenpeace.

Greenpeace also wants to see more robust efforts from the electronics sector, Cook said, such as stronger take-back programs and a commitment to using recycled materials in electronics products.

But it starts at the top. “What we also need to see is real leadership from electronics manufacturers in creating products that are designed to have a longer life,” Cook said, citing the example of modular mobile phones such as Phonebloks and Project Ara, “and not designed for the dump in two to three years.”