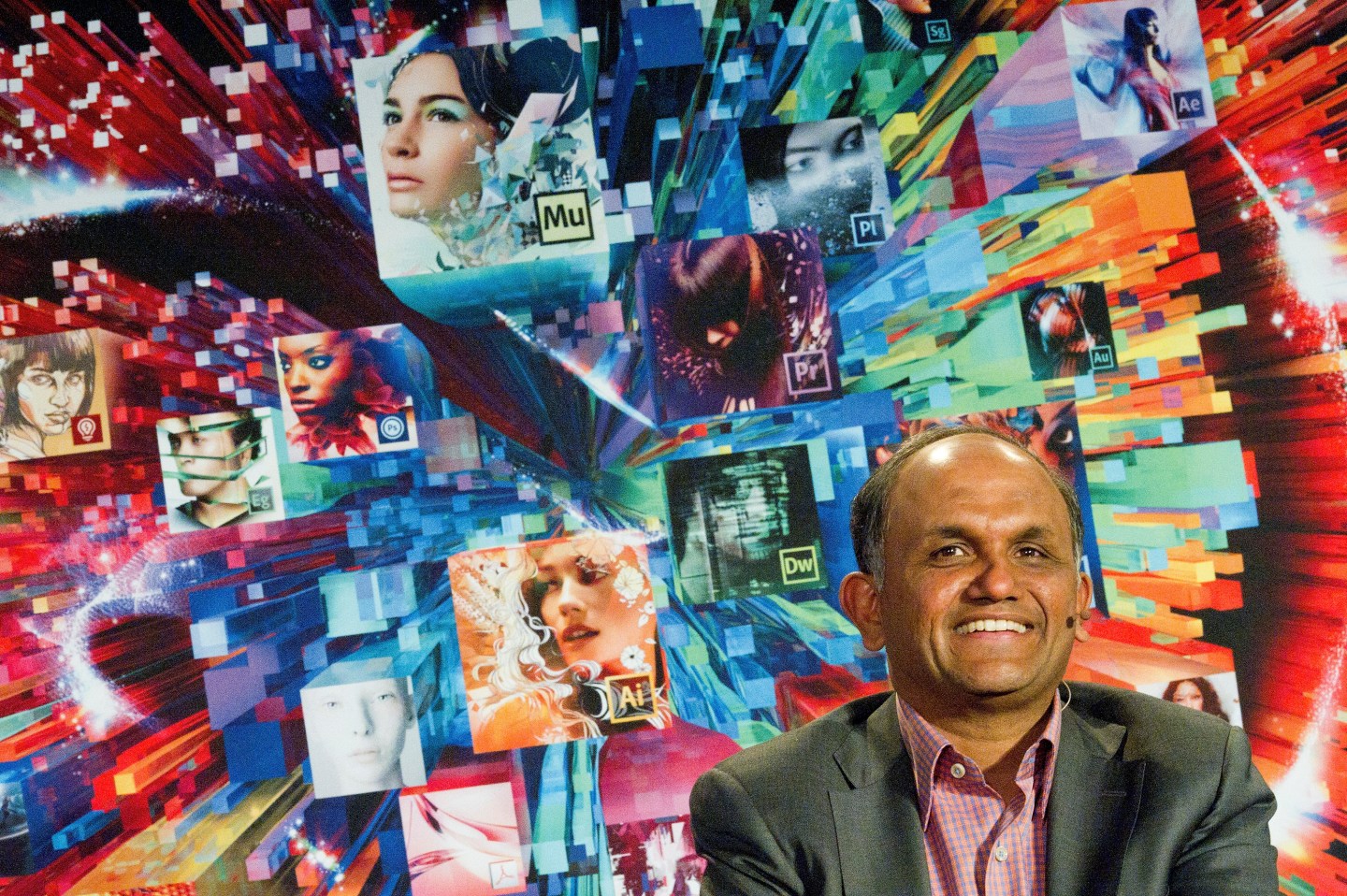 In October 2011, Adobe Systems (ADBE) announced that it would “radically” rejigger its flagship software package for creative professionals, switching to a subscription-based model that would deliver its tools online, rather than in shrink-wrapped cardboard boxes.

The immediate reaction was mixed. Some very vocal customers took to Twitter and other social media outlets to express their rage. (Apparently not everyone wants to pay their software provider every month for all of eternity.) But Adobe’s senior management, led by CEO Shantanu Narayen, were convinced this was the way to go, and that long-term gains would outweigh the short-term challenges.

Nearly three years later, after several quarters of sales declines, Adobe’s transformation is showing the early signs of success. On Tuesday the company announced its results for its fiscal second quarter 2014 , which included better-than-expected profit and revenue, partly driven by subscription sales of its Creative Cloud software package.

For the quarter ended May 30, Adobe reported a profit of $88.5 million, up from $76.5 million a year earlier. Revenue, meanwhile, increased nearly 6% in the same time period, to $1.07 billion. Notably, the Photoshop-maker says it now has 2.3 million Creative Cloud subscribers, up 25% from last quarter. And slightly over half of the company’s revenue is now recurring, a.k.a. coming in from monthly subscriptions, versus traditional box licenses. (It’s important to note that this revenue mix includes sales of Adobe’s other line of cloud-based products: digital marketing tools.)

In short, Adobe’s transition to the cloud appears to be going pretty well.

“We’re way ahead of where we thought we’d be,” Mark Garrett, Adobe’s CFO, said on a call following the company’s earnings announcement earlier this week. “We’ve shown people the value of Creative Cloud. It’s not just a ‘do I buy or lease the car’ kind of thing. This is a completely different product.”

To that end, on Wednesday Adobe unveiled an overhauled version of its Creative Cloud suite of products, which now includes new mobile apps, hardware (a digital pen and ruler the company’s been working on for several years) and the official launch of a cheaper photography plan that costs $10 per month. There’s also a software developer kit for developers to build on top of these new products.

“In the old days it was about protecting the I.P.,” says David Wadhwani, SVP and general manager of Adobe’s digital media division. “Now we’re building a platform as a service.”

Opening up and transitioning to a subscription-based model of delivering software is no easy feat. The company’s move irritated customers who didn’t like the idea of phasing out the traditional box version of Adobe’s software, which they had been using for years. The move also caused internal upheaval, as the company had to transition its salespeople to a different compensation model. (Subscription models are more predictable but bring in less money upfront.)

Adobe’s management team remains convinced that a bold and fast move to the cloud was the way to go. “Balancing the old and the new restricted how much innovation we could do on the new,” Wadhwani says.

Of course, educating Wall Street on the shift was another hurdle. Back in 2011 Adobe spent a full day with analysts, explaining the move to subscriptions and how that would change the model by which to value Adobe’s future growth.

“We’re now entering a phase were investors are learning to appreciate what is good versus bad subscription businesses,” Mike Volpi, a partner at venture capital firm Index Ventures, said at a recent panel discussion on the “subscription economy.” (Index is not an investor in Adobe.)

Adobe still has its share of hurdles. For instance, its offering of a lower-end photography subscription for $10 a month has lowered its average revenue per user rate (ARPU), a metric investors closely watch. But CFO Garrett says the true health of the business should now be measured by annualized recurring revenue (ARR), not ARPU. The company is currently focused on switching customers to the subscription model, he says; the increase in ARPU will come later.

Already, about 20% of the current Creative Cloud customer base is new to Adobe. That means the move to the cloud has opened up new market segments for the company, even as some customers have revolted. And of course, Adobe has another fast-growing side to its business—digital marketing revenue rose 16% to $330 million in this most recent quarter, and the company expects its marketing cloud to grow about 20% this year.

“No matter how you look at it we’re really excited about the adoption that’s happening on the cloud,” Garrett says.

Apparently, so is the Street. On Wednesday morning, the day after the company announced better-than-expected earnings and subscriber numbers, Adobe’s shares rose to record highs. Of course, Adobe’s “transformation” is far from complete. The company needs to keep growing its customer base and revenue per user to show that its strategy is paying off. But compared to other companies’ slow move to the cloud, Adobe seems to have gotten ahead of the curve in very little time.