5 Fortune 500 stocks that could lift off 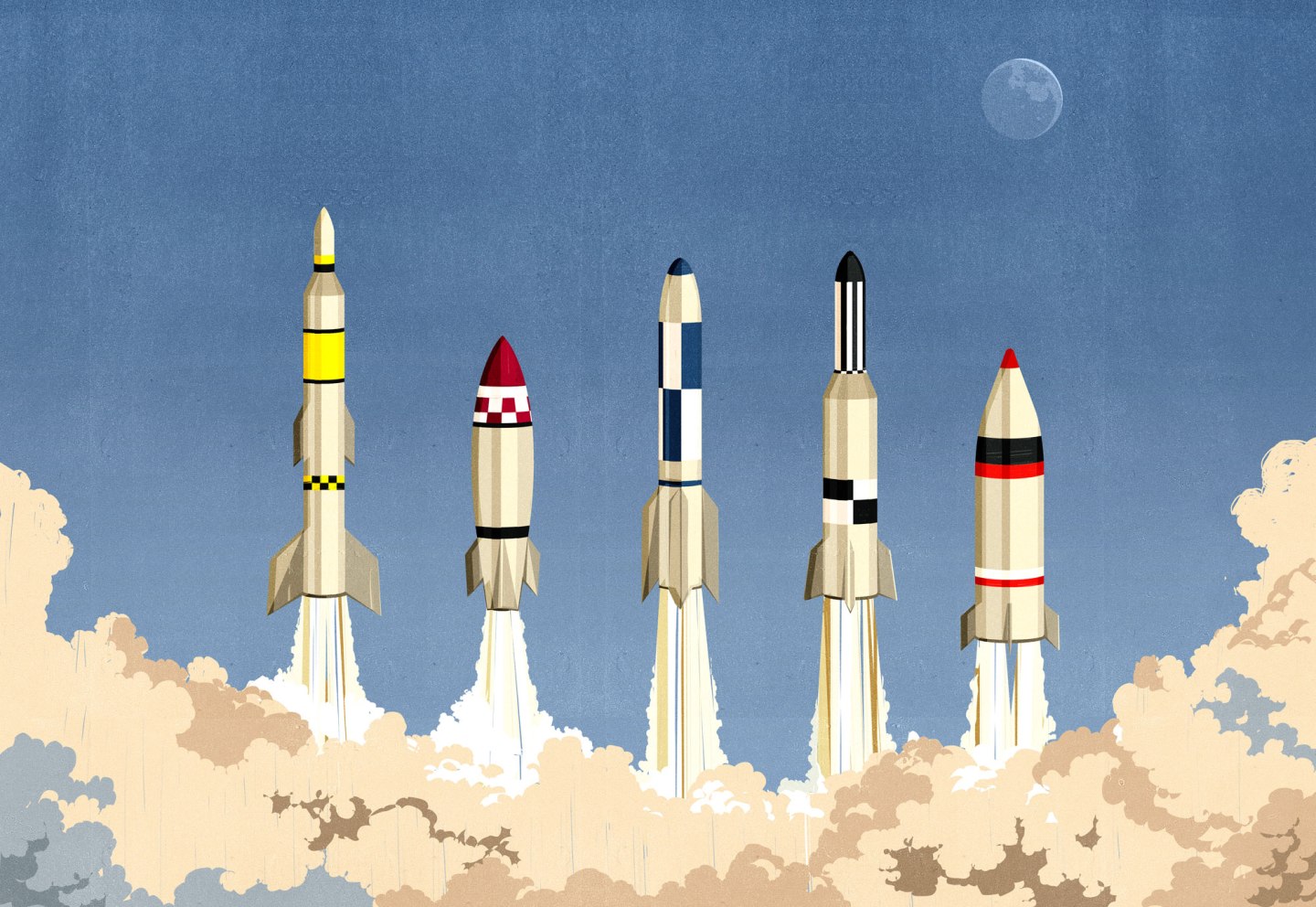 Bigger is better. It’s one of America’s defining creeds (though admittedly less noble and soaring than, say, “All men are created equal”). The Fortune 500 celebrates that type of sheer mass and throw weight — and the myriad accomplishments it takes to nurture a company to world-beating scale. But as much as inclusion on the Fortune 500 testifies to years of stellar success, nobody would confuse it with an indicator of future stock performance.

Still, it’s only natural to wonder which among this august assemblage has a stock primed to take off. We set out to answer that question, one that is particularly difficult these days, given the recent giddy heights of the stock market and the multiyear ascents that many big-company stocks have enjoyed.

We started with a traditional value screen, seeking out Fortune 500 companies with superior performance that were trading at discount prices. In this case, that meant companies with a dividend yield of 2% or more whose expected earnings per share (EPS) growth and return on equity exceed the median for the 500, but whose price/earnings ratio falls below it. That simple but powerful sorting eliminated 490 of the companies on the list.

From there, we grilled fund managers and analysts, tossing out a few candidates whose results were skewed by earlier underperformance, such as communications and IT company Harris, which is expecting EPS to bounce 400% after a couple of dismal years. We also scratched stalwarts such as R.R. Donnelley & Sons and Lockheed Martin, which have enjoyed scorching stock runs and now seem due for a slowdown, according to analysts. The result: Five undervalued stocks whose potential just might surprise you.

We know what you’re thinking: Why should I invest in Amazon.com roadkill? Once left for dead, Best Buy (BBY) was a stealth market superstar in 2013. Shares of the electronics retailer soared 253% during the calendar year, only to plunge 35% this year after the company fell far short of its holiday sales goals. Michael Levine, manager of the $6 billion Oppenheimer Equity Income Fund, says his fund bought shares about a year ago, before the price doubled, and scooped up more when “the stock fell out of bed in January.” Levine says he’s sticking with it because the company’s new management is finally giving Amazon (AMZN) a run for its money and no longer faces brick-and-mortar competition from the likes of Circuit City, which has joined others in the crowded big-box graveyard in the sky.

Best Buy is now managing an unlikely feat: It’s offering prices comparable to Amazon’s yet preserving its profit margins, thanks to cost-cutting and effective partnerships with manufacturers, says Tom Kolefas, manager of the $4.9 billion TIAA-CREF Mid-Cap Value Fund, which owns shares of Best Buy. At the same time it’s fulfilling online orders with products shipped from its stores, which means delivery at the speed of Amazon and reduced inventory costs.

Despite their 2013 run, Best Buy’s shares still trade at a discount: just 11.5 times estimated next-12-month earnings, with a dividend yield of 2.7%. “It’s being priced as if it’s going out of business, and it’s not going out of business,” Kolefas says. He points to the $1.3 billion in cash on Best Buy’s balance sheet — more than enough to sustain it even if it stumbles again at Christmastime: “We look at stocks that have staying power, and it has staying power.”

If you had to distill seven years of market sentiment on Blackstone (BX), it would boil down to Great firm, terrible stock. It’s a paradox: How could a company that, since going public in 2007, has tripled the money it oversees, tripled its dividend (it now yields 6.4%), and launched several successful new business segments possibly be trading lower than it did when it made its debut? That’s a head-scratcher for Blackstone fans. “It’s an extraordinary dividend yield on an extraordinary company at a very, very low multiple, which is almost impossible to find — which is why it’s our largest holding,” says Mitch Rubin, chief investment officer of the $3.2 billion RiverPark Funds.

Once known just as a private equity firm — a category that is still new to stock market investors — Blackstone has dramatically expanded its real estate, credit, and hedge fund offerings. The company’s assets under management ballooned from $88 billion at its IPO to $272 billion, as pension funds and other institutions have increasingly turned to alternative investments. Blackstone typically earns around 1% just to oversee those assets (which investors commit to for as long as a decade), plus up to an additional 20% of the increase in their value.

“By almost any measure, the company is more relevant and more valuable than it was at the IPO, and it’s 10% cheaper,” Rubin adds. Why? The “big caveat,” he says, is Blackstone’s funky income statement. The company is required to adjust the paper value of private equity assets each year, which causes reported profits to swing wildly back and forth from black to red and back. Those swings, which can exceed $1 billion, tend to spook investors, accounting for the company’s bargain 8.5 forward P/E. That said, those are only paper valuations. Most of Blackstone’s funds have a 10-year lifespan, and the firm’s funds rarely turn in losses. “We’re perfectly comfortable buying more of it,” Rubin says. And TIAA-CREF’s Kolefas notes that it’s an efficient way for investors to diversify and benefit from so-called alternative investments.

America’s efforts to eat healthier, combined with a few headline-grabbing moves to restrict soda consumption, have taken some fizz out of soft-drink stocks. Dr Pepper’s (DPS) shares have gone flatter than those of Coke or Pepsi. The company is smaller than its rivals, and investors seem to view it as more vulnerable.

But Dr Pepper has actually increased profits more than Pepsi (PEP) or Coke (KO), says Citigroup beverage analyst Wendy Nicholson, and it boasts a 2.9% yield. “I characterize Dr Pepper as a good house in a bad neighborhood,” she says, pointing out that the company’s fastest-growing category is iced tea, followed by juice. Dr Pepper is also developing a low-calorie natural sweetener to use in its pop, as consumers have soured on sugar as well as artificial replacements containing aspartame. In addition, the company makes revenues by distributing health drinks for other manufacturers.

Despite projected EPS growth of 13.5% in 2014, Dr Pepper trades at 16.4 times forward earnings, a discount to its competitors. “It has better growth prospects than either Coke or Pepsi,” says Ragen Stienke, who manages $4 billion for Westwood and has owned Dr Pepper Snapple stock for more than five years. Coke and Pepsi have long been ubiquitous worldwide; Dr Pepper has plenty of room to grow. The company has expanded in the U.S. and into Latin America, and could venture farther. Besides, Dr Pepper tends to buy back a lot of stock, and operates in “a very shareholder-friendly manner,” Stienke adds.

Just when the world was convinced that all fans of Mario Kart had switched to playing Candy Crush on their phones, a long-awaited new generation of living-room videogame consoles hit the market in November — and flew off the shelves. In six months Sony (SNE) sold more than 7 million PlayStation 4 units, while Microsoft (MSFT) sold 5 million of its Xbox One, records — unexpected ones — for both.

That’s good news for GameStop (GME), which had suffered because of an eight-year lag since the last blockbuster consoles were released. “You definitely want to own the stock at the beginning of the cycle,” says Anthony Chukumba, an analyst for BB&T Capital Markets. The “sweet spot,” he says, occurs about three years after a console launches, when consumers load up on games. That’s where GameStop earns much higher margins — and even more when it resells used games. In the meantime, GameStop has added an estimated 10 percentage points of market share. In a market where manufacturers dictate prices, the physical retailer is winning by stocking more goods and offering irresistible loyalty perks. “They’re the leader, with a bullet,” says Chukumba. “It’s not even close.”

Despite that (and a current yield of 3.7%), GameStop trades at a 9.7 forward P/E. The world wrongly views the retailer as “the next Blockbuster,” contends Royce Funds’ Jay Kaplan, who recently stocked more GameStop shares in four of his five funds. The company has diversified into mobile devices and repairs, and has begun selling digital game downloads. “Ultimately, they really do understand that the idea of someone walking into a store and buying a game is going to end,” Kaplan says. “The disconnect is the market thinks that’s tomorrow, and that’s not going to happen for a while.”

The paper business is probably the last place that investors would expect to find growth in an increasingly electronic world. But cereal boxes haven’t gone digital yet, and more and more cardboard packages are arriving on doorsteps, as people increasingly order just about everything online. International Paper (IP) is the biggest maker of those boxes in an industry that has recently consolidated to only a few major players (especially since IP acquired a competitor in 2012), and it is becoming more profitable as it trims and jettisons waning businesses, like white paper and newsprint. The company is expected to achieve 15% annualized EPS growth over the next five years.

“The paper industry historically has been a lousy industry — it never returned capital to shareholders,” says Oppenheimer’s Levine. “We like IP because it’s in a lousy industry that has fundamentally changed.” International Paper has gotten savvy about shutting down paper mills to control supply. It raised its dividend from 10¢ a year in 2009 to $1.40 this year — a yield of 3.2% — and also bought back stock. Cardboard demand in the U.S. has slowly picked up as the economy inched back.

IP has sought further growth in emerging markets like India and Russia. Unfortunately, that strategy has singed the company lately; its Russian assets dropped precipitously because of turmoil in Ukraine, contributing to a $95 million loss in the first quarter. Still, that bad news has made the stock a bit more affordable for investors (the stock now has a forward P/E of 12), and the international investments will eventually pay off, according to analysts. Says Levine: “Clearly, demand in those markets is better than it is in the U.S.” Paper products, these days, can bring real returns.