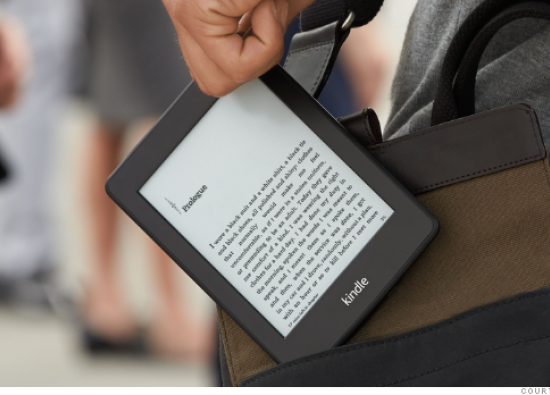 Jeff Bezos may be tight-lipped when it comes to talking numbers, but the Amazon (AMZN) chief executive made it clear where the real value of the Kindle lies for his company: “We want to make money when people use our devices — not when people buy our devices,” he wrote to shareholders in April.

And buy they do. Given that Kindle owners spend $443 more a year than their non-Kindle-owning counterparts, according to data released last week by Consumer Intelligence Research Partners, it makes a lot of business sense for Amazon to focus on increasing their value to Kindle users.

That’s where MatchBook comes in. The service beefs up Kindle offerings by bundling print and e-book purchases at a discount. Since Oct. 29, customers can download Kindle versions of print books they bought on Amazon dating all the way back to 1995 for $2.99 or less — in some cases even getting them for free.

MORE: Owning a Kindle boosts spending on Amazon by $443

MatchBook is part of Amazon’s larger strategy to rope in loyal customers by adding perks to existing purchases. “They keep the price the same and add a lot more services to your subscription,” says Oliver Wintermantel, an analyst for ISI Group. Matchbook is similar to AutoRip, launched by Amazon at the start of the year, which lets customers stream free MP3 versions of vinyls or CDs they’ve purchased. Amazon Prime also follows this give-them-more-than-they-signed-up-for strategy, offering perks like free movie streaming to members who originally signed up for only free shipping. “It creates loyalty to the retailer,” Wintermantel says.

Amazon isn’t breaking new ground here. The concept of bundling print and e-books has been around since e-books came on the market. O’Reilly Media, which focuses on technology books, has been offering such bundles for years. But when a big player like Amazon jumps in the game, it’s a different story. A recent MatchBook search on Amazon brought up more than 96,000 results — a tiny fraction of its total listed titles, yet far more than any other bookseller out there.

But why would customers want the e-book version of a book they already own, and vice-versa?

“Data has suggested that people don’t do a complete switch over. People who read e-books also read print books,” says Mike Shatzkin, founder and CEO of The Idea Logical Company, a publishing consulting firm. “There’s a market for people who want the print and e-book, but aren’t willing to pay the full price for both.”

According to Amazon, bundling print and digital books has been one of the most frequently requested features by customers.

From a business perspective, the move gives Amazon a clear competitive advantage. Let’s say you bought Barbara Kingsolver’s novel The Poisonwood Bible on Amazon as a gift for your mom four years ago, and now you want to read it on your tablet. You could buy the book on iTunes for $11.99, but because you already purchased a print copy, you can download a Kindle version for $2.99. For $1.23 more than the iTunes price, you can get both the print and e-book on Amazon.

AutoRip increased Amazon’s vinyl sales by 66 percent since it launched at the start of the year. For Matchbook, however, the limited selection of titles offered and relatively low number of readers interested in both print and e-books likely won’t move the needle much on sales, Shatzkin says.

Though publishers and booksellers tend to get into a huff anytime Amazon does something to change the direction of the book selling industry, the new service may be good for print book sales, encouraging customers who might not have considered buying a print book to get one along with the electronic version. It is still unclear how authors will fare in terms of royalties.

Many publishers are hesitant to join, but the service could help them sell more books, says David Wilk, owner of book marketing and consulting firm Booktrix. For example, publishers could give new life to a backlist title by offering an e-book version for a lower price. “Why not support the retailer who is going to increase your business?” Wilk asks.

Publishers and authors can think of quite a few reasons. Some worry they could devalue their product by having it sold at a lower price on Amazon. There’s also a hesitancy to give Amazon too much control over titles, which is what Mark Coker, founder of the e-book publishing and distribution platform Smashwords, refers to as a “crush, kill, control strategy.”

Bezos maintains that Amazon’s energy “comes from the desire to impress customers, rather than the zeal to best competitors,” as he told shareholders in April. But if you’re every other bookseller out there, it’s hard not to feel bested.