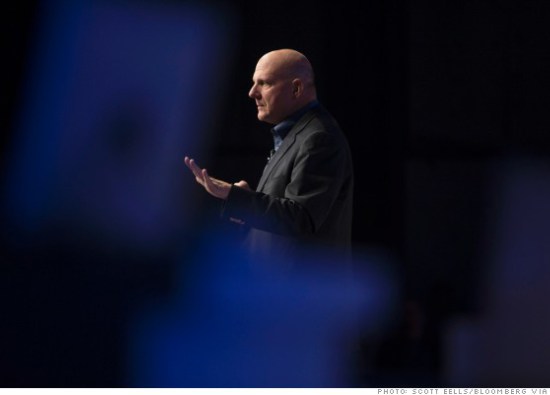 Steve Ballmer, chief executive officer of Microsoft Corp., speaks during an event in New York, U.S., on Thursday, Oct. 25, 2012. Microsoft Corp. will be constrained in a contest against Apple Inc. in the market for handheld computers by unveiling a tablet that doesn't work with some of the most widely used downloadable applications. Photographer: Scott Eells/Bloomberg via Getty Images
Bloomberg 2012 Bloomberg

In what is likely his final press interview as Microsoft CEO (part of which you can read, here, on this very website), Steve Ballmer was reflective. Sure, the company tripled revenues and doubled profits since he took the reins in 2000 — but it also made mistakes, he acknowledged.

“I pride myself on the fact that we do make a lot of money,” Ballmer said. “And do we waste it every now and then? Sure, of course, we waste it or we take a false step. But what you’re trying to do is make money for the long run, not the short run.”

When I sat down with Ballmer in his office — the same one that his predecessor Bill Gates previously occupied in Building 34 on the company’s Redmond campus — he was relaxed. He wore his trademark blue button-down dress shirt, khaki pants, and loosely tied brown shoes, which he slipped on and off repeatedly as we talked.

In conversation, there were no rousing renditions of “I love this company,” as Ballmer has so willingly indulged in at Microsoft (MSFT) conferences over the years. There were no moments where he was near tears. He was thoughtful in answering my questions, slouching in an arm chair and draining an extra-large iced tea from Starbucks as we talked.

I asked Ballmer what management lessons he learned during his 13 years atop the company — a question many may find ironic, given his turbulent tenure. (The company’s stock price has hovered between $25 and $30 per share for much of the last decade, with only a single split along the way.) Here’s what he said.

“If the CEO doesn’t see the playing field, nobody else can,” Ballmer said. “The team may need to see it too, but the CEO really needs to be able to see the entire competitive space.”

That’s because the playing field is always changing. “Ten years from now, will devices look the same as they look today or quite different? And will they be funded primarily by gross margin on the device or will it all be just ads and commerce from guys like Google (GOOG) and Amazon (AMZN)?” he asked. “The truth is, whoever sits in the CEO seat needs to have enough perspective to have an intelligent opinion.”

2. Talent is only one part of success.

A chief executive needs to recruit and hire the best people to surround him; that is without doubt. But that alone isn’t enough, Ballmer cautioned.

“It’s not like you want to say, Hey, look, I’ve hired three of the best people, and I’m just going to leave them completely alone, and then great things are going to happen,” Ballmer said. “You have to mesh them with other people. You’ve got to mesh them with yourself.”

Under Ballmer, Microsoft made some very big bets on a few high-profile individuals, among them Steven Sinofksy, the head of Windows; J Allard, the Chief Technology Officer in Xbox; and Ray Ozzie, Chief Software Architect. All are no longer with the company. When I asked Ballmer if he was thinking of anyone in particular, he declined to name names.

“People selection is key, moving people on is key, and not viewing people as individuals, sort of artisans to be left alone, in any job, in any one of the jobs,” Ballmer said. It is a myth that a company is built on the backs of a few superstars who “go and get the tablets from the mount and bring them back.” In an industry that operates at scale, that’s just not the way things really work.

“We tried it,” Ballmer said. “We tried it with me and Bill for a while. We’re better when we have very talented people who we also stitch together.”

“There was a day when people said all the money is in software; get out of hardware. Well, the two most profitable companies this year in our business will be hardware companies,” Ballmer said, referring rivals to Apple (AAPL) and Samsung. “Then somebody will say, Oh, it’s all about advertising.”

“Some guys really do make good advertising money, but some businesses are poorly funded,” he added, taking a dig at rival Google (GOOG).

His point? There is no single business model that’s perfect for every company or every era.

There is more flexibility in the technology industry around developing, funding, and marketing models than there may be in the automotive or pharmaceutical industries, Ballmer said. Still, CEOs in all areas need to remain vigilant and rigorous when it comes to evaluating and adjusting their models.

Every company has a long cycle and a short cycle, Ballmer said. “Getting the big things right that make all the money, that’s long cycle,” he said. But “really executing in a way that allows you to do it, that’s short cycle.”

This was no more evident than around Microsoft’s “Longhorn” debacle, which would arrive to market as the ill-fated Windows Vista operating system. Ballmer conceded that the company set too ambitious a plan, took too long to correct its strategy and delivery plans, and waited too long before reassigning its “A” team on other projects and products.

“I obviously understand the business stuff better than the technology stuff,” Ballmer concluded. But “I’ve grown, and when you grow, you say, ‘Wow, I didn’t know what I didn’t know.'”