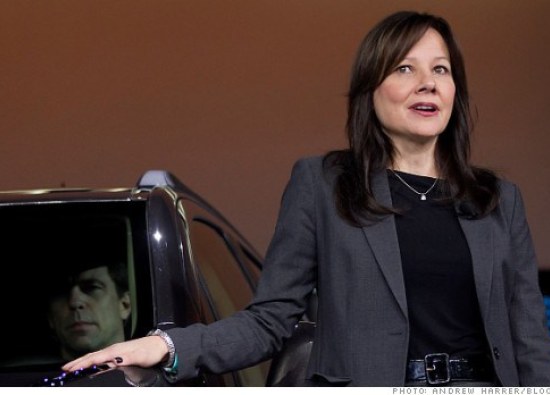 Mary Barra, the newly named CEO of General Motors (GM), will become the 23rd female CEO of a Fortune 500 company.

And based on revenue–which is what the Fortune 500 is all about–she tops the rankings of women in charge of America’s largest companies.

Barra, 51, is the first female chief of a major U.S. automaker. She has cars in her blood. Her dad was a die maker for GM’s Pontiac division for four decades. Barra attended college at the General Motors Institute (now Kettering University) in Flint, Michigan, as a co-op student; she worked six months of each year for GM in exchange for the company paying her annual tuition. She started in a Pontiac plant, graduated college in 1985 with a degree in electrical engineering and, over 33 years at GM, climbed to her current post as EVP of global product development, global purchasing and supply chain.

She earned the acclaim of her bosses for bringing new rigor to GM’s famously dysfunctional product development process, Barra upgraded the cars and the corporate culture too. Previously head of global human resources–a role assigned to her in 2009, right after GM filed for bankruptcy–she relieved GM employees of onerous work rules and relaxed the dress codes.

You’ll have to wait until next October to find out where Barra will rank on the 2014 Fortune Most Powerful Women list. But given the stature of her new job, she’ll surely move way up from her No. 29 ranking on the 2013 MPW list.

The annual MPW list ranks businesswomen based on the size and importance of the business in the global economy, the health and direction of the business, the arc of the woman’s career, and global influence. GM’s direction has definitely been positive. Barra is copping the CEO job one day after the U.S. Treasury announced it has sold its entire stake in the once critically sick company. With a stock-market capitalization of $56.8 billion, GM is more valuable than HP, even as the stock of that troubled tech giant has almost doubled this year. IBM (IBM), which has a market cap of $192.7 billion, is the most valuable company run by a woman: Ginni Rometty, who is No. 1 on the current Fortune MPW list.

Here’s Barra, interviewed by CNBC’s Becky Quick, at the 2013 Fortune MPW Summit. And below is Barra, in our MPW Summit series on Breakthrough Moments in Leadership, explaining how she learned to motivate employees while running a GM assembly plant a decade ago.