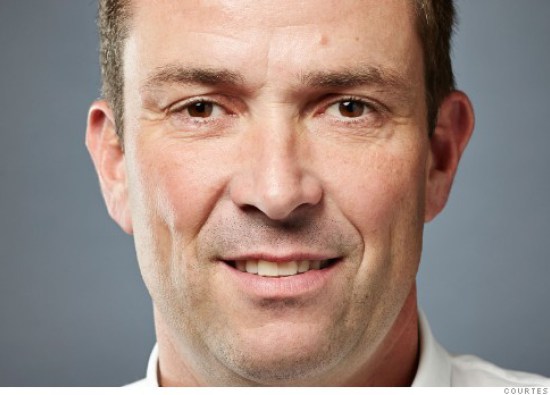 Laurent Potdevin wakes up at six in the morning, tapping his alarm clock and slowly making his way down a sleek wood hallway toward the stairwell. He approaches each step with a TOMS-adorned foot, passing a collection of Burton snowboarding gear before entering his kitchen, where his refrigerator is adorned with various pictures of him on the slopes and him smiling with children who appear to be from developing countries.

He drinks his coffee out of an ‘I <3 LA’ mug, resting it on a table holding management books such as Jim Collins’s Good to Great and Michael Watkins’s The First 90 Days. He picks up a silver pen; it’s resting atop European bills, next to a white Louis Vuitton knit hat.

With the flick of his wrist, he signs a crisp white contract on a line labeled “Laurent Potdevin, CEO, lululemon athletica.” He slips off his TOMS, leaving them under the table, and moves to another space, where he sits cross-legged. He stares directly at the camera, raises his eyebrows and smiles. He doesn’t say “om,” but he might as well.

This is the carefully crafted version of new CEO Laurent Potdevin that Lululemon (LULU) wants its customers to see. In a video published Monday, the company introduced its customers to the former Louis Vuitton manager, Burton CEO, and TOMS president — nodding to his past gigs, then asking Potdevin to shed them before joining the Lululemon team in Vancouver.

The polished short film was probably a reaction to founder Chip Wilson’s wildcard comment last month, when he implied that Lululemon is not for larger women when asked about customer complaints about pilling pants. It was Lululemon’s attempt to regain control of its leaders’ brands after several months of C-Suite confusion. And with Potdevin’s promotion comes Wilson’s demotion. He’s stepping down from his chairman role in the spring and will be replaced by current board member and former Starbucks (SBUX) exec Michael Casey.

In July, Fortune interviewed Wilson, and he seemed to believe his involvement in the company would be both deep and lasting. “Lululemon is a culmination of everything I’ve ever done in my life and I’m here for the long run,” he said. But Wilson often clashed with previous CEO Christine Day, stepping on her toes during the decision-making process. It looks like the board wised up before bringing in the next generation of leadership, though Casey vehemently maintains that the decision wasn’t triggered by a particular event and it was a group conversation between the board and Wilson.

On paper, these management changes are good — but they do leave several questions unanswered.

Lululemon’s quality issues over the past year stemmed from the company growing too fast for its infrastructure. In an interview with Fortune, Potdevin says he’s excited to focus on international expansion. The production team feels confident that it’s implemented the appropriate changes to handle the product snafus going forward. But customers seem to disagree, as evidenced by the complaints that sparked Wilson’s irritating comments. (Lululemon held its pants aren’t sheer and pilling is not common; its customers were simply buying their clothes in too-small sizes.)

Better in-store education would help the problem. Lululemon’s products are highly technical and activity-specific, which is why salespeople are trained to teach guests about the products’ complex details. But Casey doesn’t think education needs a facelift, and Potdevin remained mum on the topic when we talked on Tuesday. “I’m not sure we intend to change the education process,” said Casey. “We think our system is unparalleled.” As someone who’s shopped in countless Lululemon stores, I can easily say I’ve never once been “educated” — and I’m not the only one.

Potdevin is also a stranger to Lululemon’s unique company culture. Though the books featured in his introductory video are some of Wilson’s favorites, there are a few missing — like Rhonda Byrne’s The Secret and pieces written by the Landmark Forum’s leadership team. That kind of literature, which pushes self- and professional-development as well as increased personal responsibility, both attracts and deters prospective employees. Potdevin said he’s unfamiliar with Landmark’s teachings, but is interested in self-development and plans to check it out — a casual attitude, considering Lululemon employees have been required in the past to embrace Landmark’s teachings, or they’ll sink professionally. The culture can stifle outsiders coming from more traditional companies and is said to have wedged a divide between longtime Lululemon employees and the newbies working to find their bearings.

Potdevin’s made it clear he reports to the board — not Wilson. The founder remains a director and Lululemon’s largest individual shareholder. It’s naive to think Wilson won’t have any influence over Potdevin’s decision-making. The new CEO could be the final piece in professionalizing Lululemon — Day tried, but Wilson’s meddling and her lack of retail experience made it tough to move further than she did. All Potdevin needs to do is stand his ground, and Wilson may continue to fade away.