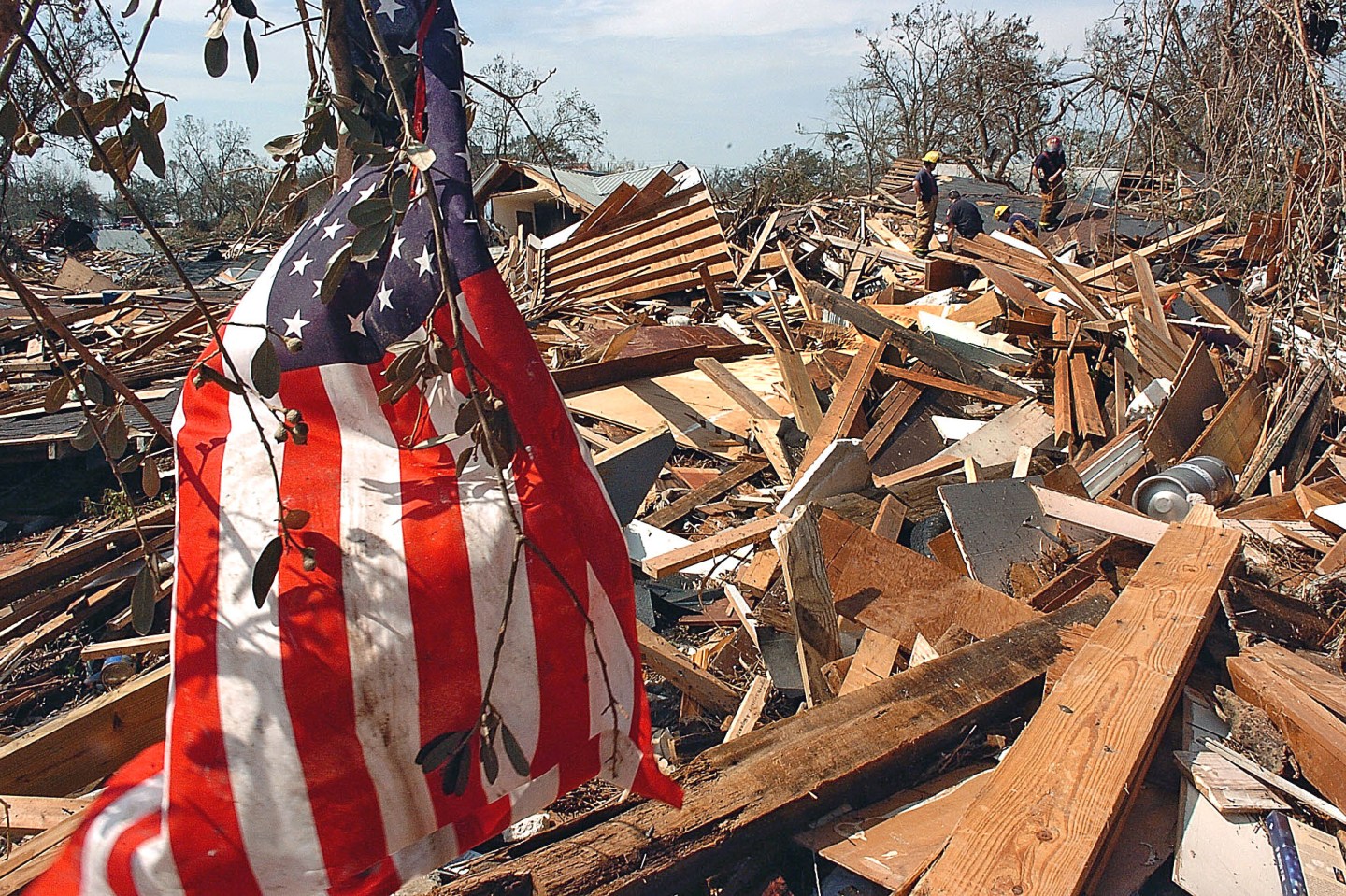 NO FILM, NO VIDEO, NO TV, NO DOCUMENTARY - Members of the Biloxi fire department search through the destroyed remains of the East Biloxi, Mississippi neighborhood Tuesday morning, August 30, 2005. The fire department had recovered six-bodies from the neighborhood by early morning. Photo by Patick Schneider/Charlotte Observer/KRT/ABACAPRESS.COMNo Use IC France. No Use Belgium. No Use Canada. No Use USA rights only Frederic 2004.
Patrick Schneider—Charlotte Observer/KRT/ABACAPRESS.COM/REUTERSa

We asked eight Fortune 500 CEOs from companies like Home Depot and Gap how they coped with Katrina—and how the storm changed the way they think about crisis management. The upshot: Take care of your employees, keep communication lines open, and get ready for the next disaster.

Learning from one crisis at a time. The rules of crisis management have changed. Ten years ago the only thing we had in the backroom of our stores was a first-aid kit, and it had some Band-Aids in it. During Katrina we followed a script that we used in 2001 after the earthquake hit Seattle. Back then our main office was at the epicenter, and we lost the use of our building for over a year. We learned from that and purchased a notification system. We told the vendor, “You have to create a way for us to do text messaging.” The voice part collapses too easily. The night before Katrina hit, 2,300 phone calls went out. We had a voicemail system that told our people to call or text message us and tell us what their needs were. Our first priority was to ensure that every one of our partners was accounted for and understood what resources were available. We didn’t lose anyone.

Making life easier for your employees. We have 8,000 people affected by this, and many of them are homeless. We had a few fatalities. We haven’t located all our people yet. The one thing I’ve been very pleased with is our decision to tell all our employees that they’d be paid for at least 90 days. That message went out before the storm. Whatever certainty you can provide during a period in their lives when everything is uncertain, is a tremendous help. But Katrina also brings home the fact that casinos need to be built on land, like regular old buildings. Provisions, which began in Iowa in the late 1980s, put casinos on water. They never made any sense. I want you to envision something. We had two large facilities on the Gulf Coast, one in Gulfport and one in Biloxi. Both of them, by statute, were casinos on barges. One was a football field in length and three stories tall. It was dislodged and thrown across U.S. 90, where it landed on the other side of the road. Can you imagine something that large being thrown with that kind of force?

Safety through e-mail. The most important thing in dealing with any crisis is communication, so we moved our e-mail system out of New Orleans and up to Washington, D.C., before Katrina hit. Our people were able to send e-mails and pictures through the system, and we were able to find out the status of each hotel. It also helped us communicate with vendors, which came through with water and food. We also mounted a tremendous publicity drive to find and communicate with our people. Even Willard Scott (on NBC’s Today) wore a DIAL 1-800-MARRIOTT T-shirt. We found 2,500 of our 2,800 people in the region and have been providing housing for them–in some cases, room rates as low as $19 a night. We’ve also provided about 200 jobs for them in other parts of the country. A lot of people are just trying to figure out what to do with their lives.

A call for a government playbook. When I first heard about Katrina, my reaction was as a human being, not a CEO. Your heart races. You think about who you know there and how they might be affected. You can’t help but have similar feelings to 9/11. You just have trouble comprehending the level of devastation. I’ve spent my whole life building homes for families, and now you watch film of tens of thousands of families losing their homes, and it’s heart-wrenching. We build what they lost, so we have a personal, emotional tie to at least some of their loss. I was asked what I would have done differently had I been the head of FEMA. When you watched the inability of the U.S. to respond effectively, it shakes your confidence in what is supposed to be the most powerful country in the world. I just think we ought to have a playbook for every level of government, including texts. We develop texts for our sales agents. Why isn’t there an exact text as to what it takes to send in the troops?

Surviving a bump in the road. I was in Europe, and when I got on the phone and asked, “What can I do?” the team was well down the road. For the first time ever, we converted our HR service center in Chicago into a help center. We needed a central command center, and we handled about 3,800 calls. Over 280 of our restaurants closed; 201 have reopened. Fifteen or 20 are a total loss, but we’re committed to rebuilding all the restaurants. Our long-term strategies haven’t changed, but Katrina created short-term problems. Rising fuel prices have not impacted us that much. Now I think people will have to choose between filling their tanks and visiting retail, and maybe they’ll visit less. But we’ve found that after other hurricanes, our restaurants have done better than average when they get back up. They’re an oasis for people devastated by the damage, one of the first ways people get back to normalcy.

Preparing for the next big one. After each catastrophic event we do a postmortem, and we become more experienced and prepared. From Florida’s four hurricanes last year we learned a lot about what merchandise was in short supply and how everything unfolds. So this year we pre-staged extra supplies and generators to run the stores in the Katrina strike zone. As the hurricane neared, we transported and lodged about 1,000 relief associates to work in stores in the affected areas of Louisiana and Mississippi. Last year we saw what merchandise we needed more of, so right after Katrina we were ready to quickly dispatch the first phase of the response with products like insecticides, water, diapers. We also learned how to shut our stores down tighter and more quickly, so we could get up and going faster. On the Thursday after the hurricane, I went in a helicopter to survey all our assets. When I saw our stores up and running in areas with nothing else open–to see hundreds of customers in the parking lot was a real tearful moment for me. But we have new lessons to learn. In some cases, I couldn’t get gasoline for my associates to drive to the stores, so some had to stay in their cars overnight. Now, for the next hurricane, we’ll know to have portable gas.

“Getting everybody taken care of.” When the levees broke, you had a humanitarian crisis. Not a storm. The thing that kept going through my mind was: What kind of shepherd are you if you’re missing one sheep and you don’t go get him? Just getting everybody taken care of was the first thing. The rest of the stuff is frankly just money. We were initially missing 35 employees; after the first night we were missing 22; then 11. We worked that down to two and then one. We used the network infrastructure to trace her phone. Now, her last call had been that water was rising fast, and she didn’t think she was going to be able get out. She was sending a text message to one of her friends in Atlanta. We were able to call that person and get the details of where she was. The Army was able to work with us and get her out. For the most part we got this one right, but that was largely because we had an employee here who is a former Army Special Forces colonel. I’m sure at one point I looked at him a little wide-eyed, and he said, “Let me tell you what we can do, and here are our options.” And I said, “Let’s take the most aggressive one; let’s go get all our people out.” And he said, ‘Fine.'” Now, if I said that to the head of marketing, he’d still be sitting here.

Empowering the workforce. Leaders, during any disaster, need to give a sense of empowerment, a sense that everyone is participating in the relief effort. We allowed our employees to transfer their paid time off to some 1,300 employees affected by Katrina. We have 150,000 employees. All are eligible, and so far they’ve donated 11,000 hours. Taking care of employees was our No. 1 priority. We gave housing and clothing allowances. We also extended payroll to affected employees for 30 days. One of the challenges has been getting money to our employees. Many live paycheck to paycheck. One thing we’re going to do is encourage more employees to set up direct deposit–a small tactic, but a lesson we learned from Katrina.

A version of this article appears in the Oct. 3, 2005 issue of Fortune with the headline “New lessons to learn.”