A ‘super strain’ of gonorrhea circulating in the U.S. is so powerful that it can evade many antibiotics used to treat it, experts say 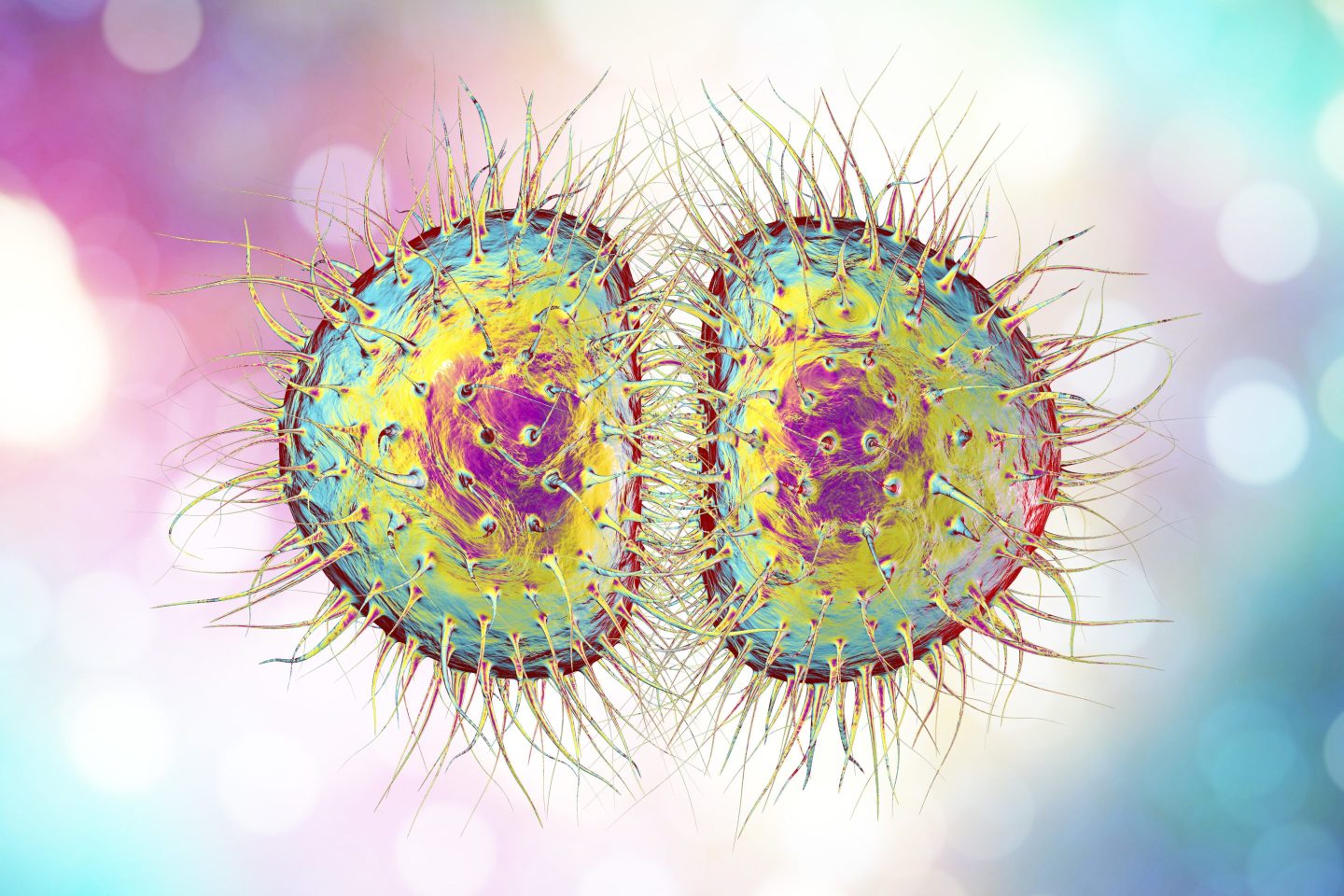 A computer illustration of Neisseria gonorrhoeae bacteria. A “super strain” of gonorrhea—against which many types of antibiotics are less effective or not effective at all—has been identified in the U.S. for the first time, health officials said Thursday, raising further concern that a post-antibiotic era is approaching.

A so-called “super strain” of gonorrhea—against which many types of antibiotics are less effective or not effective at all—has been identified in the U.S. for the first time, health officials said Thursday, raising further concern that a post-antibiotic era is approaching.

The case, identified in Massachusetts, was successfully treated with ceftriaxone, an antibiotic recommended to treat the disease, state health officials said in a news release. A higher-than-recommended dose wasn’t required to clear the infection, a state public health spokesperson tells Fortune, though the U.S. Centers for Disease Control and Prevention recently doubled the recommended dose.

The newly identified strain showed reduced susceptibility to three types of antibiotics and resistance to an additional three, including penicillin. It marks the first U.S. case in which all recommended drugs were less effective or completely ineffective, the state health department said in a Thursday bulletin to clinicians.

The case serves as “an important reminder that strains of gonorrhea in the U.S. are becoming less responsive to a limited arsenal of antibiotics,” health officials said in a statement.

The U.S. is experiencing “a rising epidemic of sexually transmitted disease,” Dr. Georges Benjamin, executive director of the American Public Health Association, tells Fortune, with some experts referring to the issue as a “hidden epidemic.”

Cases of gonorrhea—an STD that often shows no signs, but can lead to genital discharge, burning during urination, sores, and rashes, among other symptoms—rose by 131% nationally between 2009 and 2021, according to public health officials. While rates of STD transmission in the U.S. fell during the early months of the pandemic, they surged later in the year, with cases of gonorrhea and syphilis eventually surpassing 2019 levels, according to the CDC.

Another similar strain of gonorrhea, with reduced response to ceftriaxone and another antibiotic, was also recently identified in Massachusetts, health officials noted. And a similar case was recently seen in Nevada, though that strain remained sensitive to at least one type of antibiotic.

The novel strain has been previously reported in Asia-Pacific countries and the United Kingdom in recent years, Massachusetts health officials said. It’s similar to a case previously seen in Nevada, though that strain remained sensitive to at least one class of antibiotics.

As of Tuesday the CDC still hadn’t responded to Fortune’s question as to whether the strain, or similar ones, have been identified elsewhere in the U.S.

Untreated gonorrhea in women can lead to pelvic inflammatory disease, which may entail internal abscesses and/or infertility, and can increase the risk of an ectopic pregnancy, according to the CDC. In rare cases, untreated gonorrhea can also lead to infertility among men. And the bacteria can spread to the blood in anyone, regardless of gender, leading to a potentially life-threatening condition called disseminated gonococcal infection.

The Massachusetts case highlights the growing concern regarding antimicrobial resistance, one of the top 10 public health threats facing humanity, according to the World Health Organization. Antimicrobial resistance occurs when bacteria, viruses, fungi, and parasites evolve over time, becoming less responsive to medicines, making infections increasingly difficult, or impossible, to treat.

“We are watching this antibiotic era turn into a post-antibiotic era,” Dr. Michael Osterholm, director of the University of Minnesota’s Center for Infectious Disease Research and Policy (CIDRAP), tells Fortune. “That is a scary proposition.”

Global efforts are underway to slow the increase of resistance, since it’s an impossible process to stop, he says. But little is being done in this regard, or to develop new treatments. A November 2021 statement by the WHO called the clinical pipeline of new antimicrobials “dry.”

Two years later, that pipeline remains dry, according to Benjamin. As an increasing number of treatments become ineffective due to antimicrobial resistance, “we’re having to use ‘more powerful drugs’ with more side effects,” he says. “At some point, we won’t have anything useful to treat [gonorrhea] with.”

It wasn’t so long ago that “children died all the time from bacterial infections that today we wouldn’t think twice about—they’re easy to treat,” Osterholm tells Fortune.

Antimicrobial resistance, like climate change and preparation for the next pandemic, are insidious issues, relatively easy to ignore—until they’re not, he cautions.

“One of the challenges right now is envisioning this new world and doing something about it,” he says. “We talk about it, think about it, hold a couple of meetings about it. But in the end, what have we really done to change the course of the future?”