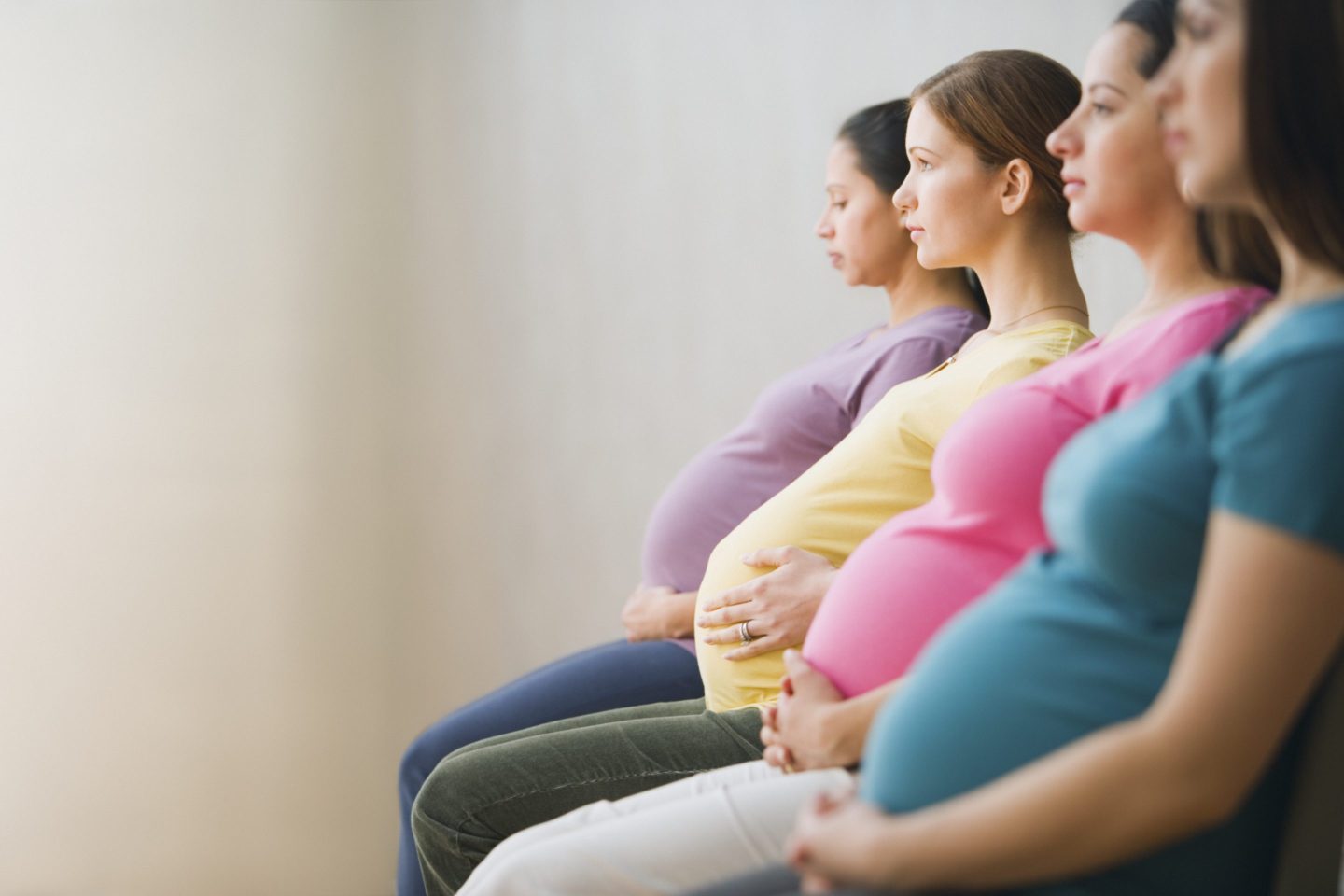 Assisted reproduction is a booming industry–and the demand for gestational carriers has never been higher.
Getty Images

By the time Ceara Lewis considered becoming a surrogate, she’d already had two children of her own. Each of those pregnancies, she told me, was “perfect.” She delivered her babies so quickly that no epidural was administered either time.

Lewis also worked at the San Diego Perinatal Center, where in her capacity as a supervisor, she saw “women doing everything right to try to have a baby, and sometimes it just doesn’t work.” When a girlfriend who’d been a surrogate suggested that role for Lewis, she didn’t hesitate to apply. “I always say, you do something for someone who can never repay you–and that’s what I feel I did for them.”

What unfolded was a nightmare. Despite previously experiencing two ectopic pregnancies in addition to the two children she’d delivered, Lewis was approved as a surrogate and quickly matched.

Her first pregnancy, for a couple in Turkey, took several attempts and required a c-section. Her second, for two physicians in Florida, was an ectopic pregnancy, requiring medical intervention. Lewis then dealt with gestational diabetes, acid reflux, intractable vomiting, severe dehydration, preterm labor, and another c-section before delivering at 32 weeks a baby girl, who spent the next several weeks in the neonatal intensive care unit. At one point, stricken and bedridden, Lewis asked one of the doctors if she was going to survive. She said she didn’t know.

“Surrogacy is a for-profit business,” Lewis says now. “No one’s going to tell you that there’s a possibility you could die. They’re trying to make money, so they tell you about the glitz and the glam. I would never do it again–and I would never recommend it to anyone.”

Globally, surrogacy is booming. Its market exceeded $4 billion in 2020, is valued at over $14 billion in 2022, and is projected to achieve nearly 25% compound annual growth rate in the next decade, according to Global Market Insights. And while it is illegal in many parts of the world, the practice has found a home in the U.S., where 47 states either permit and regulate surrogacy or do not expressly prohibit it, according to fertility lawyer Richard Vaughn. Michigan, Louisiana, and Nebraska are the exceptions.

The best estimates from experts are that perhaps more than 300 agencies in the U.S. actively recruit women primarily to be gestational carriers (GCs)–that is, to act as a surrogate for intended parents and carry a fetus to which the women bear no biological relation.

A years-long increase in demand has fueled what researchers sometimes call “fertility tourism.” For example, wealthy Chinese parents often hope their children will receive the double benefit of guaranteed U.S. citizenship and access to the American school system by having their babies born here, says Dr. Holly Casele, chief of maternal fetal medicine at Rady Children’s Specialists of San Diego.

Ceara Lewis was a surrogate twice–in 2014 and 2017. Lewis says no one made sure she understood the risk of complications.
Courtesy of Ceara Lewis

Today, the cost to the prospective parents can reach over $300,000–and surrogates themselves may be paid anywhere from about $35,000 to $100,000 for a pregnancy. Lewis says she was paid $22,000 plus incidentals that ran to several thousand dollars more, for her first surrogacy years ago. She received an additional monthly stipend to pump breast milk “EVERY two hours, for six months night and day,” she says for her second family. “I’d go to sleep at 10 p.m., wake up at midnight, wake up at 2 a.m., wake up at 4 a.m. and then I would freeze the milk, pack it, and ship it.”

A paucity of data

Yet we have no cohesive policy on surrogacy. Instead, regulations vary from state to state, sometimes wildly. Moreover, potential surrogates may be accepted by some agencies despite risk factors that got them rejected elsewhere.

Even doctors are looking at a health landscape that is poorly defined. If it’s unclear to them, what chance do the surrogates themselves have?

“I think very often surrogates don’t understand the potential risk,” says Dr. Casele. “I think they assume, ‘Oh, my other pregnancies were so easy,’ and then they have a more complicated pregnancy. I don’t think there’s full disclosure of what the potential risks are.”

Gestational surrogacy requires in vitro fertilization (IVF), in which an embryo is created using the eggs and sperms of the intended parents or donors, then implanted in the uterus of the gestational carrier (or surrogate).

From 2010 to 2019, per fertility clinic data reported to the CDC, the number of embryo transfer procedures using a gestational carrier more than tripled to 9,195. While there was no data available on the exact number of live-birth deliveries through surrogacy, a CDC report found that between 1999 and 2013, gestational carriers gave birth to18,400 infants, and the number of IVF cycles using GCs more than quadrupled.

In addition to widespread ethical concerns about surrogacy, IVF is inherently a higher risk than spontaneous pregnancy, both to the mother and the child, Casele says.

A small 2017 retrospective analysis that looked at women who had had a spontaneously conceived pregnancy and later became a gestational surrogate using IVF, determined that twin pregnancies were much more likely in the latter( 1% vs 33%).

That is riskier in part because multiple-birth infants are at significantly higher risk of being born preterm, delivered by c-section, and needing expensive care throughout their lives. In the analysis, surrogate pregnancies (those with a single baby) had higher rates of maternal complications, including gestational diabetes,  hypertension, placenta previa, and c-section–and were three times more likely to result in preterm birth when compared with their own spontaneous pregnancies.

Given all this, why don’t we have a clearer or more uniform set of regulations and health data about surrogacy in our country? In part, it’s because the U.S. has no federal laws regarding the practice.

The result is a complicated, evolving patchwork of legislation and case law, with some states, such as California, allowing for commercial contracts, key legal protections for the would-be parents, and no limit on the payments surrogates can receive. This worries some bioethicists, who fear low-income women can be induced into surrogacy by sheer financial need.

There’s a paucity of data regarding the physical and mental health outcomes of gestational carriers. Though fertility centers must submit newborn outcomes to the CDC, surrogate maternal morbidity and mortality figures are not mandated, nor are potential long-term risks to the surrogates’ health.

A CDC spokesperson told me the agency does not track maternal complications specific to surrogacy–things like ectopic pregnancy, placental abruption, and preeclampsia–nor hospitalizations and deaths.

How are we allowing the hire of young women to carry babies for others and not closely monitoring how it may affect their health?

A 2019 review of 36 articles attempted to define the risks of surrogate pregnancy. The researchers found that the list included low birth weight, a higher risk of having multiple babies, and preterm birth. The surrogates themselves were at higher risk of developing gestational diabetes, hypertensive disorders of pregnancy, and bleeding complications after birth. And despite the recent decline in IVF twin rates, a study of data from the U.S. national assisted reproductive registry found that surrogates consistently had higher rates of multiple births than other IVF patients.

Professional groups such as The American Society for Reproductive Medicine have set recommendations for screening and evaluating prospective surrogates and intended parents.

While these guidelines offer a basic framework, “They really don’t have teeth,” says Helen Kim, a fertility expert at Northwestern University Feinberg School of Medicine.

For example, a committee opinion from the ASRM and the Society for Assisted Reproductive Technology recommends that a potential GC undergo a “complete medical evaluation” among other things yet does not include a comprehensive list of which prior obstetric complications should disqualify her from becoming a surrogate. And there’s no record to indicate whether the guidelines are being followed.

Anyone can open an agency

“Often inappropriate people are chosen to be surrogates,” says Casele, who oversees thousands of pregnancies a year. She mentioned the case of a woman with a prior pregnancy, which was complicated by severe preeclampsia (with stroke-range blood pressures) and required delivery at 28 weeks, who nevertheless was chosen as a surrogate. In the surrogate pregnancy, she again developed preeclampsia at 24 weeks, and delivered a baby who suffered severe issues due to prematurity.

Surrogacy agencies operate in a sort of wild-west business environment. ”Anyone can open an agency,” says Amy Kaplan, the founder of West Coast Surrogacy in California.

No state except New York requires licensure or has agency reporting requirements. “There needs to be oversight on so many levels,” Kaplan says, but broadly speaking, there isn’t.

The American Bar Association has approved a Model Act governing surrogacies and agencies to offer some guidance, Vaughn says, but states ultimately make their own calls.

When it comes to discussing potential medical complications with prospective surrogates, the water is muddier still. Although many surrogacy contracts contain boilerplate language specifying potential problems, including death, Ceara Lewis told me she had no such conversation with anyone in person. “One hundred percent, no one sat in a room with me and said, ‘These are the risks.’”

John Weltman, the founder of Circle Surrogacy, which has reach into 74 countries and a track record of over 2,500 successful births, told me his agency discusses potential complications with applicants and ultimately approves only two percent of them, often because of medical or psychological factors that might place them at risk. But at other agencies, Weltman says, that approval rate runs as high as 20%. That is the sort of difference that calls out for further study.

Plenty of surrogacies go smoothly, Weltman says, and the experience is positive, and the gift at nine months is a child. Weltman and his partner have had two children by a surrogate themselves.

Casele has also seen IVF used many times to help people “have a baby that is biologically theirs,” she says. But surrogacy is still in its infancy–and until more research is done to better understand its medical impacts, and a cohesive U.S. standard reflects that research, there are serious concerns that will go largely unanswered.