11 best prescription drugs, herbs, and supplements to help with hot flashes, according to an ob/gyn 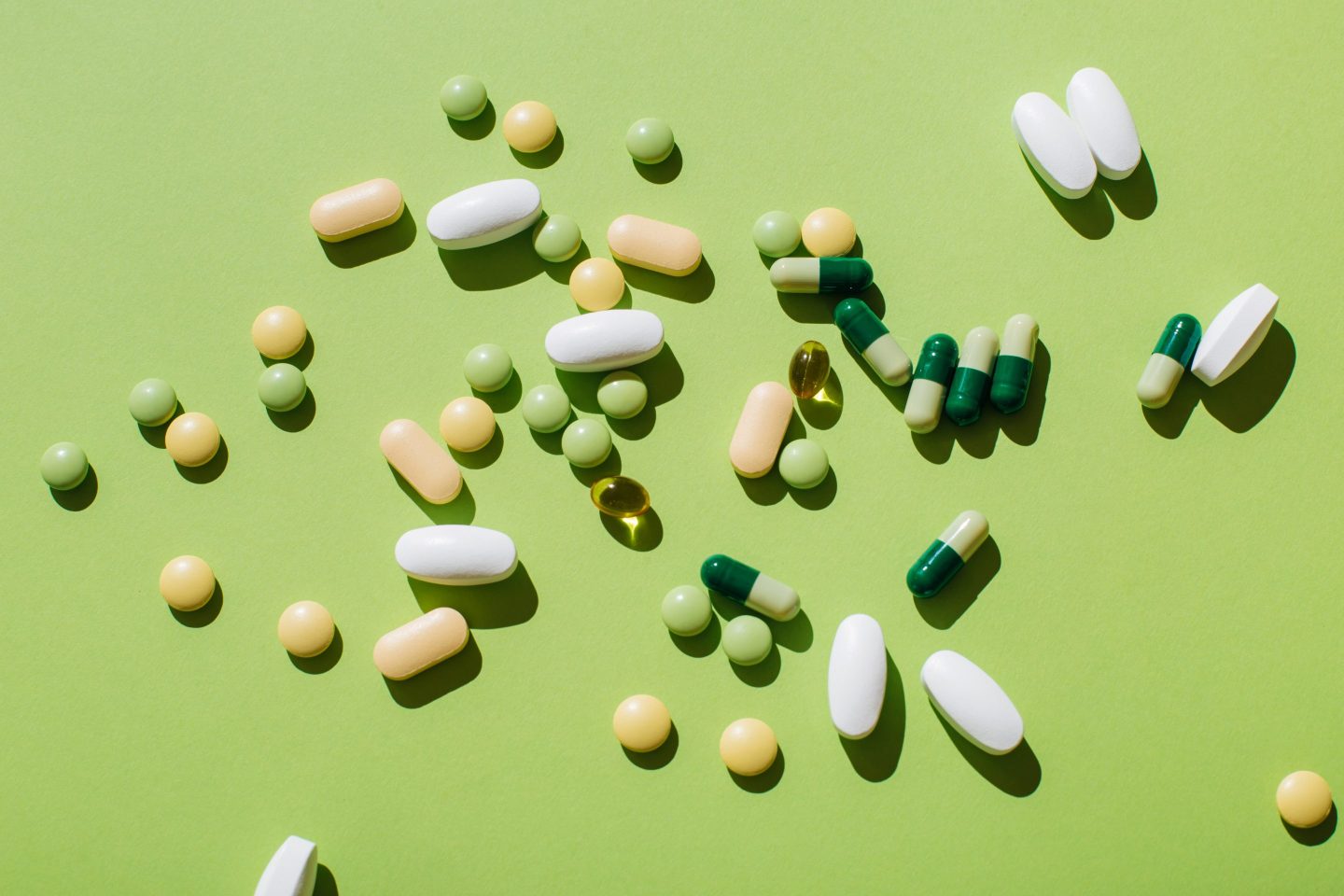 Eighty-five percent of women will have hot flashes during menopause.
Tanja Ivanova—Getty Images

My new book, Menopause Bootcamp, is designed to help you understand what’s happening with your body and the ways in which this transition may be unique to you. Every so often, a patient tells me that they feel as though menopause is punishment for being born with a uterus. I understand why it can feel that way sometimes. Let’s take a quick run through all the ways that menopause can upturn a person’s life: changes in libido, metabolism, and body image, and fears over genetic age-related illnesses. And of course, there are the hot flashes that come on out of nowhere and can make you feel as though you have entered a sauna. Eighty-five percent of women will have hot flashes during menopause, which can last from two to 10 years—and 9% of women over 70 experience occasional hot flashes. There are treatments that can help. As a board-certified ob/gyn, integrative women’s health doctor, and a breast cancer survivor, here are the medicines I prescribe to my patients, and my tried-and-true natural-product-based solutions.

Mood stabilizers/antidepressants
A review of research published in Journal of General Internal Medicine encompassing 11 randomized controlled trials found that among women going through the menopause transition and after, selective serotonin reuptake inhibitors (SSRIs) can reduce the frequency and severity of hot flashes. They may not be good for women with high blood pressure, and some shouldn’t be taken by women who have had breast cancer and take tamoxifen.

Menopause hormone therapy
This is a low-dose hormone therapy that replaces some of the estrogen that’s lost during the menopausal transition. The loss of hormones is the driving force of hot flashes, so compensating for some of that hormone loss has a positive effect on hot flashes. Whether it’s right for you will depend on your family history, genetic predispositions, and health status, as well as what you’re hoping to use it for. Additionally, progestin or my preference, progesterone, is used in those with a uterus to protect from overstimulating it with estrogen.

Gabapentin
Typically prescribed to control seizures due to epilepsy, as well as reduce pain owing to nerve damage, the drug gabapentin is also prescribed in some cases to help with hot flashes. For some patients, side effects such as drowsiness, fatigue, dizziness, and water retention in the limbs occur, so they discontinue it. But for others, it at least somewhat improves their flashing without much, if any, downside.

Everything in this list is fairly easy to buy in the United States, either in natural food stores or online. I am particular about safety and recommend only particular brands for that reason. My favorites include Enzymedica, Mountain Rose Herbs, Metagenics, Banyan Botanicals, Vital Nutrients, Remifemin, Kindra, and Cannapy Health.

Remember that when using supplements, you should make sure that they don’t interact with any medications you are already taking.

Black cohosh
This is a plant that’s native to North America; the supplement extract is made from the roots and underground stems. There have been a number of studies over the years that have tried to validate the effectiveness of black cohosh, and they’ve been a mixed bag. But a lot of my patients have found relief using it for up to six months. Black cohosh seems to be safe for people taking other medications, though it may change the efficacy of statins, according to researchers at the University of North Carolina. The dosage is 20 milligrams twice a day.

Red clover
This herb, which is part of the legume family and boasts red flowers, is found in Asia, Europe, and North America. Red clover’s effectiveness for menopause symptoms is probably due to its isoflavones, which act as a phytoestrogen (much like soy). For the same reason, red clover may be useful for staving off osteoporosis. But those with a history of breast cancer should avoid it. It’s available in tea, capsule, extract, and tincture forms, as well as topical form for some skin issues. Follow the packaging directions for dosage.

Soy isoflavones
Like red clover, the soybean is a legume, and its isoflavones are effective among some people who are dealing with night sweats and hot flashes. A 2019 paper in the journal Nutrients suggested that soy isoflavones may reduce the risk of developing certain cancers and other diseases. Forty to 80 milligrams per day of commercially prepared isoflavones are usually recommended. The data are mostly inconclusive, but it’s worth a try.

Russian or Siberian rhubarb
This plant has been used for millennia by Chinese and European herbalists. Modern science has demonstrated that it acts like a selective estrogen receptor modulator (SERM), according to a paper published in the journal Chinese Medicine; it selectively binds to some estrogen B receptors and has been shown in several small trials to calm hot flashes but not to increase endometrial tissue proliferation, which could lead to cancer. It seems for this reason to be safe for breast cancer survivors, but it might compete with tamoxifen and other estrogen-dependent cancer treatments, so it should be used with caution and under the supervision of a knowledgeable physician.

Pycnogenol/French marine pine bark extract
This fascinating botanical, derived from, yes, pine bark, is grown in the Mediterranean area, and according to the menopause journalist Ann Marie McQueen, is processed in a standardized and safe manner in Europe. You have probably never heard of it, and neither had I until recently. This plant-based medicine has a multitude of anti-inflammatory effects, which explains its benefits for cardiometabolic and brain health as well as arthritis, in addition to hot flashes—though how it works on that is unknown. Two hundred milligrams per day to 300 milligrams twice a day are common safe doses.

Milk thistle
This is a very popular herbal preparation most often thought of in connection with “liver cleansing” (a term I typically avoid as it is not used in conventional medicine and triggers all sorts of mayhem and judgments!). It must be used with care, as it can activate a liver enzyme (cytochrome P450) that is involved in processing medications and cause drug interactions. But it has shown promise in the treatment of osteoporosis and reduction of hot flashes in some small recent trials over a three-month period of time. The dose is 400 milligrams per day for 12 weeks.

Vitamin E
This occurs naturally in many foods, including olive oil, almonds, peanuts, and leafy greens, but it’s also a good supplement to add to your diet. In addition to calming hot flashes, vitamin E is important for your brain, blood, vision, and skin. Aim to get 15 milligrams of vitamin E per day. A small trial using high doses of 200 to 500 milligrams per day over a two- to four-month period resulted in minimal impact, and as these doses can also theoretically increase bleeding, it seems as though the risk of taking a higher dose does not outweigh the benefits.

Not only do hot flashes suck and seem to come on at just the wrong time—right before a presentation, as you’re walking into a cocktail party, in the midst of a tête-à-tête with your person—it’s also one of the symptoms that reminds you that the body that you’ve grown to understand and respect and even love is changing in fundamental and unpredictable ways. The symptoms themselves are a pain to deal with. But emotionally they can also be extremely disorienting. That’s what a lot of women say is the real struggle of menopause, not feeling like themselves anymore. As in Invasion of the Body Snatchers, where you become a person you don’t recognize. As a doctor, one of the ways I can support you is by helping to treat your symptoms as they arise.