Many Americans are shunning the Omicron COVID booster. What it means for the coming season as the virus mutates 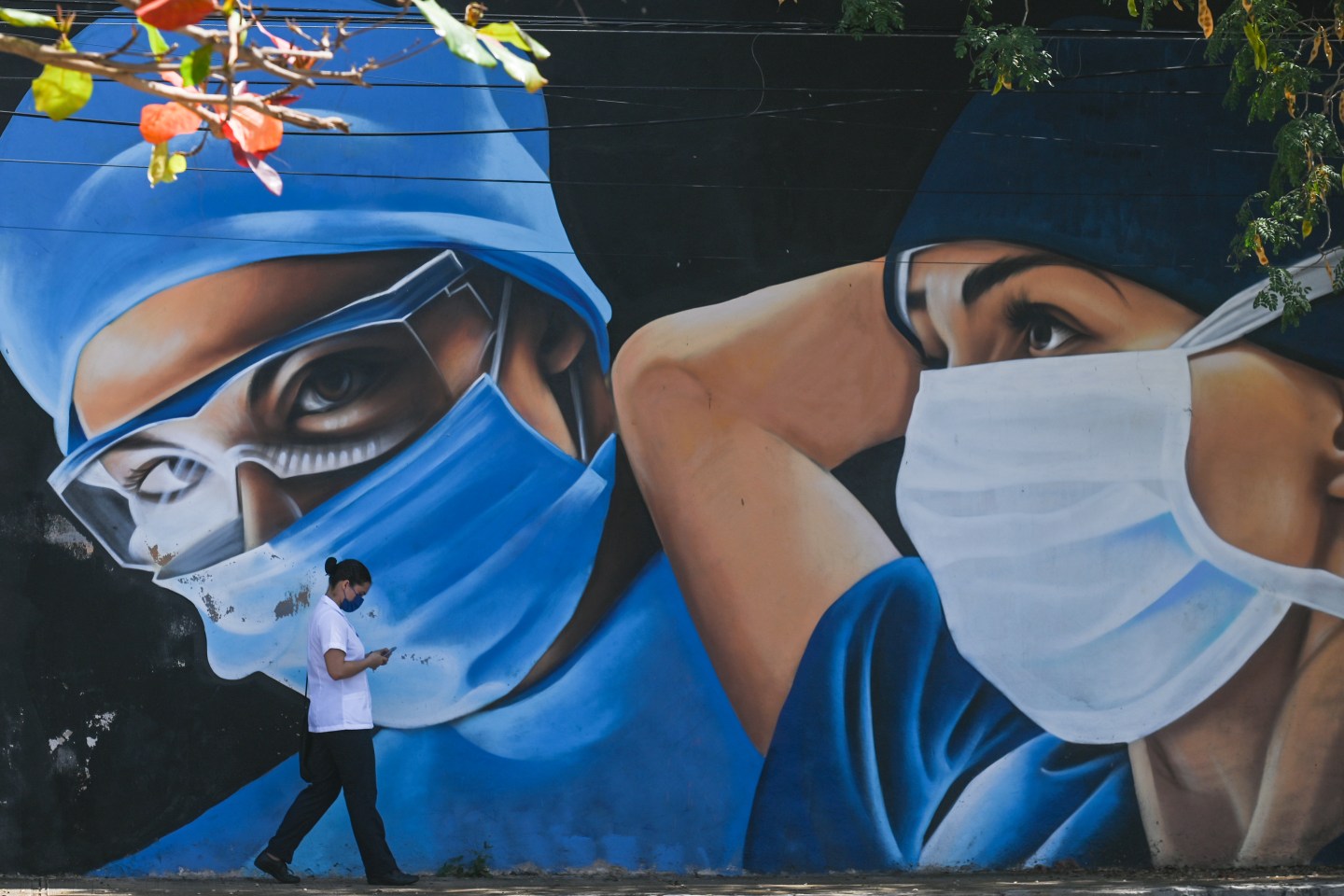 "We owe it to the public to say we could be seeing a future aspect of this pandemic unlike any we’ve seen today."
Artur Widak—NurPhoto via Getty Images

Relatively few Americans have received the new Omicron booster—and most don’t plan to get it anytime soon, if at all, according to a new survey.

Only 7.6 million Americans—out of 333 million total—have received the new COVID vaccine, which became widely available around Labor Day. That compares with 225 million people who received the initial jab.

Everyone 12 and older is eligible for the booster if they’ve received their primary shots. But most Americans—more than two-thirds—have put off receiving the jab or don’t intend to at all, according to a Kaiser Family Foundation survey released last week.

Supply isn’t an issue. The shot, purchased by the federal government, is free. And the updated jabs—produced by now-household names Pfizer and Moderna—use the same technology as the initial shots, with an added boost of protection against currently dominant Omicron strains BA.4 and BA.5.

So why is vaccine hesitancy rising, especially with a new wave of infections predicted to hit in the coming weeks? And what might fall and winter look like with a population with waning COVID immunity?

Experts say COVID fatigue, among other factors, has the vaccine-friendly—who are weary of jabs that protect against death but don’t prevent illness—joining the ranks of the vaccine-hesitant, as the pandemic lingers into its third year.

“Nobody is willing to take the vaccine,” Dr. Ali Mokdad, a professor at the University of Washington’s Institute for Health Metrics and Evaluation, told Fortune. The center’s modeling predicts a U.S. COVID wave that begins to rise in mid- to late-October and peaks in January.

Many Americans got their initial COVID shots, then boosters. But they still got COVID, he said. “And they gave up. They said, ‘I’m not worried about this virus anymore,’ and they’ve moved on.”

Slightly more than half of Americans report that they’ve already returned to their pre-COVID lives or are planning to in the near future, according to a September Ipsos poll. And roughly two-thirds believe the pandemic is over.

It comes as no surprise that most Americans have put the virus behind them, despite tens of thousands of new cases and hundreds of new deaths being reported daily. In May, leading U.S. infectious disease specialist Dr. Anthony Fauci told PBS News Hour that the country is “out of the pandemic phase.” And President Biden in September proclaimed that “the pandemic is over.”

If the pandemic’s over, why get a booster?

“If someone says everything’s over, people are not going to line up and get a booster the next day,” Dr. Raj Rajnarayanan, assistant dean of research and associate professor at the New York Institute of Technology campus in Jonesboro, Ark., recently told Fortune.

To add insult to injury, the CDC’s “community levels” COVID map shows that the majority of the country is seeing low levels of the virus, Dr. Georges Benjamin, executive director of the American Public Health Association, told Fortune. What’s not immediately apparent is that the map is more reflective of hospital COVID admissions and capacity. A more buried map shows high levels of viral spread in the vast majority of the country.

“Most of the nation is green on the CDC prevalence map,” Benjamin said, referring to the color associated with low “community levels.”

“I think people’s general perception is that the thing is going away. We just aren’t very good as a species at understanding risk,” he said.

Some Americans don’t question the country’s pandemic status but have lost faith in the shots, which were initially touted by public health officials as a one-time jab that would put an end to the pandemic, Mokdad says.

“‘They say, ‘My immune system has seen it, dealt with it, I don’t need the vaccine,’” he said. But “those people are among those who are still alive. They don’t remember the 4,000 or so that are dying on a weekly basis. People look at the outcome they favor and make a decision not to get the vaccine.”

Dr. Bruce Walker, director of the Ragon Institute of MGH, MIT, and Harvard, a medical institute focused on eradicating disease, and co-leader of the Massachusetts Consortium on Pathogen Readiness, agrees.

“I think the fact that vaccines are not fully preventing infection but are attenuating disease is something that has confused people and left them less anxious to get immunized,” he told Fortune.

Clueless about the booster

Some Americans aren’t actively rejecting the new booster—they just don’t know it exists. Slightly less than a third of Americans have only heard “a little” about new Omicron boosters, and 20% have heard nothing at all, according to the Kaiser survey.

Public health agencies aren’t messaging about the booster’s availability and benefits with the same volume and frequency as they did when COVID vaccines first arrived. The White House held a press conference Sept. 6 to herald the availability of the Omicron-specific boosters—then, silence, by and large.

“Quite frankly, there has not been a big push to get people the vaccine,” Benjamin said. “We told people it was there, but it was kind of a one-shot effort.”

Then there are those who know about it, but think they don’t qualify, according to Benjamin. Those 12 and older who have received their “primary series”—two shots of Modena and/or Pfizer—and who are at least two months out from their last shot (booster or primary series) are eligible, according to the CDC.

But those who received one-shot vaccine Johnson & Johnson, or a different vaccine like Novavax, may not know they qualify. And some who had been boosted prior to the advent of the Omicron shots may think they don’t need a new booster, Benjamin says.

While there has been some public health messaging—about the safety of getting your Omicron booster and flu vaccines together—the messaging focuses on the safety of receiving both at the same time, not that people should get both shots, Benjamin said.

“I think that’s a missed opportunity,” he added.

Adding to the country’s booster woes: Many Americans don’t seem to grasp that vaccines are required both during and after pandemics, Amesh Adalja, an infectious-disease specialist and senior scholar at the Johns Hopkins Center for Health Security, told Fortune.

Compounding the problem: There is no agreed-upon milestone the country must reach before exiting the pandemic and entering endemicity, in which a disease is present but doesn’t significantly disrupt daily life.

“People get the flu vaccine every year and there’s not been a flu pandemic since 2009,” Adalja said, referencing the 2009 H1N1 strain of flu.

Because COVID isn’t paralyzing the health care system like it once did, Adjala tends to agree with the notion that the pandemic is over, and that it’s transitioned to an endemic phase. But booster shots are no less vital, he says.

There exists a “false binary, a misconception that there’s nothing in between—it’s pandemic or it’s nothing,” he said. But “just because a pandemic is over doesn’t mean there isn’t work to be done to make COVID-19 even less of an issue.”

Adalja is optimistic. He says that booster rates may rise as those who recently received the old booster come to the end of their two-month waiting period for the new one. (The lag is supposed to reduce the risk of heart problems.) And many experts expect an uptick in booster rates if COVID rates again begin to rise this fall.

But as things stand, low booster rates mean new COVID variants will face less resistance in the U.S. Antibody immunity—both from vaccination and infection—fades after a few months, meaning those who haven’t recently been vaccinated or infected will be more susceptible to the virus.

“At this point we need to vaccinate as if [new variants] will not provide a new and critical challenge around immune evasion,” Dr. Michael Osterholm, director of the University of Minnesota’s Center for Infectious Disease Research and Policy, told Fortune. “But we owe it to the public to say we could be seeing a future aspect of this pandemic unlike any we’ve seen today.”