Sears Could’ve Been Amazon. Here’s How It Blew Its Chances

Sears was America's dominant retailer for decades. Here are four ways they squandered that lead.
BYPhil Wahba
May 20, 2019, 10:30 AM UTC 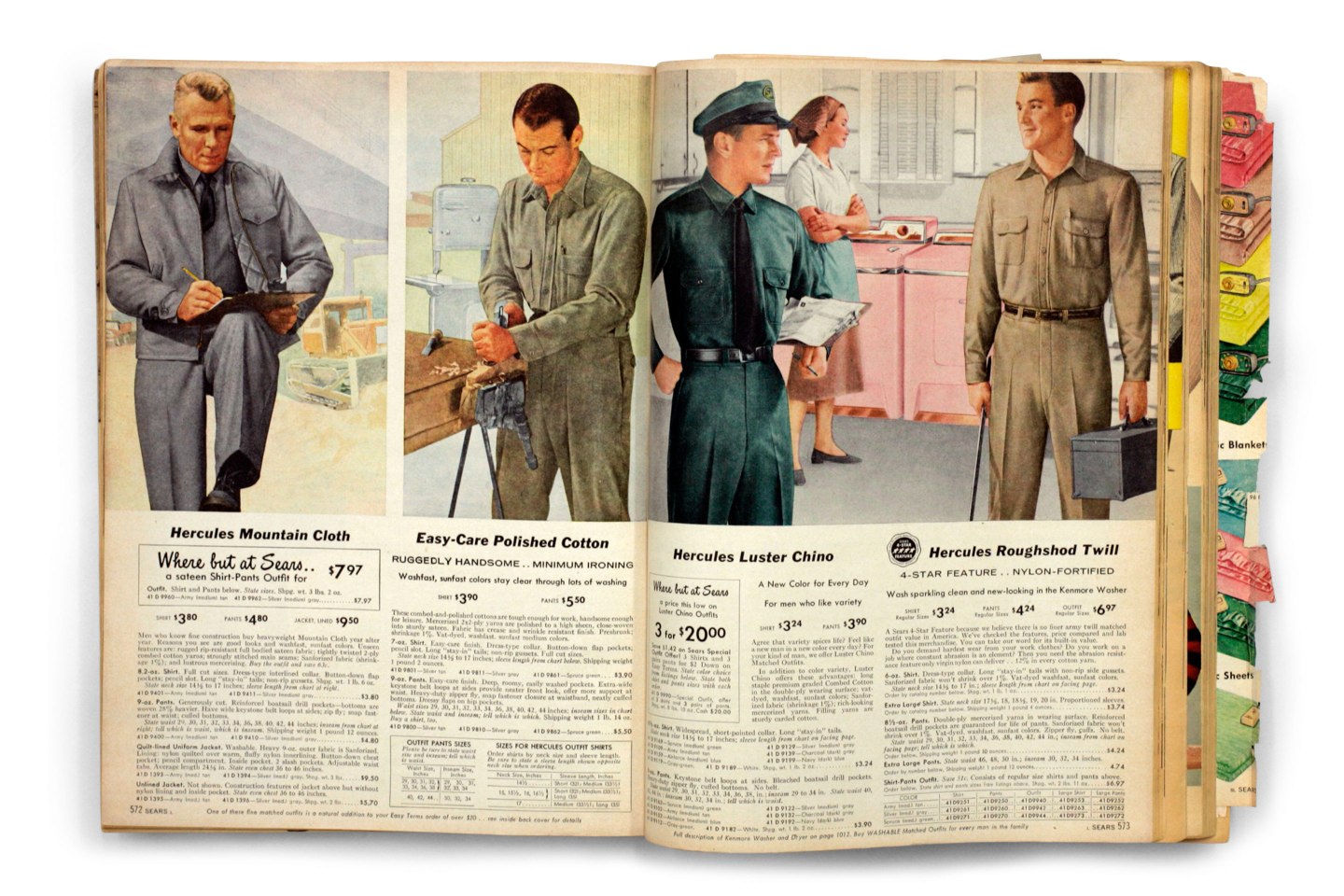 Fifty years ago, Sears was an economic dynamo, as dominant in retail as Amazon and Walmart are today. In 1969, Sears sales alone accounted for 1% of the entire U.S. economy, and two-thirds of Americans shopped there in any given quarter. Even 30 years ago, it was America’s largest retailer by a significant margin.

Those days are gone, of course. Sears Holdings filed for Chapter 11 bankruptcy last October, and the company has closed thousands of stores since the turn of the century. Fortune captures the sweep of that decline this month in the feature “Sears’ Seven Decades of Self-Destruction.” Here, we examine four arenas where Sears used to hold winning hands, and show how the company misplayed them all.

I. HOW THE WEB WAS LOST

Sears could have been an e-commerce contender; here’s why it fell behind.

A massive customer base. A vast distribution network. Enormous clout with vendors. That describes Amazon today—and Sears 30 years ago. Thanks to those advantages, e-commerce dominance was arguably Sears’ to lose.

Sears was a catalog-only retailer for decades before it opened its first store in 1925. At its peak in the 1980s, the catalog division was a $4-billion-a-year business, perched atop a huge trove of customer information. But by then, the cost of mailing a 1,500-page catalog, known as the Big Book, along with the catalog’s emphasis on low-margin products, had made the business unprofitable. It was losing as much as $1 million a day.

In 1993, Sears pulled the plug—and dismantled the distribution infrastructure while failing to keep updated customer lists. When Sears finally launched an e-commerce site in 1997, it had to rebuild many fundamental elements from scratch, a time-consuming and expensive undertaking.

Despite the slow start, Sears became something of a digital-retail pioneer. Sears.com offered in-store pickup for e-commerce orders years before Macy’s or Target did. The site boasted great search functions and even offered “virtual models” to help customers try on clothes online.

But Sears.com, alas, was still part of Sears. By the late 2000s, Sears’ merchandise assortment was so lackluster that no amount of online wizardry could lure new customers. And the closing of scores of stores deprived Sears of the visibility that sustains retailers’ “bricks and clicks” strategies. Between 2013 and 2017, as Sears’ fleet shrank from 828 to 570, e-commerce sales fell 50%, to $1.3 billion, according to eMarketer.

The retailer’s portfolio of aging mall stores put the “ick” in “brick-and-mortar.”

After engineering the 2005 merger of Kmart and Sears, Sears Holdings CEO Eddie Lampert made it clear that he would prioritize e-commerce over department stores. He followed through—so much so that both sides of the business suffered. “When you’re a $50 billion brick-and-mortar retailer, you can’t just ignore your brick-and-mortar portfolio,” says Mark Cohen, director of retail studies at Columbia Business School and a former CEO of Sears Canada.

Between 2005 and 2012, Sears spent only about $3.3 billion on capital improvements to stores. (Sears bought back $6 billion in shares over that time frame.) Its immediate rivals, including Walmart and Target, outspent Sears five to one on a per-square-foot basis, according to analyst estimates.

Cutting off funds for even basic upkeep created a vicious cycle in which stores grew shabbier and shabbier, making them less likely to generate revenue that could be used to spruce them up. But closing decaying stores didn’t drive traffic to Sears.com; nor did closures help the stores that remained. Indeed, Sears Holdings never enjoyed a single year of comparable sales growth, a metric that strips out the impact of newly closed stores.

Lampert and his predecessors experimented with stores modeled after nimbler competitors. In 2003 the company launched the Sears Grand prototype—smaller, “off mall” locations with food and pharmacy offerings. Alan Lacy, the CEO of Sears from 2000 to 2005, says the typical Sears Grand pulled in between $45 million and $65 million a year—more than twice as much as some mall-based stores of double that size. But Sears ultimately opened only 12 Grands—too few to blunt the impact of red ink and peeling paint elsewhere.

Why homeowners stopped building their kitchens and their credit histories at Sears.

For decades, Sears was homeowners’ go-to place for big-ticket appliances like washing machines and ovens. In 2001 it commanded 41% of the U.S. appliance market; as recently as 2013, that $12 billion business gave Sears a 29% market share.

Appliance revenue today is a fraction of what it was in its glory days. And Kenmore, Sears’ former crown-jewel brand, has been spun off into a separate holding company whose products, ironically enough, you can buy on Amazon.

What went wrong? Sears built its dominance in appliances in part on its credit card business. As recently as the 1970s, legions of consumers built their credit ratings by buying appliances with Sears store cards. But the growth of Visa and Mastercard loosened Sears’ grip on that channel.

More crucially, big-box competitors Home Depot and Lowe’s started spreading in strip malls more convenient for shoppers. Strip centers had fewer restrictions on loading docks than traditional malls did, enabling the new players to offer more large goods like lumber and making it easier for customers to cart them away. Stuck in mall stores, Sears could never seriously counteract their incursions. Lacy, the former CEO, notes that Sears looked very hard at buying Lowe’s during his tenure. “That is the one that got away,” he laments.

As recently as 2015, Sears technicians were visiting 8 million homes a year for appliance deliveries and repairs, gathering valuable customer info. This offered Sears a head start in the smart-home and smart-appliance markets. But worsening financial woes kept Sears from following through in “home services,” and Best Buy and Amazon now dominate that arena.

IV. APPAREL AND HOME GOODS: THE SO-SO SIDE OF SEARS

When shoppers prefer thrift stores to your mall stores, you’ve got a problem.

Sears’ huge appliance and tools businesses distinguished it from rivals like J.C. Penney and Macy’s, which were best known for apparel. The problem: People buy a fridge or power drill only once every few years, while they stock up on clothing three or four times a year.

In the 1990s, then-CEO Arthur Martinez tackled the dilemma by committing Sears to selling higher-quality apparel and home goods, supported by the clever “Softer Side of Sears” ad campaign. But the retailer never caught on with consumers in those categories. “Sears struggled with brands not wanting to be associated with it,” says Chad Bright, a former Sears online apparel executive and a sector leader for big-box stores at Gartner L2. Penney’s and Macy’s pressured better-known vendors that sold in their stores, urging them not to overexpose themselves by selling through another chain. The fact that Sears simply wasn’t known for fashion scared others away.

Even when Sears did lure desirable brands, its increasingly dumpy stores hurt momentum. A 2010 partnership with fast-fashion retailer Forever 21 didn’t go far; in 2011, even peak Kardashian mania couldn’t keep the Kardashian Kollection from flopping. Things got so bad that in a 2016 survey, female shoppers said they preferred thrift store Goodwill over Sears for clothing.

Bad timing undid one “what if” partnership. Former CEO Lacy says that in 2004, he was in talks with Martha Stewart, who had a successful product line at Kmart, to create home goods for Sears. The talks were scotched by Stewart’s conviction on charges related to an insider-trading case. “We were darn close to getting that done—then Martha goes to jail,” Lacy says. “That was a bit of a snag.”

A version of this article appears in the June 2019 issue of Fortune with the headline “Seven Decades of Self-Destruction.”

—CVS wants to make your drugstore your doctor