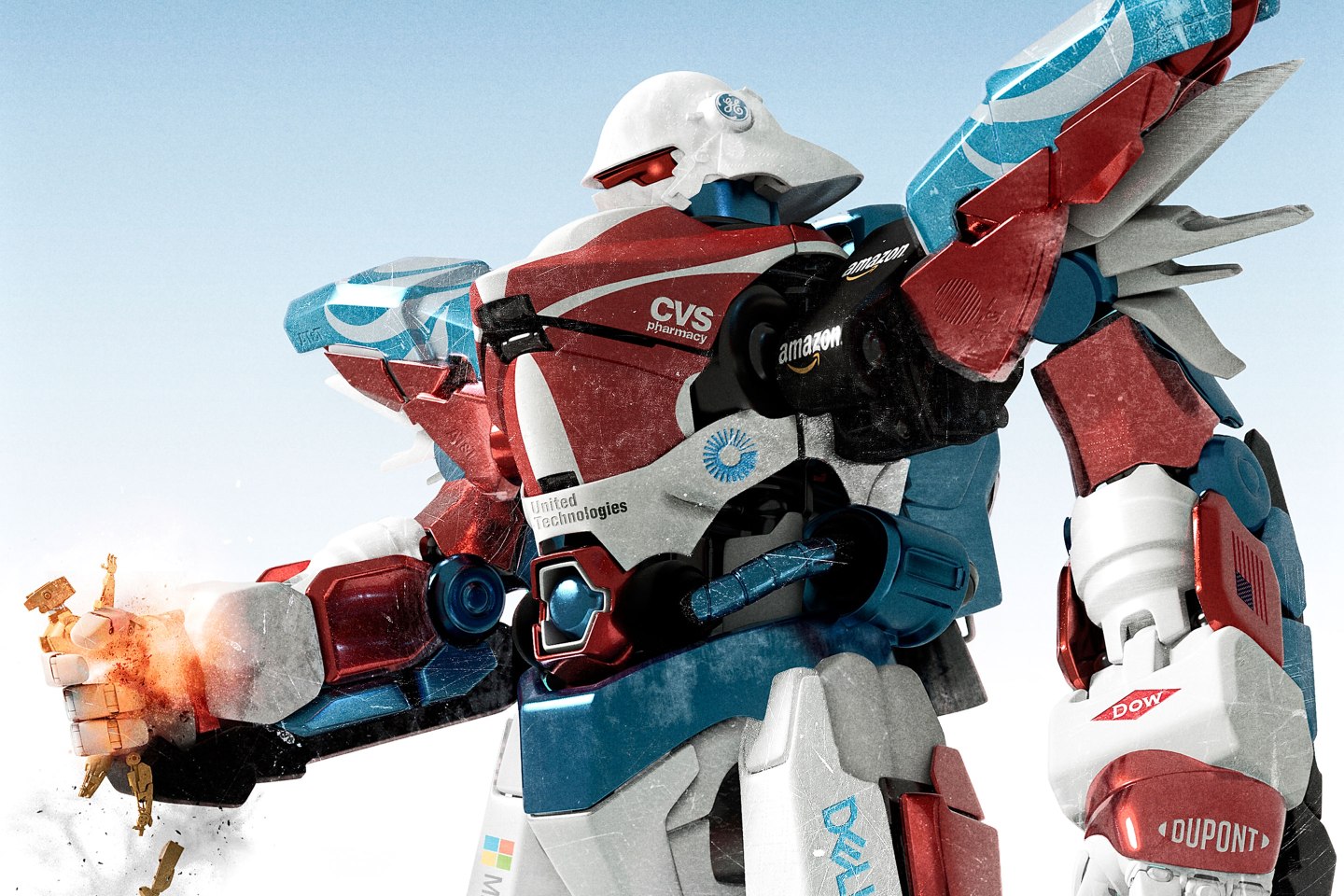 It’s well understood in the United States that in recent decades, the spoils of the nation’s economic growth have gone disproportionately to the wealthiest few. But a similar phenomenon exists among U.S. corporations. More and more of their collective revenues are concentrated in a relatively small number of large firms: the corporate giants.

It’s quite possible that next year they’ll account for a solid half, given recent developments in this land of giants: CVS Health, the drugstore chain–cum–pharmacy benefits manager (No. 8 this year), late last year gobbled up Aetna, which as one of America’s largest insurers ranked No. 49 on the Fortune 500 in 2018.

AT&T (No. 9), meanwhile, swallowed up Time Warner, a $31.3 billion morsel from the entertainment industry (HBO, Turner Broadcasting, Warner Bros.) that ranked No. 98 last year. And Marathon Petroleum (No. 31) scooped up Andeavor, a Fortune 100 oil refinery.

Is this the natural evolution of an economy in which innovation and business acumen are duly rewarded? Or are there more worrisome forces afoot?

Economists cite varying reasons for increasing industry concentration—the extent to which industries are dominated by a few large firms—but agree it’s on the rise. (One need not be an economist to notice: Your Rite Aid is now a Walgreens; you can no longer fly US Air or Continental; you buy almost everything—including your Whole Foods groceries—from Amazon.)

“It’s unmistakable that concentration has been growing at a national level,” says James Bessen, an economist at Boston University whose research has looked at why the top tier of companies is pulling ahead of the pack. Bessen points to the role of information technology. Firms that have invested most heavily in proprietary software (incidentally, often the biggest firms) have emerged as clear winners in the current economy, experiencing productivity, sales, and labor force gains, he says.

Fiona Scott Morton, an economics professor at Yale who once worked in the Department of Justice’s antitrust division, homes in on the role of data, which she says “has a natural concentrating” effect. Data-rich companies can achieve economies of scale cheaply and further benefit from feedback and network effects—the more data you have, the better and more attractive to customers your product becomes, she explains.

As technology and data have reshaped the economy, she and others argue that antitrust enforcement—which may have blocked mergers of big players and helped spur innovation in the past—has all but disappeared. “We’ve been walking backwards at least 40 years, at the same time that there’s been this springing forward.”

Meanwhile, anticompetitive practices protecting the position of the largest firms have proliferated, adds Herbert Hovenkamp, a law professor and antitrust expert at the University of Pennsylvania. He points to the conduct of large firms that force employees into noncompete agreements, which effectively suppress wages by making it difficult for even rank-and-file workers to change jobs. He also singles out the tendency of Big Tech to buy up potential competitors as soon they come along: like Amazon snapping up Quidsi, the parent of Diapers.com, in 2010. “These startups are acquired before they can ever emerge as vibrant competitors themselves.”

Should we be concerned about all this? Economists warn there are significant costs to a top-heavy economy, in which the lion’s share of financial resources are concentrated into the coffers of a relative few: lower output, higher prices, reduced choice, and stifled innovation. Plus, that economic might often translates into political power that can enable the leaders to entrench themselves even further.

That the biggest corporate giants keep getting bigger has drawn notice, inspiring a burgeoning anti-monopoly movement. Much of the attention is focused on Big Tech; everyone from Elizabeth Warren to Facebook cofounder Chris Hughes has called for the breakup of Facebook this year. But the book might not be closed on CVS either: In April, months after the government approved its merger with Aetna, a federal judge ruled that he wanted to hear from parties that opposed it. “This is a matter of great consequence to a lot of people,” he said.

A version of this article appears in the June 2019 issue of Fortune with the headline “In the Land of Giants.”

—What the Fortune 500 would look like as a microbiome