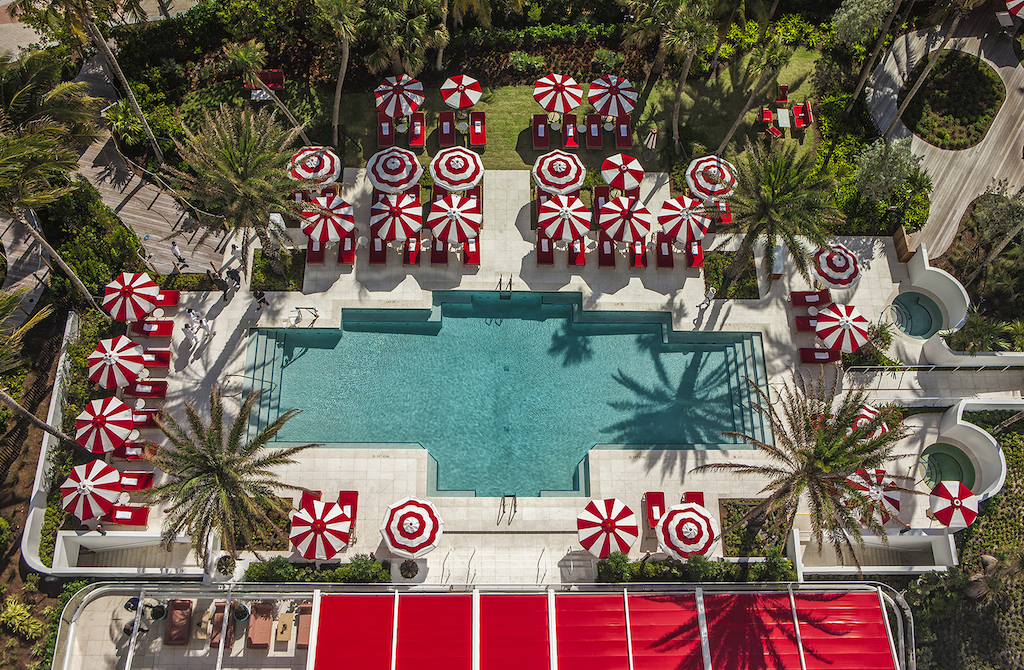 The Faena Hotel has been a sought-after destination for in-the-know visitors to South Beach since its hotly anticipated opening in 2015.
Courtesy of Faena Hotel Miami Beach

A world-class art scene, powder-white beaches, and a soigné vibe are just a few attributes that have long propelled Miami’s South Beach to the top of travel wish lists for discerning sun-seekers the world over—as evidenced by the record-breaking 23 million people who visited the city in 2018. And for culture vultures seeking a steamy respite from winter’s unforgiving icy clutches, a bold new production offers another reason to head to the sexy seaside mecca soon.

Faena Hotel Miami Beach, one of the city’s most fashionable addresses, has amplified its reputation for stylishly singular experiences with a dazzling new theatrical version of Peter Greenaway’s groundbreaking film, The Cook, The Thief, His Wife, & Her Lover. The visually stunning revenge tragedy—which stars Helen Mirren as the fed-up wife of a boorish crime boss who begins a torrid affair with a bookish guest at her husband’s London restaurant—artfully melds lust, food, and violence as it hurtles toward an unforgettable and grotesque end. The movie floored viewers and enraptured critics upon its 1989 debut, making Mirren a bona fide star in the process.

Now, thanks to the considerable creative vision of master hotelier and cultural impresario Alan Faena—an Argentine developer credited with transforming the once-abandoned docklands of Buenos Aires’s Puerto Madero district into an epicenter of cool—the show is becoming one of the hottest tickets in town, just as South Beach’s high season shifts into top gear.

The Sun Bar, one of the hotel’s alfresco gathering spots, serves an array of inspired cocktails and small plates well into the night.
Bill Wisser

The show’s international creative team, Unigram Theatrical, transforms the 3,000-square-foot Faena Theater—swathed floor to ceiling in rich red velvet paneling tinged with gold—into a seductive re-creation of the iconic film’s Le Hollandais restaurant. It’s “a place where opulence and indulgence shake hands,” a cast member proclaims as the delectable action begins to unfold. The show playfully blurs the lines between cast and audience, immersing guests in the story to entrancing effect: One minute, a dashing waiter takes your drink order with a flirty wink, and the next he’s belting out a ballad as the loutish thief and his long-suffering wife trade zingers at a table nearby.

Haute cuisine remains a central element of the reimagined retelling, enticing diners to indulge in an extravagant three-course feast as the narrative develops. James Beard Award–winning Michelle Bernstein, one of Miami’s most influential chefs, transports foodies across settings and time periods with decadent European fare prepared with a South Florida twist. “The first course—like us—came from the sea,” announces the cook, as the audience tucks into an elegantly deconstructed ceviche of grilled scallop, tuna sashimi, and saffron-infused leche de tigre. Later, a white chocolate sphere with passion fruit mousse and “bloody berry gelée” (a harbinger of the lover’s eventual fate) makes both a gorgeous and scrumptious dessert.

The show’s most compelling creative departure manifests itself in the music. The soaring soundtrack replaces composer Michael Nyman’s hauntingly elegiac film score with a rollicking medley of 1980s anthems—performed with winning gusto by the gifted cast—that bring an exuberant levity to the proceedings, even as they take a disturbingly dark turn. At one point, the wife and her lover sneak off to the bathroom for an illicit rendezvous to the fitting strains of Tiffany’s “I Think We’re Alone Now.” Other inspired selections include Fleetwood Mac’s “Everywhere,” Robert Palmer’s “Addicted to Love,” and Talking Heads’ “Burning Down the House.” Boy George himself composed the show’s eponymous original song, the ultimate tip of the hat to such an iconic musical era.

Alan Faena’s dazzling theatrical interpretation of “The Cook, the Thief, His Wife, & Her Lover” brings the acclaimed avant-garde film to life this winter at the Faena Theater.
Courtesy of Faena Theater

The show, which runs from Thursday to Sunday through May 2020, is just the latest excuse to experience the Faena Hotel Miami Beach, a stunning study in over-the-top opulence, even by South Beach’s exalted standards. Designed by a top-notch creative team that included Moulin Rouge director Baz Luhrmann and his wife, the Oscar-winning production and costume designer Catherine Martin, the 169-room hotel—formerly The Saxony, among Miami Beach’s first luxury resorts—made countless headlines upon its hotly anticipated opening in November 2015.

The hotel’s achingly chic ambience, infused with scads of South American sultriness, casts a spell starting in the lobby (referred to as “the Cathedral” in Faena-speak), where a series of eight larger-than-life, Baroque-flavored murals by Argentine artist Juan Gatti—the so-called “Michelangelo of the Faena”—set a showstopping tone. A magnet for a sophisticated clientele keen to luxuriate in its artfully outfitted rooms, kick back on its 100,000 square feet of pristine beachfront, or soak up a bit of its ineffable magic for a few fleeting hours, its considerable charms—both aesthetic and unquantifiable—are difficult to resist.

Just ask the standing-room-only crowd at The Living Room, Faena’s lushly appointed, close-quartered cocktail lounge that’s one of Miami Beach’s most exclusive haunts. Devotees are willing to queue up before the velvet rope in hopes of jockeying for space alongside a spirited mix of Miami glitterati, boldface names, and intrepid out-of-towners, all swaying and sipping to the infectious beats of its signature live music until the lights go down.

If you’re worse for wear the next morning after one too many margaritas—and you’re lucky enough that it’s Sunday—you’ve come to the right place, where the Sunday Asado Buffet is the brunch offering extraordinaire of the hotel’s Los Fuegos restaurant, Argentina celebrity chef Francis Mallmann’s first foray outside South America.

After sampling a smorgasbord of indulgences like fresh oysters, stone crab claws, and homemade pecorino-and-caramelized-onion empanadas, make a beeline for the outdoor grill, where smiling chefs serve up slow-cooked rib eye and salt-crusted wild salmon in the literal shadow of Damien Hirst’s “Gone But Not Forgotten,” a three-meter-high gilded woolly mammoth skeleton that takes pride of place a stone’s throw from the pool. It’s an apt juxtaposition in a setting where the raison d’être is all the world’s a stage.

—The most anticipated books of 2020, according to Goodreads
—Why this 100% sustainable sea salt is becoming a chef favorite
—The magic of the wedding industry’s most exclusive conference
—No-alcohol whiskey and gin alternatives
—The best travel destinations for every season of 2020