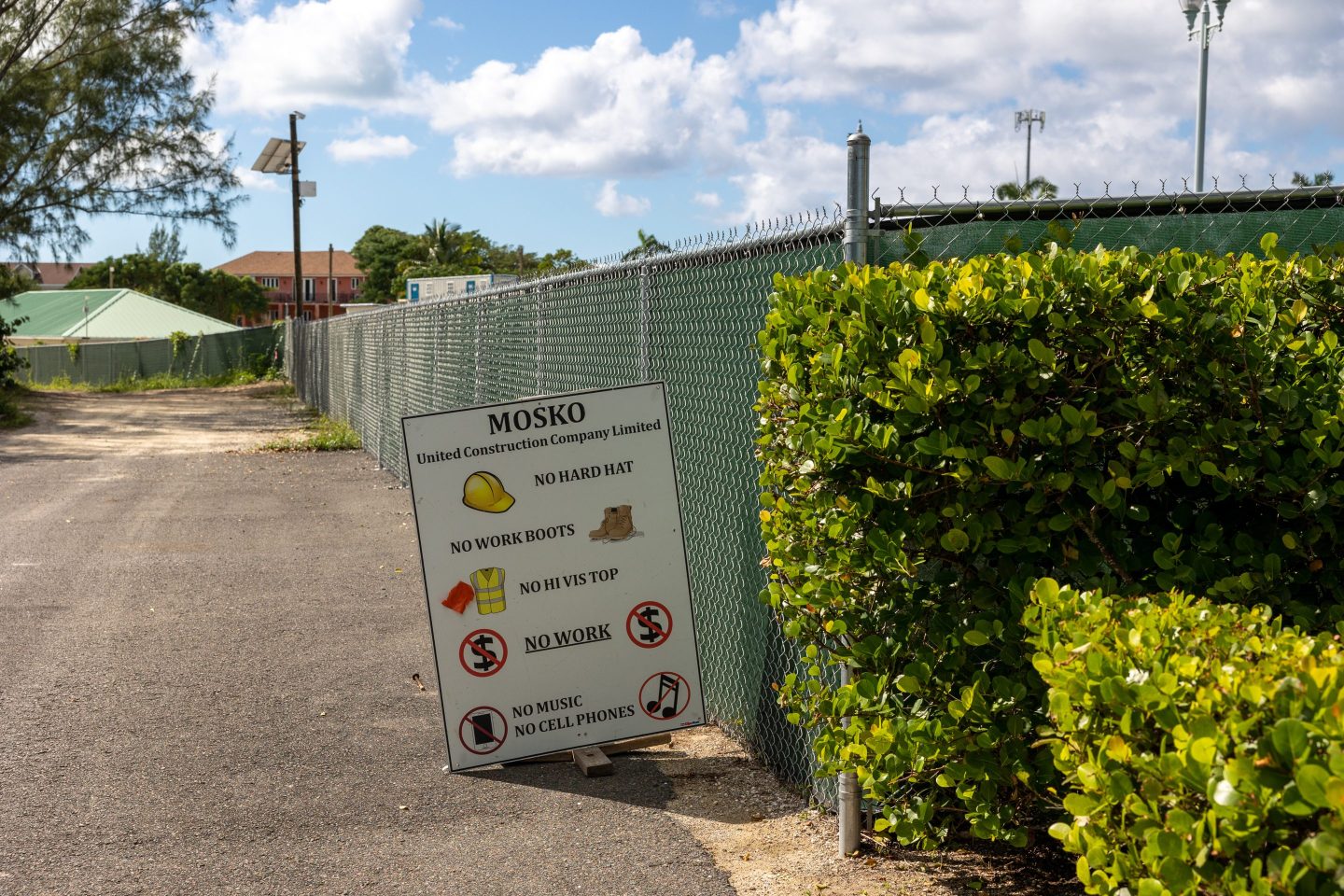 The abandoned worksite for the planned FTX headquarters in the Bahamas.
Leo Schwartz—Fortune

In April, as Bitcoin hovered around $40,000 and Three Arrows Capital and Terraform Labs still minted money, FTX broke ground on a $60 million headquarters in the Bahamas, with Prime Minister Philip Davis standing next to Sam Bankman-Fried for the occasion.

Davis touted the event as a sign that the Bahamas would become a hub for international companies, and that FTX setting up shop would help create some 400 domestic jobs.

Through local construction firms and people familiar with the matter, Fortune has learned that construction on the project never actually began.

“Nothing was ever done,” said an employee from Mosko, a Bahamas-based construction company hired to manage the project, who declined to be named. “Site setup, that was it. There was no excavation.”

FTX moved its headquarters from Hong Kong to the Bahamas in September 2021, citing the favorable regulatory environment. While company executives set up residences in the glitzy Albany gated community and opened offices in a nearby office park, they also planned for a more permanent location as the FTX empire expanded.

In January, the company revealed plans for the $60 million campus, with FTX Digital Markets CEO Ryan Salame telling the Nassau Guardian that the facility would house 1,000 people. The company chose an office park on the north side of Nassau overlooking the Caribbean, where they also planned to build a 38-room hotel and gym facilities.

As FTX’s presence in the Bahamas grew, the groundbreaking ceremony in April was an opportunity for the government to showcase its ability to attract a world-class company to the aspiring crypto hub. The Office of the Prime Minister released a slickly produced video.

“FTX Digital markets has left positive footprints throughout the Bahamas,” Davis’s voiceover declares. “Today, they continue to make positive impressions with the groundbreaking of their new headquarters.”

‘We set up a toilet’

In construction documents viewed by Fortune, FTX hired top architecture and engineering firms in both the Bahamas and the U.S., including N&M Architects, Gensler, Desimone, Bron, Graphite Engineering, and Terrain Design & Management.

Mosko, the Bahamas-based construction firm that FTX hired to manage the project, set up an office at the site, which was the extent of the development, according to the employee.

An FTX spokesperson did not respond to a request for comment.

Fortune visited the planned site of the headquarters on Tuesday, which is currently gated off with no sign of FTX’s presence. A security guard who works for the office park said that the full crew stopped coming about two months ago, and that he hadn’t seen anyone at the facility for at least a month.

The only lingering indication that it was a construction site was a sign next to the fence listing “Mosko United Construction Company Limited.”

Fortune went to Mosco’s offices at an industrial park near the airport. The owner of a neighboring construction company confirmed that the HQ project never started, saying, “We were waiting for the phone call to start sending trucks down with concrete.”

The Mosco employee said that they had not been to the site for a month, but said that Mosco had been in touch with FTX as recently as last week. They did not provide a reason as to why the project halted but did express disappointment.

“It’s unfortunate,” they said. “It looked like a nice project.”