When Satya Nadella was named the surprise choice to lead Microsoft in 2014, it was glaringly obvious the many things he was not. A computer scientist who had risen through the technical and general-management ranks at the software giant, Nadella was neither a founder like Bill Gates nor a big-personality sales leader like his predecessor, Steve Ballmer. He’d never worked in finance, another training ground for CEOs. And his stature on the global stage was nonexistent. What’s more, having joined Microsoft in 1992, he was thoroughly steeped in a dog-eat-dog Microsoft culture that had contributed to the company’s stagnation.

Today, Nadella wears the gaps in his résumé as comfortably as the jeans and blazers that are his corporate uniform. Key to his leadership style is a willingness to delegate, particularly to three powerful members of his management team: president Brad Smith, who runs policy and legal affairs; Amy Hood, Microsoft’s chief financial officer; and chief people officer Kathleen Hogan. Each cuts a wide swath in areas many CEOs call their own, a state of affairs that suits Nadella just fine. “I’m wired to be fairly confident in myself and to let others shine,” he says.

It’s not that Nadella lacks an ego, and the robust financial results his company has racked up give him undeniable bragging rights. The company earned $39 billion on revenue of $126 billion in fiscal 2019, while growing revenue at a three-year compound annual rate of 11%. Profits by the same measurement have jumped 24%. Microsoft is worth the once-unheard-of valuation of a trillion dollars.

Nadella credits Smith, Microsoft’s longtime general counsel and previously an outside lawyer to the company, for leading policy initiatives on areas from cybersecurity to ethics in A.I. and privacy. A roving corporate ambassador, Smith has deftly positioned Microsoft, once the scourge of Washington and Brussels, as the most thoughtful and least under attack of its Big Tech cohort. Smith is perhaps even better known in global capitals than Nadella. The CEO’s take on that? “Brad was a senior leader in the company long before I was a leader in the company.”

Hood was appointed CFO a year before Nadella’s promotion. He says she plays an outsize strategic role, particularly when it comes to capital allocation: “If you look at what was happening to Microsoft’s growth rates, we’ve had to go through the hard journey of not having growth to having growth at scale. That only happens when you can give oxygen to new businesses long before they become growth businesses.” A prime example is the company throttling back on its Windows franchise to pay for investments in its successful cloud business.

As for Hogan, a Microsoft sales consultant before Nadella promoted her in 2015, the CEO refers to her as the senior leadership team’s “conscience” and a “constant auditor” of the company’s culture, no small task in a Microsoft that Nadella has pushed to grow from a “know-it-all to a learn-it-all” mindset. Hogan has spearheaded tweaks to Microsoft’s HR approach, including revising the company’s forced-curve review system, which encouraged internal competition, to measurements that reward individual achievement and collaboration. “The amount of programmatic work that needs to happen in order to make cultural transformation an everyday exercise is a fairly sophisticated organizational capability,” he says. 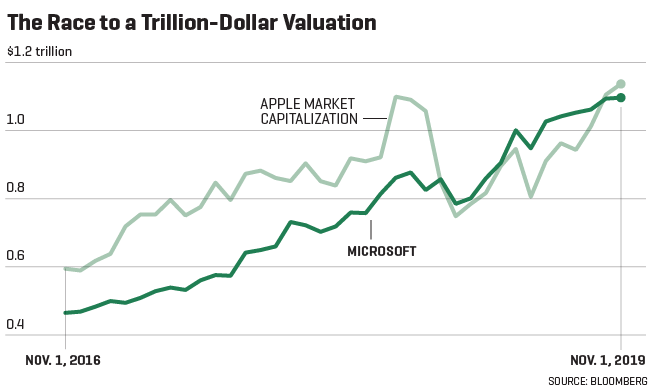 Microsoft’s recent win of a $10-billion cloud computing contract from the Pentagon encapsulates the team approach. Microsoft emerged as a technically competent bidder thanks to having invested heavily in a sector Amazon leads. It stayed out of a nasty inside the-Beltway fracas that tripped up others. And because Nadella heard out—and then overruled—employees who opposed working with the government, Microsoft didn’t face a rebellion that might have given pause to contract awarding officials.

“CEOs can only do what they do if they have an amazing team,” he says. “I’m blessed to have that.”

© 2020 Fortune Media IP Limited. All Rights Reserved. Use of this site constitutes acceptance of our Terms of Use and Privacy Policy | CA Notice at Collection and Privacy Notice | Do Not Sell My Personal Information | Ad Choices
FORTUNE is a trademark of Fortune Media IP Limited, registered in the U.S. and other countries. FORTUNE may receive compensation for some links to products and services on this website. Offers may be subject to change without notice.
Quotes delayed at least 15 minutes. Market data provided by Interactive Data. ETF and Mutual Fund data provided by Morningstar, Inc. Dow Jones Terms & Conditions: http://www.djindexes.com/mdsidx/html/tandc/indexestandcs.html.
S&P Index data is the property of Chicago Mercantile Exchange Inc. and its licensors. All rights reserved. Terms & Conditions. Powered and implemented by Interactive Data Managed Solutions.